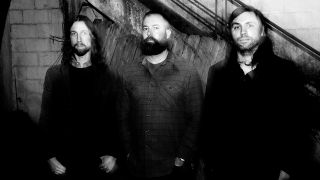 As the group stood on the cusp of the recording sessions for the new record, it turned out tackling their seventh album would leave them facing some big questions.

"What do you do when you’ve written seven albums? Do you pull a U2 and make an electronic infused record like Zooropa, or hire KRS-One to rap on your first song like R.E.M. did on Out of Time? Frankly, that’s not our style."

They found their answers in the work of the experimental pioneers who came before them – bands who've carved out their own path while staying resolutely true to their vision.

"We chose to stay the course like Fugazi, Lungfish, or Neurosis," the band say.

The result is a typically progressive, powerful record, that throws together exploratory jams, relentless riffs, bold experimentation, battle cries, as well as the odd "unapologetically straight-forward song". It finds them expanding their sound while building on a back catalogue of genuinely innovative music.

Here, the band talk us through Blood Year one track at a time.

"We don’t start the writing process for a new album with a lot of pre-conceived ideas of what we’re trying to create. We just let things happen and trust that if the music works for us on some visceral level, then it will work for other people too. But the one thing we talked about before we’d even finished writing our first song was that we wanted the album to crash out of the gate with something bold and assertive. Our last two albums both started with more somber, subdued pieces, and we really wanted to dive straight into the concentrated stuff this time around.

But then Mike showed us this really simple, meditative guitar part he’d written and we all fell in love with it, and then when it came time to sequence the album, the only place it really made sense was at the very start of the record. So I guess this is why we don’t spend a lot of time talking creative strategies on the front end, because ultimately we’re just gonna go with whatever sounds right to our ears."

"This was the first song we wrote for Blood Year and it went through about a hundred different permutations before we arrived at this version. When I was younger, I was a firm believer in 'your first idea is your best idea.' But I can say with certainty that this arrangement is much stronger after spending weeks and weeks fiddling with it. We tinkered and tampered with this song right up through the first few takes in the studio, and then it just sort of magically fell into place. The title is an homage to the band Sweet Cobra, who lost their guitar player Mat Arluck to cancer ten years ago.  They’ve been some of our closest friends in the Chicago music scene, and this song feels indebted to both them and the broader Chicago underground for providing so much musical inspiration to us over the years."

"Songs like Arluck involve a lot of exploring and modifying, but Milano just kinda happened. Mike had a few guitar parts that fit together and when he showed them to us at practice, we decided to just jam on them to feel it out and inadvertently banged out the song on the spot. There was some refinement on all our parts, but by and large, we really just jammed this one out after a couple of passes. I think we were all secretly fiending to write an unapologetically straight-forward song, and this is what we came up with."

"This one is the dark horse of the album. The opening sections of this song just feel so stark and bleak. I love how exposed and barren everything feels. We tend to try to completely saturate our sound and try to make this layered, symphonic experience, but with Kohokia there was more of a reductive principle at play. And that makes the pay-offs in the song that more triumphant. The whole song is a study in contrast."

"I’d actually written this piece on my baritone guitar back in 2011, but it’s always just sat on the backburner until we started piecing together the beginning of the next track Sinaia and we realised that there was a lot of melodic overlap.

As I mentioned earlier, we don’t really have a pre-meditated strategy to our albums, but we had all talked about making a more stripped-down and assertive album this time around, and I think Ghost On High is one of the few concessions to the more atmospheric and pensive aspect of our sound on Blood Year. I don’t think we could ever make a record that caters entirely to any singular dimension to our sound. There has to be a yin to the yang. So Ghost On High and Hunter Moon are the two moments of respite in an otherwise dense, relentless, and heavy album."

"This is another highlight off the album for me. I like our songs that offset the dark brooding vibe with a glimmer of hope or triumph.

I feel like the verses of this song sound like a battle cry, and then the middle of the song feels like crushing defeat, but then there’s this redemption with the triumphant riff coming back at the end. This is also an unusual one in that there’s a baritone guitar riff in here that’s been stuck in my head for nearly a decade, and it somehow magically fit in with Mike’s guitar part. And the riff that comes in around the four minute mark has been in our repertoire for years, and it finally found a home in this song. Ultimately, it feels like a song that took half-a-decade to write, but only because it had to gestate in our subconscious."

"We’ve always felt like we could do whatever we want on our records, and that open-mindedness meant we could write a song like Memorial or a song like 309 or a song like Praise Be Man or a song like Carpe and they’d all make sense together. But I think we we’re also aware that we like a specific kind of pacing and trajectory for our albums, and that usually means we close the album with a song that’s more reserved and melancholic. So this time we just put the most caveman, knuckle-dragging riff-fest at the end of our album just to mix things up. No keyboards or hip-hop cameos. You’re welcome."