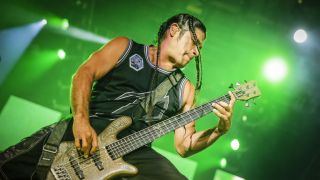 * Trujillo's big musical hero while growing up was Jaco Pastorius, the late Weather Report bassist. In fact, he has recently finished producing a documentary on him titled Jaco. This will open in November.

* He was the bassist on Judas Priest guitarist Glenn Tipton’s 1997 solo album Baptizm Of Fire.

* He played himself in the 1992 film Encino Man, appearing with the rest of Infectious Grooves.

* In 1998, Trujilo formed a short-lived band called Mass Mental?, with Benji Webbe then of Dub War. They released one album, How To Write Love Songs, but it only got a Japanese release.

Read about the day Metallica trolled the world

Read how Metallica rescued themselves from the brink