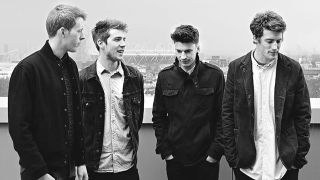 Having recently released their third full length album Dark Days, Canterbury (who are actually from Surrey) hit London to show us what they've got. Here's five things we learnt when we went to see the quartet in Camden.

Tonight’s openers are, it’s fair to say, not the most rock ‘n’ roll proposition you will ever see in your life. Coming across like four blokes who could just as easily work in HSBC flogging ISAs as appear live on stage in a sweat-walled venue, they nevertheless turn out a solid performance of mellifluous, guitar-driven storytelling. A lovely use of vocal harmonies and some deft guitar lines make this apt for fans of Counting Crows and the like. A fine hors d’oeuvre for what is to come.

BLITZ KIDS TRIUMPH IN THE FACE OF ADVERSITY

People are bastards - a fact to which Blitz Kids can testify first hand. A mere hour before they were due to perform tonight some chancer swiped a bunch of their gear, rendering them unable to give us their usual high octane set. To their immense credit, rather than cancel, they rally together and give us three songs of shimmering acoustic beauty. The crowd respond to the band’s tale of woe in the most beautiful way imaginable, the chorus of Never Die reverberating around the room in what turns out to be a genuinely heart-warming spectacle. Victory from the jaws of defeat never sounded so good.

While a sold-out Dingwalls tells its own story, it’s the reaction the young headliners receive when they amble on stage that is really revealing. Despite ‘only’ being at club level three albums into their career, there is a palpable sense tonight that they are a band of the people. Singer/guitarist Mike Sparks is visibly taken aback by what is unfolding in front of him; the usual ‘This is just unbelievable’ shtick that every band and their dog roll out ad infinitum has a real resonance tonight. It’s a pleasure to watch.

…THEY DO SOMETIMES COME OFF AS QUITE ONE-DIMENSIONAL THOUGH

While the response from the audience is rabidly enthusiastic, some of the fare they are fed is less than exhilarating. Although on record Canterbury are capable of big moments of rise and fall, in the live arena they seem a little more smoothed out and flat – there is surely room for more nuance here. That being said, bassist Luke Prebble’s voice cuts through proceedings like a hot knife through butter and provides a emotive focal point for what could otherwise be a slightly meandering set.

THERE IS STILL MORE TO COME FROM THIS LOT

While they opt to conclude their encore with a one-two punch of old-school favourites Gloria and Friends? We’re More Like A Gang, it feels as though Canterbury are still a band who are developing apace both in terms of songwriting and stagecraft. Sparks’ between song chit-chat is easier and more fluid than he has ever been in the past and songs from new album Dark Days clearly feel like the most ambitious in tonight’s performance. Canterbury are slow burners then, but this evening is another signpost forward for them.