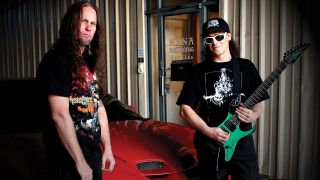 When you’re constantly trying to do things that are original and new, the creative process is different,” says Steve Tucker. “Originality takes time.”

It’s been six years since the last Morbid Angel album. Recently reinstalled as frontman with the band he led for three albums between 1997 and 2004, vocalist/ bassist Steve is well aware of the expectations surrounding the band’s latest creation, Kingdoms Disdained. One of the most seminal and legendary death metal bands, Morbid Angel cemented their reputation early on with classic debut Altars Of Madness in 1989 and maintained an almost mythical allure for two decades… until they released Illud Divinum Insanus in 2011. The first Morbid Angel album in 16 years to feature original vocalist David Vincent alongside omnipresent guitarist and creative chief Trey Azagthoth, its chaotic but gleefully subversive mixture of brutal metal, industrial techno and – most controversially – a Rob Zombie-style glam- stomper called Radikult, horrified many diehard fans. As a consequence, Kingdoms Disdained’s flat-out, uncompromising death metal assault will surely be hailed as a return to the real Morbid Angel sound. But Steve is having none of it.

“A lot of people would like to hear that there was a lot of drama around that whole thing, but we didn’t talk about that album at all,” Steve shrugs. “When Trey called me, I knew exactly what he wanted the next Morbid Angel album to be like. If he’d wanted it to be anything like Illud…, I don’t think he would’ve called me! I think the chemistry between Trey and I is different from the chemistry between David and Trey. The outcome of Trey and I is always going to be heavier and darker. That’s what I’m looking for in the music, and what I want from the music hasn’t changed since I was a teenager. I just want it to be kickass.”

Times have changed since Steve first trod the boards with Morbid Angel. These days, everything bands release into the online wild is inevitably pored over and picked apart. Kingdoms Disdained will doubtless be subjected to that same scrutiny, but Steve has every confidence that the response will be positive, even if it takes a little while.

“Every album I’ve been a part of with this band, it comes out and people are like, ‘What the fuck? What did you guys do?’ What I say is, ‘Well, what I think we did was make a badass album!’ Ha ha! Eventually time passes and people get back to me, saying, ‘Man, it really grew on me!’ It’s just a part of Morbid Angel. People expect something special and I think we’ve got that here.”

Given how thunderous and grandiose the new album sounds, there is obviously no paucity of confidence in the band’s ranks at this point. Reunions come with few guarantees of success, and Steve’s original tenure in the band was never as warmly embraced by the fans as the so-called ‘classic’, Vincent-led line-up of the first four albums, but this time around the chemistry between Steve and Trey is audibly off the scale.

“It all happened real easy, just fell into place!” Steve beams. “There wasn’t a lot of effort. It was the same old feeling, like when you see a friend you haven’t seen in years and it’s like no time’s passed. There was never a problem between us, so it was just really good to be around Trey, to hear the kind of things he was coming up with. We’re older, but we’re the same people in terms of what we want to do musically, and it still works.”

Part of the band’s unique appeal has always been the underlying sense of weirdness that Trey brings to his riffs, solos and song structures. Notoriously eccentric, he’s managed to establish a style that virtually no one has ever replicated convincingly, and it’s obvious that Steve remains a fan of his musical comrade and his ability to twist death metal into bizarre new shapes.

“When I first heard the song Paradigms Warped, I thought it was crazy! It had this off-the-wall arrangement, the riffs were off-the-wall, and the way they’re bouncing off each other was messing with my mind. But eventually, that thing that weirded me out? I embraced it, and now it’s the reason I love the song. Trey is always original and I love that.”

As keen as he is to praise his bandmate, Steve’s own contribution to the new album is equally worthy of acclaim. Kingdoms Disdained paints a bleak but vivid picture of a planet in disarray, the frontman’s lyrics and infernal bellow hammering the point home with poetic brutality. While not directly political, the songs seem to tap into the world’s current unease.

“Yeah, it pretty much sums up the world right now,” says Steve. “We live in this combative time. Any hope of rational dialogue is out of the window as soon as someone disagrees with someone else, and I just felt this negative air around me all the time when I was writing. We’re all still ruled by kings, people that have this great, dark plan, and we’re a part of it, like it or not. When you know that deep down, you become very unsettled, you don’t know what to believe, and that leads to a record like this. But it’s not doom and gloom. It’s just reality.”

Whether they choose to admit it or not, Morbid Angel have returned to salvage their reputation and to remind everyone who the real daddies of this death metal thing really are. The six-year wait was more than worth it: like Steve says, originality takes time, and there is still nothing else quite like Morbid Angel.

“In this band, we don’t sit and talk about the Kardashians,” he concludes. “We talk about ideas and concepts and theories. This has always been a search for knowledge. It’s always a deep conversation. That’s why the music ends up being so deep and so personal to us. It’s not easy to pin down because it’s always evolving. This thing we call Morbid Angel, it’s vast.”

Kingdoms Disdained is out Now via Silver Linings Music