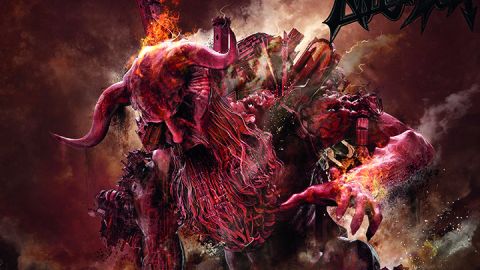 They were hardly going to make Illud Divinum Insanus again, were they? Dave Vincent’s departure and Steve Tucker’s return to Morbid Angel in 2015 elicited one firm expectation: that the legendary death metal band’s ninth studio album would mark a strident leap back into the balls-out underground metal territory that first defined them. Few albums have divided opinion like Illud… and while even its most mischievous moments made sense in the context of a deliberately subversive record, few diehard fans will shed a tear that Kingdoms Disdained contains nothing that sounds like Rob Zombie. Instead, this is guitarist Trey Azagthoth’s phoenix-from-the-flames moment, as he reasserts his authority as the single most gifted and unhinged virtuoso the genre has to offer. Steve’s input is undeniably important and he has never sounded quite as commanding as he does here, but this is Trey’s record: a reaffirmation of first principles infused with that pioneering lust for the sonically alien. From opener Piles Of Little Arms (what a title!) onwards, Morbid Angel sound exactly as we might expect. Riffs churn like Cthulhu’s writhing tentacles, pinpoint-precise blasts assail the senses and Steve’s guttural declarations provide a vexed blaze of tormented humanity. With shades of 1995’s seminal Domination, slower tracks like Garden Of Disdain and The Pillars Crumbling tap into that haughty menace that made the original Vincent era so irresistible. Meanwhile, every last song here is superior to anything that Steve made with the band during his own first tenure. Where albums like Heretic were patchy and chaotic, Kingdoms Disdained is streamlined, grandiose and utterly complete. The wild, wayward solo that Trey unleashes towards the end of the closing The Fall Of SOFTWAREmark” gingersoftwareuiphraseguid=“fd0883de-2a19-41b7-947a-1b4ec6887df4” id=“e3653d58-0435-466a-a0e9-b1b49fd1834e”>Idols says it all: no one wields the demonic spirit of death metal with anywhere near the same sense of power and mastery. Regardless of where you stand on their, er, industrial disco period, this is one seismic motherfucker of a comeback.