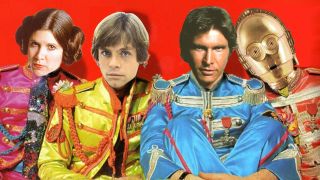 In a year that marks the 40th anniversary of the original Star Wars movie and the half-century celebrations of The Beatles’ classic Sgt. Pepper album, musicians Jude Kelley and Dan Amrich, AKA Palette-Swap Ninja, have combined the two cultural landmarks into an almighty, psychedelic space opera entitled Princess Leia’s Stolen Death Star Plans.

The album’s lyrics now tell the story of the first Star Wars movie, while the music has been completely re-recorded. “The title song sets everything up with the pursuit of Princess Leia on the Tantive IV, says Kelley. “She’s Leaving Home hits just as Luke decides to follow Ben to Alderaan, and the circus atmosphere of Being For The Benefit Of Mr. Kite is the perfect parallel for Mos Eisley.”

“It’s the entire Beatles album as accurately as we could record it,” say the pair, “only now it tells the story of Star Wars: A New Hope — in order. We sweat the details on both sides in an effort to do both cultural milestones justice. Writing hyper-specific lyrics that match the original songs’ cadences; reverse-engineering everything the Beatles recorded, from distorted saxophone riffs to Indian tabla rhythms; recording everything from scratch and learning as we went — well, that’s what takes five years.”

“Recording all our music from scratch has always been part of the Palette-Swap Ninja process; it wouldn’t feel right to just use karaoke tracks,” says Dan. “And we hand-craft our lyrics, down to each syllable. Making sure the words hit the right rhythmic cadence and told a coherent story – and would make fans smile – took more than a year.”