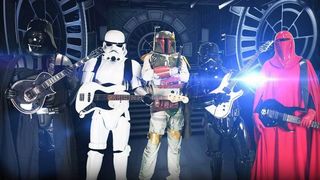 We’ve seen it all here at Metal Hammer. Adventure metal, pirate metal, Ned Flanders metal… but what happens when riffs go to a galaxy far, far away? Allow Galactic Empire, Rise Records’ latest, Star Wars-themed signing, to fill you in. In the interests of keeping things all cloak-and-lightsaber (or maybe because his phone was broken), lead guitarist Dark Vader (or Chris Kelly, as his mum knows him) would only answer our questions over email. To our surprise, he and his bandmates – Boba Sett on the drums, Bass Commander on, er, bass, and guitarists Shadow Ranger and Red Guard – didn’t meet at a Star Wars convention, but rather, when Chris interned at Boba and Bass’s recording studio.

“Our mutual love for Star Wars is coincidental, but having maintained our friendship over the years, it was a natural conclusion to pursue this idea,” he says.

They don’t take their passion lightly, either: “We purchased costumes, hired a whole film crew to shoot two music videos with full-scale production quality, dissected 11 orchestral scores to rearrange and re-record, and flew across the country to play on the E! red carpet during their Academy Awards coverage,” he continues. “We’re in the process of building our own redesigned costumes, assembling an extensive live rig, programming a professional light show and scheduling tour dates. Putting all of that in writing makes me realise how ridiculous this whole thing has been.”

Quite. Their self-titled debut album contains riffed-up reworkings of the classic Star Wars soundtrack, and Chris says Boba and Bass spent “months separating each section of the original orchestrations and making sure nothing was overlooked. That process was far more difficult than acquiring the proper licensing.”

It wasn’t a job for novice musicians, so it shouldn’t come as a surprise that all of Galactic Empire’s members are, or have been, in other bands.

“Red Guard and I are in a technical death metal band called Alustrium, Shadow Ranger is in a hard rock band called Unparalleled Height, and Boba is widely known as the original drummer for This Or The Apocalypse,” says Chris. “Metal is very much in our blood.”

So what’s the plan for galactic domination? “Our goal is to take this band as far as it can go,” he replies. “We want to play in as many places and to as many groups of people as possible. This band possesses the potential to transcend the boundaries of the traditional rock band because it comes with a built-in audience. We’d fit just as well at Download as we would at Comic-Con and I think that’s really cool.”

Oh, and their favourite Star Wars film? The Empire Strikes Back.

GALACTIC EMPIRE IS OUT NOW VIA RISE. THE BAND ARE TOURING THE UK THIS MONTH