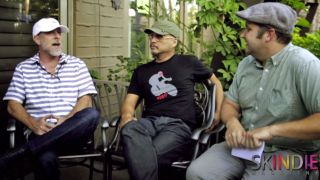 The Boston rock icons are often credited with creating the dynamic sound that inspired Nirvana and countless other acts.

But Santiago says they didn’t invent it – they simply adapted it from other sources.

He tells Skindie: “I don’t know, that thing… we took it from Beethoven. And the Star Wars theme. That’s loud/quiet/loud right there.”

Drummer Dave Lovering adds that he only realised how much of an influence Pixies wielded when they reformed in 2004 after a 10-year hiatus.

He says: “At Coachella in 2004 that was the first time the realisation for me, when we went out and played there was a sea of kids who weren’t even born when we were a band. And yet they would sing along to every word. It was quite a surreal experience.

“There are still 15 and 16-year-old kids coming to shows. We’re a very fortunate band.”

Pixies released Indie Cindy in April – their first album in more than 20 years.