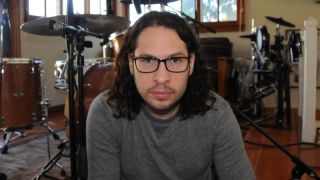 In the three and a half years since My Chemical Romance called it a day, Gerard Way, Frank Iero and Mikey Way have all returned to the limelight to varying degrees. Gerard released a solo record, toured the world and has made further strides in the comic book world. Frank is barely off the road or out of a studio, seemingly working on multiple projects at all times. Mikey’s frequent collaborations and Electric Century projects have kept him busy and visible.

But the band’s guitarist, Ray Toro, has been more of a mystery. His forays onto social media are infrequent and while there have been occasional glimpses of the music he is working on, he has kept largely himself to himself. Until now.

If you want to know what life has been like for Ray since My Chemical Romance split, then all you have to do is listen to the album he has been working on for all that time. Because though he says his debut solo album, Remember The Laughter, has a light concept – a middle-aged man finds an old memory box which reminds him of past loves and losses – in reality it is all about the life he has led for the past three and a half years. “There were times,” he says of his record of that time, “when I thought I was getting too personal, too revealing. I had to get past that.”

There has always been an enthusiasm about Ray Toro. He talks excitably about most things: positive, polite and passionate. When he talks about Remember The Laughter, though, another p-word comes in: pride. The record is, in some ways, a surprise. It is rare for a guitars to be to the fore – though occasional thrilling solos burst free – and the rest of the album draws inspiration from people like Peter Gabriel and Phil Collins, Gotye and even The Cars as Ray plays with synths and strings. The focus is on songwriting and layering sounds, on making complex arrangements sound simple. In a lot of ways it sounds like an update on the classic pop-rock of the ‘80s.

“I went through a few different phases,” says Ray. “I wrote some aggressive stuff, some songs that were more straight up punk songs, I did all that. But for this record, and what I was trying to say about my life in the past three and a half years, this idea felt like the best way to communicate that.”

Its lyrics chart the course of Ray’s life since the split of My Chemical Romance. It’s been a reflective period for him. He and his wife had their first child, a son, and Ray found his focus shifting from himself to his family. His wife went back to college to earn a masters degree, leaving Ray by day as the stay-at-home parent. And in that time, he had a good think about his former life. The record, as a result, is much like the memory box of his light concept.

“Now, a lot has changed – I can look at things more nostalgically. This record is in some ways all about that, it’s about the past three and a half years of my life.”

The songwriting process starts for Ray in an unusual place. “My wife laughs at me about this but I love doing the dishes, sweeping and vacuuming. I like it because I find my mind wanders and my brain comes up with these vocal melodies while I’m doing it. Anything that sticks, I’ll record on my phone, then I’ll head into the studio and work until three or four in the morning on it.”

He recorded the album himself in his house, playing nearly every instrument on it too. Former MCR drummer Jarrod Alexander helped with the rhythm tracks after Ray played the basic drum parts himself – “He does his thing and makes it a lot better,” says Ray. It was a steep learning curve, and Ray found himself going back over and over his tracks to improve them. It shows, particularly in melodies which are strong enough to lodge in the head for days (particularly on the opener Isn’t That Something and the blues rock stomp of We Save). The album, as a result, is something of a grower.

“It was very iterative,” he says. “It’s definitely hard doing it all by yourself. Not having an engineer or a producer meant I would question a lot of times whether something was good enough.”

He struggled most of all with the lyrics and vocals, having only written scant words of poetry before and never having been a lead singer. “As a singer, you’ve either got it or you haven’t,” he says. “I straight-up don’t have it. I had to work really hard. Having worked with a guy, Gerard, who is a complete natural, it made it pretty clear I have no idea how to do it! I tried my best, so hopefully people dig it. I tried to take a lot of mental notes from Gerard over the years.”

Lyrically, he explored different options. He attempted to write metaphorically and found that it didn’t feel real. Instead, he says, “writing the songs personally was the only way I could do it.” There were times, though, that presented different problems.

“There were definitely times I checked myself,” he says. “I’d be writing and think, ‘Is this opening up a bit too much’. I’m a pretty private person but when you’re writing lyrics and singing, the best stuff only comes when you open yourself up as much as you can. There were times I thought I was getting too personal, too revealing. But when I listen to music, I want to hear the artist showing who they are in the music. So I had to get past it.”

It means the album is shot through with references to Ray’s family. “Walking In Circles is about my wife and my desire to spend the rest of my life with her,” he says. “Remember The Laughter is me thinking about how I might say goodbye to my son later in life, thinking about what I would tell him before I pass.

“My wife and I talk a lot about what the world is like now, about what sort of kid we want to raise and how we want to see him treat other people. All of that is on the record.”

So, as a result, there’s politics too – and Ray’s fears about a Trump administration have been clear in his recent posts on Twitter. “For The Last Embrace is about what I was seeing in the news, Hope For The World is about Ferguson and the riots.”

There is also Ray’s own childhood on the record, and references to his relationship with his parents. “The Great Beyond is about a son moving away, going on a journey, not talking to his parents in years, then coming home and wishing he had spent more time with them. I feel that about my childhood, I wish I showed my parents more appreciation.”

He speaks movingly about his mother, calling her “the rock of our family”, and saying even a simple birthday card from her can bring tears to his eyes. “She expressed her feelings by writing them down, and it’s similar for me. I’m not the best talker, I’m pretty quiet, and I think the album gave me an opportunity to express my thoughts in what was almost a safe place. It felt very freeing to do it that way.”

If there is a positive to come from the break-up of My Chemical Romance, it has been in seeing the four personalities of the key members of the band emerge since. Frank’s music has been, like him, intuitive, heartfelt and in the moment; Gerard’s quietly ambitious and artistic; Mikey’s sleek and cool. Ray’s album feels a lot like him too: it is considered and thought-through, meticulous and understated.

“I see it the most in Frank,” agrees Ray. “I feel that the last record he put out, Parachutes, is the record he’s always wanted to make. Some of mine is a surprise, I guess – people might expect more guitar playing from my record – but people who know me would say I’m more considered and I there’s a focus on the musicality of it. That’s the sort of thing I hold in high regard and it’s in the record I made.”

He played his record to his former bandmates, asking him their opinions as he made it. “We’re all in communication,” he says. “Gerard was integral to this and was someone for me to bounce ideas off. I often went to him to ask if the vocals felt authentic and he was very helpful with that.”

He is releasing the record himself on November 18 and is in rehearsals with a nascent band who have plans to tour early next year and to add more shows for the end of 2017.

There is something appropriate about the fact that he will be the last of the gang to head out on his own and release his solo record: quiet, thoughtful, thorough Ray – the one who took his time to make sure he got it just right.

Remember The Laughter will be released on November 18.