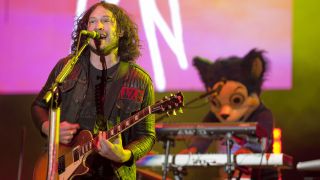 RECENTLY, RAY Toro was in his loft. He was looking through his old My Chemical Romance memorabilia – backstage passes from that world tour, posters from another show, outfits from video shoots – and he was having a think about his time in the band.

He had been asked to donate something to a charity event in support of the Make A Wish Foundation. The organisers wanted something unique, if possible, but something small he might not miss. Instead he offered the iconic motorbike helmet he wore in the Na Na Na video and as part of his character within the Danger Days album concept. It blew the organisers of the event away.

That he was quite so generous says two things about Ray at the moment. The first is that he hasn’t changed since his days in the band. Always friendly, humble and unfailingly polite, he was often the most approachable of an already approachable band. A kindness like this was always the sort of thing that defined him.

But the other thing his donation says about Ray is just as interesting. Because while the guitarist was up in that storage space, looking through old memories, he came to a realisation: that it was time to let the past go and move on. It was time to put My Chemical Romance behind him. It was time to let people see another side of him.

“I’ve been in this kind of transitional phase in my life,” he says. “I’m moving on from the past and paring things down.”

And what he’s got coming next might just be a surprise to everyone.

WHEN MY Chemical Romance broke up in March 2013, the one member of the band with the most on his plate was Ray Toro. After decompressing, his bandmates all returned to music – Frank Iero with his hardcore and variety of his solo projects, Mikey Way with his new electronica-ish project and Gerard Way with his forthcoming solo album – but Ray had other things to handle: he had a baby.

When Ray talks about something he cares about, he finds it impossible to keep the enthusiasm out of his voice. He used to do it when he talked about albums, speaking in delightfully rapid-fire sentences about The Black Parade or excitedly bubbling about Three Cheers… perhaps. He does it now about his son.

He thinks the timing of his son’s arrival was perfect – not only because it gave him something else to concentrate on but also because, without touring commitments, he was able to spend time with his and his wife’s new arrival.

“Having the band was such a huge part of my life but then I had something new introduced to my life,” he says. “The split was almost like a blessing in disguise because, without the band, I was able to be home and be a part of my son’s life in a way that some of the other guys didn’t get a chance to – they were touring when they had kids. I felt like it came at the right time – it’s been great.”

That may be so, but dealing with the breakup of a band and having a new baby must have been a difficult juggling act.

“It was definitely interesting! But it was good because it was a way to channel energy, and it was really positive energy too. Having a kid is definitely stressful though – everything you do, you feel like you’re fucking up. You’re like: I don’t know how to hold him, I don’t know how to change a diaper! For the first day, you’re at the hospital and the nurses help you take care of him – then they hand you the baby and tell you to take him home. You almost want to ask them to come with you! You have to figure out how to put the kid in a car seat – there are so many nerves. But it was great.”

“I’ve been raising my son and enjoying time with him and the wife. I’ve had some nice family life that I’ve never had a chance to enjoy before because we were on the road so much. It’s nice to feel like we’re building something as a family. It’s nice to lay roots down rather than just work all the time.”

He’s also conscious that he’s lucky. When Gerard has his daughter, and when Frank had his twins, the recording and touring process for the band’s final complete album Danger Days was in process.

“Frank had his girls and we went out on the road, same with Gerard. At the time, I didn’t know what must have been going on in their heads when they were away from their kids for so long. They didn’t get to see their kids grow up like normal parents do. I definitely appreciate what they went through now and I feel so lucky that I was able to be home – even though it was under bad circumstances with the band breaking up.”

BUT RAISING a family is not all that Ray’s been doing. When a member of My Chemical Romance, the guitarist would helm impromptu recording sessions in the back lounge of the band’s bus – that’s how the seeds of The Black Parade were laid down. On tour, he would also spend time in his hotel room laying down guitar tracks simply for his own amusement. Recording became a hobby and it’s something he’s continued to do for past 15 months. It means that he has the bulk of a solo album sketched out. And he’s getting itchy to release it.

“I’m just putting demos together right now, I haven’t got into recording an official record yet, but this stuff feels like it will be on a record one day. I’m playing all the instruments myself and so it’s a lot to take on, but it’s all me.”

He has found the process challenging but interesting. In My Chemical Romance, his musicality was pared with Gerard’s imagination and Frank’s punk ethos to create their grand sounds. He would be the studio taskmaster, keen to get the best from the band’s playing and using his own technical and creative abilities to drive the music on. But he did it all within the context of a band who could support him. Working solo is a different ball game.

“Doing things on my own is such a huge change. Going from working with a group of people to writing the songs yourself is very different,” he says. “The biggest thing for me is writing lyrics and singing – that’s a whole different thing that I’ve never got into before. It’s been a challenge, but it’s been a good challenge. I’m trying things I never would have done before and I like taking on new things. It’s been fun.”

In May last year Ray posted one new song, Isn’t That Something, online. A neat, sprightly and polished piece of pop-rock writing it pointed to the direction in which he might be heading – namely a brighter, more immediate sound than My Chemical Romance’s but with similarly dominant guitars and a sense of yearning. Turns out it was a red herring.

“It’s kind of interesting actually,” says Ray of his new sound. “A lot of the songs are string-based – it’s not orchestral but it’s a bit different. I’ve been trying to find different textures to what the band used to do. There’s a lot of open space – ethereal is quite a good word to describe it. The people I’ve played it to have mentioned Peter Gabriel so I guess that’s the closest reference point. It’s very different and I think people will find it very surprising.”

He’s relishing the idea that it will take people by surprise. Those used to seeing him thrashing his afro at the side of the stage, or peeling out solos and riffs, will be getting a very different side of Ray now.

“I think what I’m most excited about is that it’s not something that people would expect from me,” he says. “In fact, I think that’s something you’ll see from all the stuff the guys are working on. I saw a cool comment on Twitter from someone saying they were bummed about the band breaking up, but that they were excited that they were going to get four records instead of one from us. I’m really excited to hear what the other guys are working on because all of us have our own hidden talents and we’ll see that come to fruition with everybody’s new records.”

Ray has been working to try and piece the music together live, potentially with the idea to play shows. “I’ve done a couple of rehearsals with a couple of friends and it definitely felt cool to do it live. Hopefully it will all come together,” he says. But mostly he’s thinking about recording it properly and releasing it.

“I’m kind of getting antsy to move things forward – but at the same time, I don’t want to put things out that aren’t fully baked,” he says. “I don’t want to wait too long because I think I’ve got some really great songs that I want to get out there. I’m still trying to figure things out with the label but if things don’t work out with them, I might shop it somewhere else or even just release it myself.”

THERE IS a certain symbolism in Ray’s donation of his Danger Days helmet just as he decides to step out alone. For the past year, he has been the most under-the-radar member of My Chemical Romance and now it seems it’s the right time to move on and step out on his own. Certainly he is going in a very different direction, his new sounds a leap on from his old music.

But as he does so, he has thought about what My Chemical Romance meant – in fact he has been a little surprised but incredibly touched that the band still means as much to the fans. When they announced their split last year, he was unprepared for the torrent of grief around the world, partly because he had never fully realised quite how much the band were loved.

“It sounds clichéd, but you never know about that stuff when you’re in the band,” he says. “Part of that is because you’re constantly working and touring, your energy is low and it’s hard to appreciate everything that’s going on outside your bubble. I didn’t know how much the band meant to people and the outpouring from fans afterwards was one of the really surprising things to me.”

For now, though, his thoughts are on the future. His excitement and eagerness to complete his solo project and get it out into the world is dominating his thoughts after a year spent settling down at home. But that doesn’t mean he doesn’t think about the past. And while he is rightly proud of what My Chemical Romance achieved, he says it is not the band that he misses so much but its members. Because between them, they shared something pretty exceptional.

“If anything, the one thing I miss is the guys,” he says. “Everything else aside, I miss the fun times we had together outside of music and outside of the band.”

In that case, you tell him, there’s really only one thing that you can do – get the band back together.

He laughs and takes the question as it was intended – a little bit of a joke. But then he says a last thing.