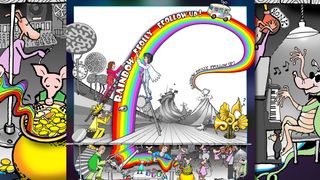 “Well, it’s really 49 years,” laughs bassist/vocalist Roger Newell. “Because we recorded it in 1967, although it was finally put out the next year.”

The English band actually split up in 69 after just a couple of years together, since which time all those involved – Newell, guitarist/vocalist John Dunsterville, his brother Richard on vocals/guitar and Stewart Osborn on drums/vocals – have been involved with many other projects; Newell and John Dunsterville, for instance were both part of Rick Wakeman’s English Rock Ensemble for a time, while Osborn worked with Gerry Anderson on his classic series Thunderbirds, Captain Scarlet and Joe 90.

“We have all kept in touch,” says Newell. “But over the years never thought about a reunion. Then Ray Bates, who runs Footprints Vinyl, sold his second original copy of Sallies Fforth for about £1000 a couple of years ago. He happened to bump into John shortly afterwards, told him what price he’d gotten, Then asked if he might consider doing a new album! John was taken by surprise, but called me and put the idea forward. I thought it might be fun, and we’ve gone from there.”

The only member of the band missing is Richard Dunsterville, who now lives in America.

“It was just too impractical to get him over. But as soon as the three of us got together and started playing, the whole sound was Rainbow Ffolly. We just got right back into our old groove. It was amazing.”

The new album, Ffollow Up, is currently available on vinyl only through Footprints Vinyl, and the material includes both newly written songs, plus older stuff. One, My Love Has Gone, even goes back to 1965.

“John wrote that track, and we did consider it for the debut, but for some reason it got left off. That was never because this wasn’t good enough, so this time we’ve recorded it. There’s also a song called Sky Angels which goes back to 1976, and was composed for the English Rock Ensemble.

“We’ve also got songs that connect back to our past. Bathers Of The Lost Ark has a laugh on it which we’ve directly lifted from Come On Go, the final track on Sallies Fforth. And Tour De Fforce is very autobiographical, with lots of references to the early days. That’s about our manager John Sparrowhawk. We don’t know where he is these days, but he would get what we’re talking about, and find it really funny.”

The album is very diverse, spanning the entire musical spectrum.

“I think there’s something here to suit everyone. What we do is let the song dictate where we go musically. The song is always the most important thing. But our sense of humour also shines through. And, so far the reviews we’ve gotten have been really good – better than for the first album. But what people don’t understand about that one is that it was a demo! We put it together and added sound effects to ensure we made our mark on whoever at EMI listened to it. But they loved it so much, the album was released like that. Much to our shock.”

One reason why the band were determined Ffollow Up should come out on vinyl first is due to the intricacy of the cover design.

“Most of this was actually done in 1969 by John. Which is why if you look closely you’ll spot Richard in there. He’s the guy in yellow. In those days, we all had particular colours we wore onstage, and that was his, because he had a calming influence.”

Rainbow Ffolly are currently negotiating for the album’s release on CD, and this will come with extra tracks.

“There are five more songs we’ve done which will be put on the CD version, plus remixes of Shoes and Is It Over. We want to make it worth people buying.”

But there are no plans for a tour.

“That’s just not practical. We’d have to have an expanded line-up to do the music justice, and that’s not something we want to do. But we are already working on the songs for a third album. This is an ongoing project for the three of us.”