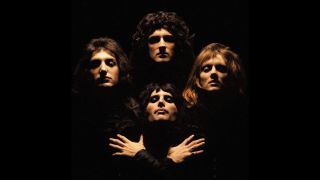 Brian May says he’s never got tired of classic Queen track Bohemian Rhapsody – but he doesn’t like talking about what the song is about.

The Freddie Mercury composition was released on October 31, 1975, and went on to become the third biggest-selling single in UK chart history. It’s been the subject of several affectionate spoofs, including the iconic scene in 1992 movie Wayne’s World.

May tells the BBC: “I’m not sick of it. You can’t complain that people want to talk about it all these years later.

“I still enjoy hearing it – if it comes on the radio I’ll turn it up and listen. But no air guitar. I’m too old.”

He adds: “I do think Freddie enjoyed the fact there were so many interpretations of the lyrics. It’s an outlandish song. I think it’s beyond analysis.

“I have my own ideas and feelings about Bohemian Rhapsody – but I hate talking about it and I generally refuse.”

Queen will release a limited-edition 40th anniversary 12-inch single of the track on November 27, after a 1975 live concert film goes on sale. The band are to receive the Living Legends Award at the 2015 Classic Rock Roll Of Honour ceremony next month.