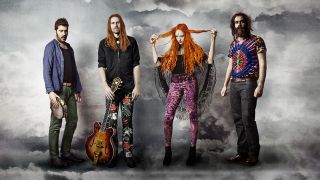 Multi-hued and mind-expanding by nature, the roving world of psychedelic rock has given birth to all manner of individual odysseys. Very few of those, however, are quite as immersive or as utterly transfixing as the journey London’s Dark Moon have just embarked upon.

Due out on November 25th via the aptly named Transcendental Grooves label, the four-piece’s debut album, Lost In Love And Fear feels like entering into a fully fledged if tantalisingly enigmatic world, where classic blues riffs are melded onto ritualistic grooves powering sumptuous atmospheres and navigated by the startling, wanderlust vocals of Lola Ulalume, her untethered, bluesy incantations possessing all the willful yet eerie qualities of a lucid dream.

Lost In Love And Fear is one of the most assured, self-possessed and seductive debuts you’ll hear all year and we have an exclusive preview in the mesmerising form of lead single, I Fly. A song whose propellant grooves are the motor for a nocturnal yet luminous flight into the ether and beyond, it’s both intimate and out-there, and it’s going to lodge itself deep into your psyche.

“I Fly,” says Lola herself, “is about spirit, the unknown, what can’t be seen by the eyes. A voyage out of ordinary reality, the senses are awakened and the seer is screaming for illumination.”

Put aside your bearings, step out into the stars and lose yourself in the immeasurable magick of I Fly below!

Dark Moon play their album launch show at The Brewhouse, London on November 30