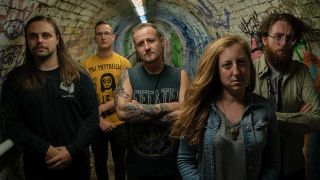 Due for release on Friday October 26, via Holy Roar Records, Loss is the band's debut full-length album, and the follow-up to 2017's Floodlit EP.

The album tries to capture the emotions associated with Loss throughout its 60-minute runtime, from the crushingly heavy riffs and desolate instrumentals, much of the inspiration was provided by the band's fans in the form of letters and audio clips. It's a deeply personal and inherently bleak record, but one that also offers hope in the darkness.

Pijn guitarist Joe Clayton dives deeper into the album, exploring each ode to loss below.

"Denial was the very last piece of music we wrote before recording the album; which is kind of interesting that it ended up as the ‘lead’ single. In fact, we put the finishing touches to the arrangement on the very first day of drum tracking. The whole piece hangs around a repeating klezmer-inspired melody that developed after playing a show with Constellation Records’ wonderful Jessica Moss. We wanted to write something that was punishing, immediate, and fairly brief – at least for us!"

"By far, Detach was the most difficult song for us to write, and features the most experimental recordings and processing work. We knew we wanted to feature vocals heavily, because we’ve never really ‘sung’ before, taking inspiration from electronic geniuses like Björk and Imogen Heap. Hopefully it sets the tone of the album nicely; a slow disco dirge for the end times."

"We wanted to finish the first side of the album with a piece of music that’s been a staple of our live sets since our first-ever show. It began life as a bluesy, almost film noir feeling shuffle, and somehow has transformed into this lumbering, aggressive thing. We try to use odd time signatures in a way that feels organic rather than showboating, and hopefully that lends an uneasy, drunken feeling to the song’s finish."

"Blanch might be the most divisive track on the album – we didn’t let ourselves get particularly heavy or dark, instead sitting on this hypnotic, awkward groove. When our guitarist Joe first wrote the main ‘riff’, none of us could understand how the hell it was supposed to work. In the end, it’s become a weird favourite, not least because we recorded drums at the bottom of a stairwell and used a sample from a gig in the 60’s as ‘vocals’."

"Blush hopefully captures all our different sides in a compact, flowing way – four different movements and moods, building through all the different emotions that we try to force out through our music. The closing string and lapsteel harmonies finish off the first disc of the record in a really satisfying way for us."

"We knew from the outset that we wanted to write a long piece that took up an entire LP side. And it needed to sit as the centrepiece of the record – repeating melodies from earlier in the album, using all the strange elements that we’d used elsewhere, like sampling and double tracking drums. The Hans Zimmer Inception bass tone that comes early in the track is probably our favourite sound on the album – it sums up Pijn pretty well. Loud, long-winded and aggressively bleak."

"This is another song that began life in a radically different way – originally it was a downtuned, Genghis Tron-inspired electronic dirge, all sharp angles and teeth. In the end, the majority of the performances for Squalor were largely improvised first takes. We wanted to capture some of the ‘broken-ness’ of the album recording process – we blew up four amplifiers, played on busted old resonators, and quietly captured takes while babies slept in the next room."

Squalor, much like Distress, has been a part of our live shows for quite a long time – we’ve really wrestled with the composition and tried to find the right feeling for the song. There used to be a loud, abrasive ending to the piece that we eventually killed – now it gives us a chance to end the album on an uncomfortable, drawn-out moment of reflection. When we play this song live, the audience often doesn’t know quite how to react, when to clap, or whether to stay quiet. Maybe they just hate it, which is fun.

Pijn release Loss on October 26. It is available to pre-order now.