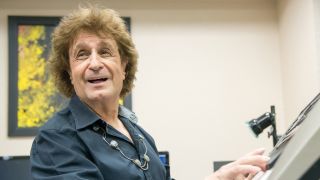 “Ah, 2015 is a fantastical celebration!” beams Patrick Moraz, recalling that years ending in five have generally been productive for him. And when he recalls, he totally recalls. Moraz, highly loquacious and enthusiastic, seems to remember not just what happened, but the very dates on which it happened. For example, he’s soon remembering that Yes’ manager, Brian Lane, invited him to a rehearsal “a couple of days before Nixon resigned in August ’74.”

“I had great empathy with Jon [Anderson] and everybody and we recorded Relayer for six weeks,” he recalls. “At the same time I also had to learn all this unbelievable material. Of course, I knew the arc of it, but nothing was written down and I had to integrate.

We recorded Relayer in six weeks. I came up with the intro to Sound Chaser in a day.

“I moved into a basement flat in Earls Court and every day went to Buckinghamshire to Chris Squire’s home, where Eddie Offord had installed the mobile studio,” he continues. “This was 24-track, state-of-the-art tech at that time. Every note was recorded. And that’s where I came up with the Sound Chaser intro, at Jon and Chris’ request, written and recorded that very day. Of course, by May ’75 we were opening our show with that song at QPR’s Loftus Road stadium. Every member recorded a solo album. I played on Chris’ Fish Out Of Water and Steve Howe’s Beginnings, and I made The Story Of I, which still blows people’s minds…”

The Swiss-born, classically trained and jazz-reared keyboardist, now 67, first came to the prog world’s attention with Refugee, formed with ex-Nice men, Lee Jackson and Brian Davison. Yet it was when Moraz briefly replaced Rick Wakeman in Yes for the Relayer album and world tour that he reached new heights. His work on Yes’ The Gates Of Delirium remains a masterclass in blending savagery and serenity.

That was a long time ago, though, and Moraz has done plenty since. He toured and recorded with The Moody Blues from 1978 to ’92 (he could probably tell you the exact dates) and he’s released diverse solo projects, including many piano showcases, some of which were hugely popular on Swiss TV. But those years ending in ‘five’ seem special to him.

“In ’85 I did an album [Flags] with Bill Bruford, and The Other Side Of Life with the Moodies. In ’95, I was one of the first artists to take live bookings over the internet, on the CHAT [Coming Home America Tour] tour, playing piano anywhere, from people’s homes to small venues… Boy, I should’ve trademarked that name. Oh, and 1965 was when I first arrived in New York from Switzerland. It was the first day of the first Great North-East Blackout, on the ninth of November, which of course in European stylings would be 9/11… So, there are all these matters of time, the subconscious, the sublime…”

Having been based for many years in Geneva, Moraz now lives in Florida – “It’s raining,” he laughs, “which is very welcome” – and he’s an extraordinarily upbeat, fluid talker. “I play keyboards every day, and it’s absolutely my joy. And I hope this new album shows I’m still interested in the sounds and frequencies of the universe.”

He’s more than happy to narrate his past adventures and achievements, but we’re also here to discuss his first new album in six years, MAP. Moraz is eager to emphasise that he’s always busy, and hasn’t been idle since 2009’s Change Of Space. The boundless energy resonating off him is such that you wouldn’t doubt it.

I’m always interested in extraterrestriality and what’s happening in the universe.

MAP is a collaboration between Moraz and drummer Greg Alban: hence the acronym for the Moraz Alban Project. “It’s not a solo album or a concept album. Some time ago, Greg called me and suggested I come up with some music we could play together. He’s a very active musician who’s always perfected his art. Very steady, but great technique: more economical than other drummers I’ve been fortunate enough to play with, like Bill [Bruford], Alan White, Andy Newmark [on The Story Of I]. We didn’t want anything too complex or difficult to digest. I composed 14 numbers very quickly in Florida, then Greg and I chose these nine and co-produced in California. The titles are all mine – they came naturally to these instrumentals and didn’t change from day one.”

One third of the tracks have “alien” or “aliens” in the title, which suggests an obsession. “I’m always interested in extraterrestriality and what’s happening in the universe,” Moraz reveals.

MAP is polished and slick, with entertaining flourishes. There are times when it will remind you of TV or movie themes, as it ranges from The Real Feel’s grand sweep to the smooth’n’mellow porn-film sax of Canyon Afternoon to the rumbling unpredictability of Mumbai-Mantra.

“Mumbai-Mantra came quickly at first but then evolved. It’s a loop in 11 bars, but the flute sound comes in on different bars each time so it never feels like it’s a loop. It took on aspects of a mantra, and having visited India in the 60s and 70s, I recalled the feverish activity on the streets there.

“We went to Matt Malley’s studio for this,” he adds, “and it has a vibe like a mini-ashram. His wife is Indian and he plays with Indian musicians all the time now, so I nudged him away from the bass in the direction of the slide guitar.”

Moraz has also been nudged a long way from his beginnings. “MAP, like all my music, is an amalgam of influences and experiences. When I was 13 in Switzerland, I was playing classical and jazz. My dad always wanted me to excel in classical music. So I’d played violin from age three or four. But I saw this big band at the restaurant-bar complex dad managed, and the conductor took me under his wing, taught me how to play the blues. Dad said: ‘There’ll be no rock’n’roll in this house!’ Of course, the more it was banned, the more I wanted to do it.

“So I was prepping for a piano competition – Chopin, Schubert – when I broke my right arm skiing. Just as that was healing, I broke two fingers on my right hand. The teachers said: ‘You’ll never be able to play classical again.’ So I had to turn a negative into a positive. I trained my left hand and over the next six months became kind of ambidextrous, and I embraced any kind of music the world offered. I fell in love with British rock. At 16, as an exchange student, I was sent to Germany and I met Louis Armstrong and Duke Ellington and I saw The Beatles in Hamburg. That was an illumination…”

Still redrawing the map of keyboard wizardry, Patrick Moraz and his marvellous memory are lighting up again.

MAP is out now. See www.themap.website.