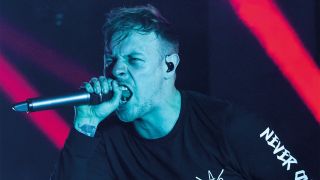 After 2014’s incredible Lost Together//Lost Forever put the Brighton heavyweights back on top of the UK metal foodchain, the imminent arrival of a new Architects album has filled our crusty blackened hearts with glee. We got vocalist Sam Carter and guitarist Tom Searle to give us their blow-by-blow account of All Our Gods Have Abandoned Us. Get stoked.

Tom: “We just want the opening track to be as aggressive as possible.”

Sam: “Yeah, it’s like a punch in the face. It’s nasty. Even our old fans will be shocked at how heavy it is. It is a song full of anger, it’s quite negative. There’s lot of bitterness at how the world works on this record, which I’m sure will become apparent.”

Tom: “This is a traditional Architects track.”

Sam: “The title refers to humans and what our society is doing. I mean, we /do/ have a deathwish! I think we’re too far gone now to rectify the damage we’ve done to the planet. ”

Sam: “I’d say the first riff that kicks in on this is one of the biggest riffs we’ve ever had.”

Tom: “There’s lots of riffs! I’ve never counted myself as much of a ‘riffsman’, so I’m cultivating a lot of confidence now. Don’t worry, they’re coming! This song’s got a bit of a Deftones-meets-Meshuggah vibe to it. It’s a really different vibe, I don’t think we’ve ever done a song that’s quite like that before.

Tom: “This is a song that’s built for huge venues. I can’t imagine playing it in a small club, and I think it might have the best riff I’ve ever written.”

Sam: “It’s like Boiler by Limp Bizkit, that riff. Thematically, I think we’re in a pretty dark time in the world right now, and this is just trying to address that. There is a tendency in people to not want to acknowledge the dark spot we’re in – people seem to care more about what Kim Kardashian had for breakfast than they do about climate change.”

GONE WITH THE WIND

Sam: “This is a song I was excited to hear before we had even got in the studio, because we worked so hard on it, and getting it right.”

Tom: “We are a metal band and we are happy with that, but we are a band that likes to experiment with our sounds as well, and this is one of those occasions where we really tried to do something that we have never done before and it payed off. It’s added another branch to what we do. It’s a very introspective song, but it’s still positive.”

Tom: “This, again, was us trying to do something different. It’s a bit more traditionally structured than what we usually do and would probably be considered one of the ‘softer’ songs. It might have been put forward as a single, but we don’t want to just put the more accessible thing out as the single – we wanted to go with what we thought was the best representation.”

A MATCH MADE IN HEAVEN

Tom: “When we were recording it I said I wanted it to win a Grammy, and that it was the best metal song ever written. I know in the past people have said, ‘You’re so down on your band!’ Well… not anymore!”

Tom; “I almost underrate this song. Every time I hear it back I think, ‘That’s tune!’ and we were mindful of not frontloading the album with all of our favourite songs.”

Sam: “There’s a recurring theme: we need to come together more and show love and compassion before it’s too late. You know, there is empathy on this album… it’s just filtered through intense anger.”

ALL LOVE IS LOST

Tom: “Quite neggy on the title! It was a bit of an experiment, and we thought ‘If we don’t pull it off we can do it as a b-side’. Once we finished we knew it had to be on the album.”

Sam: “I love how dark this song is. It’s got quite an industrial feel to it. It’s a wildcard for us.”

Sam: “This is us reminding people that we used to have a lot more love on the planet. I think the human ego is killing that and taking over. People need to remember what is important about their lives instead of feeding their ego.”

Sam: “The journey that is Momento Mori!”

Tom: It’s a really important song in the career of our band. Not just the themes or the length or the music, but just for us to be able to go, ‘Can we do this? Can we do an eight-minute song and not bore people? And it didn’t drag! I want people to be touched by it and the length adds to its power. There’s French horns and this industrial vibe, it’s completely new to us. We want to sound like Nine Inch Nails… if we actually liked Nine Inch Nails.”

All Our Gods Have Abandoned Us is out May 27, via Epitaph Records. Architects play Download festival on Saturday 11 June.