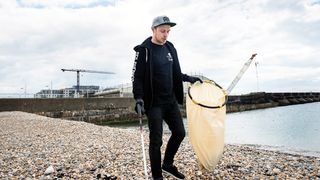 The beach down by Brighton Marina looks pristine. White, grey and brown stones nestle against each other, worn smooth by the rhythm of the tide, stretching all the way down to pale blue waters where sailing boats skim the horizon. Architects frontman Sam Carter flips a pebble with his foot and discovers a congealed white lump that looks like misshapen dirty soap.

“This is palm oil,” he tells us, screwing up his face in disgust. “It’s from the Amazon, and I guess it’s a cheaper version of oil, but they’re basically wiping out orangutans’ homes. It’s washed up all over Brighton’s seafront. There’s been loads of warnings because it’s really poisonous to dogs, and it can kill them.’”

We’re at a beach clean-up organised by marine wildlife protection organisation Sea Shepherd, and as Sam carries on turning rocks, 50 or so volunteers do the same around him, uncovering numerous globs of the grease, plus vast amounts of bottle caps, corks, plastic and other miscellaneous items you would never realise lurked beneath. The frontman has been an ambassador for the group for the last two years, and this is his seventh clean-up.

“There are so many little bits of litter,” he observes ruefully. “It really surprises me, because this is Brighton, and I feel like everyone’s so proud of it. No one fucking thinks.”

It is precisely because Sam does think, because he makes a conscious effort to be aware of his surroundings, that he’s at this beach today. Architects’ last album, 2014’s Lost Forever // Lost Together, was a scathing attack on the destruction humans are causing to our world through religious extremism and environmental thoughtlessness. On tour, they had a table of Sea Shepherd literature at each show. But if that record was a warning shot to humanity, new album All Our Gods Have Abandoned Us is its more extreme and damning sequel.

On the song Deathwish, Sam sings of how our actions – or our inaction – when it comes to the planet equates to ‘suicide in slow motion’, while The Empty Hour Glass paints a picture of time as a meaningless continuum where every moment is dead. They’re heavy words, set against a raging, screaming soundtrack that leaves you in no doubt of how the quintet feel about today’s society, and their desire to shock people into acknowledging our problems. But the Brighton metallers weren’t always this politicised, and the roots of their strident new direction can be traced back to 2012’s Daybreaker, their first record to contain socially aware lyrics. Back then, a 23-year-old Sam Carter was more concerned with writing songs about girls than global warming, and could usually be found down the pub. While he was away from the studio, the rest of his bandmates watched a documentary called Forks Over Knives, which explores the idea that people can lower their risk of cancer and other diseases by switching from an animal-based diet to a plant-based one. They immediately decided to give up meat.

“I’d gone home and come back and the whole band was vegetarian,” remembers Sam, with a degree of bewilderment in his voice. “I was like, ‘OK, if you think it’s important, I’ll watch this film.’ So I watched it, and became vegetarian as well.” Together, they saw Earthlings, whose graphic scenes of global animal agriculture, including cows chained to stalls for milking and newborn calves getting separated from their mothers, have a reputation for shocking people into changing their diet. Now Sam felt he had no choice but to give up dairy products, too.

“We were all becoming more aware of corruption,” he says. “You see these big meat organisations that have so much money invested in the government that you want to rebel against that. I always say that whenever you go to a restaurant and buy a vegetarian meal or a vegan meal, you’re voting with what you eat. I don’t want to be part of this shit – you don’t have to eat meat to survive, you don’t have to eat fish or dairy.”

Sam’s lifestyle changes, and the evangelistic attitude that accompanied them, came as a surprise to those close to him.“I’d gone into the studio like a fucking party boy and came back like, ‘Yeah, we’ve got a new album now and I’m vegan and I don’t smoke,’” he recalls. “My friends were a bit shocked and it took them a while to adjust. My parents thought I was a freak. Every time I’d see them, I’d be like, ‘Why don’t you change your diet?’ “At the start, when you get excited about something, you want everyone to do it. Some people might have thought we were trying to ram it down people’s throats or preach. I pissed off a lot of friends. It’s not like I think I’m better than people, I just don’t want anything to die. If something’s not going to die, and it’s going to keep my friends and family healthier, why wouldn’t you want to tell people about it?”

Just two months after these epiphanies, the band were on a flight to Australia to support The Amity Affliction when Sam watched a documentary called Sharkwater, featuring Sea Shepherd founder Paul Watson confronting shark poachers in Guatemala. Coincidentally, the organisation had a table at the gig in Brisbane the next day. Sam bought a shirt, which he started regularly wearing onstage, eventually leading to his work as an ambassador.

“At the start, I was a little embarrassed, because I didn’t feel I’d done enough to warrant that name,” he admits. “But it’s so easy to have the crowd’s attention in the middle of a song. While we were on tour, they were in the Faroe Islands, so every day I’d go onstage and say, ‘Did you know that today this many whales died? And you’re not talking about it and magazines aren’t talking about it, but I have friends there being arrested for it.’”

Not everyone is so supportive towards Sea Shepherd, though. Paul Watson was part of Greenpeace in the 1970s, and the two have a long history of disagreements about how best to protect ocean life. Sea Shepherd favour interventionist tactics such as blocking whalers and have even rammed ships, which Greenpeace condemns as aggressive. Yet it’s this direct action that appeals to Sam.

“I’m into the hands-on approach,” he says, “actually going out and doing it and getting in the way. I love the fact that someone cared so much about an animal’s life that they would put it before theirs. It was such an amazing thing that I wanted to tell the world and anyone who would listen about Sea Shepherd.”

While Sam’s keen on saving ocean life, he’s not so sure about humanity. When Architects – completed by guitarists Tom Searle and Adam Christianson, bassist Ali Dean and drummer Dan Searle – revisited Sweden’s Studio Fredman last October to record All Our Gods Have Abandoned Us, they realised that in the two years that had passed since the last record, nothing had changed; no one had done anything about issues like climate change. So they invented a game: if you could press a button that would wipe out every single trace of the human race, and Mother Nature would take over, and the planet would reset to normal, would you do it?

“All of us said yes,” he reveals. “And then we would have people come in the studio and we would ask them, and they’d be like, ‘You’re all fucking mental.’ And we’d be like, ‘Why? Why are we crazy?’ We were just a bit fed up of how selfish everyone is. I’ve said it a few times, but people literally give a shit about what Kim Kardashian has for lunch, and breakfast, but no one gives a fuck about real shit.”

Tom wrote a set of bleak lyrics, and Sam obsessively worked on his vocal delivery until he was happy his performance was perfect. Towards the end, he suffered from stress headaches and had to get a deep tissue massage in his back to relieve the tension.

“It’s fine,” he says, “it’s just what happens when you shout for five weeks, but I wanted to give it a real, pissed-off performance. You can’t sing about the end of the world if you’re like, ‘Oh, the end of the world’s coming.’ You’ve got to be like, ‘It’s the fucking end of the world man! What are we doing?’” This process also took a toll psychologically. Sam has previously spoken about having counselling, and went back into it after work on the album was finished.

“I think when you’re tackling subjects like that and thinking about them all the time, whether or not you know it, when you’re saying it again and again and again, you’re constantly jamming it into your mind. So I felt heavy afterwards, and really mortal. I was very aware of life and death.”

On the surface, these sound like dark times for the singer, but happily he’s in a much better place now. After talking through his feelings and nearing the end of a three-month break – the longest Architects have ever taken – his head is clearer. He’s just moved into a new flat with his girlfriend of three years – a vegan chef – and their new rescue dog. And standing in front of a huge pile of bags filled with rubbish collected from the beach today, there is some hope that all is not lost for the human race. Sam is standing up for his beliefs every day, and he’d be willing to risk his life for them if the band broke up.

“I’m just waiting for the day when I can go out on a boat and fucking stand there with everyone else,” he declares. “That’s what I want do. Any time anyone’s like, ‘What are you going to do when the band’s over?’ It’s like, ‘I’m gonna go and do that stuff, because all I’ve ever wanted to do is make a difference.’” So if Architects were to end tomorrow, Sam would be out there?

“I’d be gone,” he says firmly, fixing our gaze with the zeal of a man with a mission, ready to take on the world.

ALL OUR GODS HAVE ABANDONED US IS OUT MAY 27 VIA EPITAPH. VISIT WWW.SEASHEPHERDUK.ORG