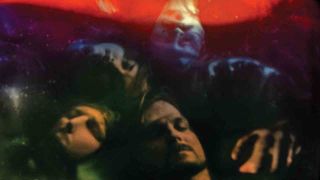 “I like to think of our music as a painting. But a painting where there’s a hand coming from it and starting to choke you.”

Toni ‘Ontto’ Hietamäki, bassist and lyricist for Oranssi Pazuzu (the band name referring to the demon from The Exorcist, but orange), is offering his own interpretation of the mental, often nightmarish lurch that’s likely to occur every time you cross his band’s musical threshold. Formed in the creatively fertile city of Tampere, Finland – home to a closely knit cabal of Hexvessel, Grave Pleasures, Dark Buddha Rising and Vesperith, to name a few – Oranssi Pazuzu have set about mining black metal for its most psychedelic properties, over the course of the past 13 years, honing their art until they’ve become one of the trippiest and most transformative experiences the underground has yet produced.

Initially operating under the radar, undistracted by the weight of expectation the music scene tends to place on bands from the off, Oranssi Pazuzu’s reputation for mind-warping adventurism has grown steadily to the point where it’s now reaching critical mass. Their hermetic yet vastly expansive mission to interrogate the unknown and the outer regions of human consciousness has, as with Sólstafir, or rather more rapidly, Heilung, spread through the kind of holy-fuck-have-you-heard-this?, word-of-mouth process reserved for bands so keyed in to a resonant, altered state that you feel like you’ve arrived on an alien planet, sending out a signal for other, likeminded inhabitants.

Having recently moved from the native Svart label to metal behemoths Nuclear Blast, their fifth studio album, Mestarin Kynsi (‘The Master’s Claw’), is a perfect entry point to the rationality-defying nature of the Oranssi universe, and is likely to ratchet up the quintet’s momentum even further. Not that this is their primary concern.

“We’ve never been good at thinking about what target group this music appeals to,” says vocalist and co-founder, Juho ‘Jun-His’ Vanhanen, joining Ontto in the safe social distancing of a three-way Skype chat. “The whole existence of this band has only been about us making music and exploring what we can do musically, and then people will take what they want from that. Of course, we want our music to be heard by as many people as possible, but we are always taking it step by step, wherever it leads, and signing to Nuclear Blast doesn’t really affect how we approach the music. For this band that’s the only way to exist, not to deal with any expectations, because we never had any when we started this band, and that’s a good way to continue.”

For a band who have taken so many liberties with black metal, fracking it with motorik krautrock grooves and analogue synth sounds that bring to mind hallucinatory 70s sci-fi movies Dark Star and Solaris, it’s unsurprising that Oranssi Pazuzu’s roots don’t actually lie in that scene. Instead, their origins lie in free-wheeling avant-rock, in the form of the band’s obscure precursor, Kuolleet Intiaanit.

“Every member of Oranssi played in that band at some point,” says Jun-His. “It was more freaky and not so heavily atmospheric, but it was the foundation of this band in many ways. When Kuolleet Intiaanit broke up, we were already looking to take it in a more sinister direction, and also to increase the hypnotic element. We brought in the black metal aspect for the harmonic and the sinister side, and we were drawn to the rawness too. You can hear that, and the atmosphere, in some Burzum albums for example, but we also wanted to have tribal, hypnotic beats. We wanted to create a soundscape around where you have a lot of layers that build up and take you over.”

Although Oranssi’s first two albums, 2009’s Muukalainen Puhuu and 2011’s Kosmonument, set out the band’s stall, thematically and sonically bound to the cold reaches of outer space, they started registering properly on the black metal scene and beyond with the release of the more spacious and dynamically assured Valonielu in 2013. Their presence was amplified even further by a series of consciousness-altering, drop-kick-you-through-the-Stargate gigs at festivals such as Roadburn, Inferno and the UK’s Incineration, leaving punters stumbling out of venues trying to register and explain what, definitely not on God’s green earth, they’d just witnessed.

“Valonielu was the album where we really found the angle we were looking for,” affirms Ontto. “When we were making it, it felt like something had changed within the band. There was a sense of freedom, and of going to an unknown place.”

The 2016 follow-up, Värähtelijä, redirected the band’s lyrical concerns from outer to inner space, the traction force of its four-dimensionally tumbling grooves pulling you into even more bewildering expanses and achieving even greater acclaim. But it’s the release of Mestarin Kynsi that truly suggests Oranssi Pazuzu’s time is now.

Loosely taking up the futuristic concept of a megalomaniac leader taking over the populace through mind-control – an experience paralleled by the towering and psychedelically transfixing nature of the album itself – its “dystopian fever dream” is simultaneously an assured distillation of the band’s sound and an even wilder ride than any of us has yet undergone. But more importantly, the compelling aura of dread, of being subjected to obscure yet irresistible forces, the passage through de-familiarised surroundings and the sense of escalation towards a state of no-return physical and psychic transfiguration all speak to our current, global predicament, on the most primordial of levels.

Ask Ontto and Jun-His if they’re struck by the parallels between Mestarin Kynsi and what it feels like to be living through the COVID-19 pandemic, and they’ll both agree that it’s a notion they are still struggling with.

“It’s difficult to say,” admits Jun- His, “because we started working on this long before the virus broke. But we’ve talked amongst ourselves about how some aspects of the album feel similar to the state that we’re in right now. We’ve always seen our music as like taking a trip, and you can think of this pandemic as similar to experiences you don’t want to have when you are on certain substances; you have that fear, like, is this really real? Are the borders closing? Are walls just rising from the ground?”

“I think the new album is definitely comparable to living in this moment,” says Ontto, “and it freaks me out a bit that things are so close to the edge, and this is a very close-to-the-edge kind of album. The lyrics don’t address anything directly, they’re more like visions, or like a movie that’s repeating constantly in your head. But the last song, Taivaan Portti, translates to ‘Heaven’s Gate’ and in it, everybody goes through the gate and sees only the final endless light. There is something pretty apocalyptic about this album, and then when something like this happens, then it is almost too much of its time.”

It’s clear from talking to Jun-His and Ontto that the two are closely bound, on a personal and a creative level. They each pass questions to the other after they’ve answered, and talk about the musical universe they’ve engendered like particularly progressive parents discussing, if not the child itself, then the diligent yet wondrous art of upbringing.

In the same way as Meshuggah may not be intrinsically emotional, but sound like a breeding ground for alien properties that create an overwhelmingly emotional reaction, so the cosmic and psycho-reactive nature of Oranssi Pazuzu allows you to navigate your own rites of passage and moments of personal reckoning. Not all of which might be entirely comfortable.

“I think even a bad trip can create a really good learning experience,” says Jun-His, “and we try to manifest that with the music. It’s escapism in a way, but it’s escaping yourself, where you have the opportunity to observe your thought patterns as an outsider, to look at them without your ego so you can see the wider picture.”

“For me, it’s about processing things,” adds Ontto. “A lot of this band is expressing the human experience, and some of it is fucking dark. I’m just trying to maintain my psychic state and not get too paranoid. Music helps me do that. If I don’t pour those feelings into the music, then they start to pile up in my head and I know it becomes a bit messy after that.”

“I have the same feeling,” says Jun-His. “I need to express the darker cycles in my head, existential fears where you’re just being overwhelmed by your own thoughts, your own ideas of what this existence really is. But it’s really important for me to bring these to an abstract level to deal with them, and music is really good for that. It’s a really cool way to channel your feelings and emotions, because it leaves a lot of room for interpretation. There is darkness, but there is freedom too.”