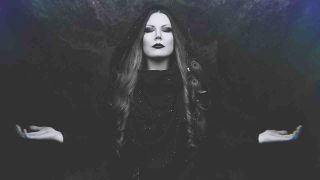 For most of us, that moment of stark, night sky-induced elemental wonder is an occasional experience, a glimpse of the infinite looming beyond the hustle and bustle of our everyday lives. For Sariina Tani, articulating that intimate yet boundless connection between inner and outer space has been a lifetime’s work – one that’s finally come to fruition with her debut album under the guise of Vesperith.

“I can’t say Vesperith is the result of any particular epiphany,” says Sariina of her spiritual path to this point. “It’s a feeling that’s been gradually growing since I was a child. I’ve always liked to question things, I’ve always been inquisitive and I’ve always liked to explore and experiment. I’ve always had this feeling that there’s a wonder to our planet and the space that we live in, and I’ve always been fascinated with how people interact with that wonder. Right now. I feel that our people have become disconnected from the beautiful things in our world. It’s a really big problem that we are facing right now, and it’s a mindset that we need to change. I’ve always had that fascination and that wondrous mindset towards everything that I really wanted to explore with this album.”

Recorded at her home in Tampere, Finland, the small, southern city that’s given rise to the equally cosmically minded trio of Orannssi Pazuzu, Hexvessel and Dark Buddha Rising, Vesperith is a rapt, transformative experience. Immersed in a state of near-tantric, psychic suspension, it’s subject to gusts of sense-shearing black metal, morphing between divine bedazzlement and visceral deliverance, as if Carl Sagan had directed the Angel Of Death scene in Raiders Of The Lost Ark.

“I don’t want to rely on genres,” Sariina says. “I think of music more as resonances. I think of the blastbeats, noise and that harsher sound as the chaos in the mix of the cosmos. My clean vocals and the harmonies I use are the other part of that equation, so my goal in my music is to create a whole universe where chaos and order and harmony are in balance. I want the music to be free from genre, and I want to use everything that’s in my power without it being labelled, because it narrows it down how music can be experienced or expressed. I really love that black metal harshness and the cruelty of those really demanding riffs and noise, but I would never be able to listen only to that. I need a broader view and I need to use more colours in my palette.”

As singular an experience as Vesperith is, both black metal and dark ambient have often tuned into the vast reaches of the cosmos as a means to channel an unquantifiable yet primordial essence. For many, the purpose is to realise the insignificance of humanity against an unfathomable backdrop. For Sariina, however, her attraction to the beyond has a very different intent.

“I’ve never thought that human beings are insignificant. People are spreading ideas like ‘Humans are parasites!’, and how we’re destroying the planet. Of course, I agree that we are destructive, and there’s a really fundamental mindset that we have to change right now, but we really are part of a large, beautiful, cosmic order. There’s disorder, chaos and then there’s order. It’s a balance, and we have to find that balance once more. People are lacking that confidence in our own abilities to really create something beautiful and create something empowering and – I know this sounds a little bit hippyish – being in tune with the cosmos, the balance of the world and its natural cycles. So this album isn’t about losing yourself to a greater whole. It’s wanting become more a part of it.”

At the heart of Vesperith, and with a stunning, retina-overloading video to accompany it, is the 10-and-half-minute track, Quintessence, drawing from the freeform breakdown at the end of the previous track, Valohämärä, and weaving the most sublime of rites from the chaos. Sariina’s frictionless, floating vocals pass though states of calm and turbulence, into a searing journey to the cusp of what your senses can accommodate, and to cleansed realms beyond.

“It is the crux of the album,” says Sariina, “and it has a really large metaphysical and esoteric meaning for me. It’s really multi-layered, because it is about release and metamorphosis, about and death and rebirth. It’s about finding your wings, so to speak, and also about abandonment in that sense, that you are ready to go into that metaphysical abyss and really commit to a new beginning. I wanted the music video to express that as well: that we are part of a greater cycle, and then there are smaller, personal and physical cycles that we have all around us and within us, and that the scale of these cycles is infinite. It’s also been the one song that I’ve been doing in tears, because it expressed the catharsis of the whole journey. This has not just been an album to me; it’s my life, and I’ve really lived through this album, so this was the cathartic song where you really go from the darkness into the light. When you find out that when everything is at its darkest, that’s when you really find out how much beauty is all around you, and how everything really expands in new ways when you have removed your barriers.”