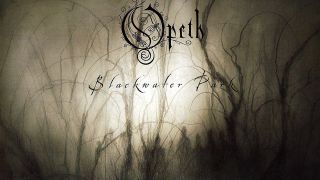 Thinking man’s metal. God, what a tag to give any band – almost the kiss of death. Imagine being lumbered with the claim that you actually rely on that spongy stuff between your ears rather than what’s going on further down. After all, this is supposed to be about sex, drugs and rock’n’roll, right?

But, just occasionally, there is a band who break through, and revel in being thought slightly more intelligent than their peers. It didn’t do Queensrÿche any harm in the 1980s, and now Sweden’s Opeth appear to be succeeding with same kind of intentions..

“I fucking hate that phrase, ‘thinking man’s metal’,” admits Opeth frontman Mikael Åkerfeldt. “It makes us sound superior. We’re more intelligent than any other metal band. Whoever came up with that term might have thought they were doing us a favour, but it actually could have done us some harm, and put people off. So let’s just forget about it!”

In a typically understated Swedish way, Åkerfeldt doesn’t see Blackwater Park, the band’s fifth album, as being a particularly significant record in any musical sense. While so many believe it allowed Opeth to take a quantum leap forward, the vocalist has other views.

“We started out in 1990 as just another melodic Swedish metal band, inspired by Iron Maiden. That’s certainly the way we sounded on our debut album [1995’s Orchid]. But then we threw everything out, and began all over again in a musical sense. You can definitely hear the change in approach on the second record [Morningrise, released in 1996]. By then, the progressive and psychedelic influences that we are so known for these days had come into their own, and our songs were a lot longer. I’d say that only Edge Of Sanity and maybe Katatonia were doing anything similar in Sweden.

“The problem we had was a business one. In the first decade, we released four albums, but only did one tour – I mean, one tour in 10 years! We knew there were loads of people who’d love what we did, if only they got the chance to hear it, so the frustration was that the label we were on didn’t seem able to get us out there. But with Blackwater Park that changed because we signed to Music For Nations in Britain, and that definitely made the difference.

“Musically, though, I don’t think we altered at all with this album. It may seem that way, because we got so much more attention, but if you listen to the album before BP [1999’s Still Life], it’s in the same style.”

Yet, for Opeth there was one radical shift on the record: for the first time they worked with an outside producer, having overseen all their previous records themselves. And the choice seemed odd: Steven Wilson, mainman with British prog-metal band Porcupine Tree.

“I had been a fan since I heard their 1995 album The Sky Moves Sideways,” enthuses Åkerfeldt, warming to those memories. “And it was almost an accident that got us together. By the time Still Life came out, I’d finally got on the internet. And, to my surprise, one of the first emails I received was from Steven, telling me how much he loved what we did! Anyway, I flew over to England with my girlfriend just to meet him, we went out for a meal, and it ended with me asking him if he’d like to produce us. He seemed as keen on it as I was.

“It wasn’t hard to persuade the rest of the band. Peter [Lindgren, guitar] was also a big fan; he and I made all those sort of musical decisions in Opeth, so the Martins [Lopez on drums and Mendez on bass] really weren’t consulted. At that time they’d only been with us four years, and were happy to go along with whatever the two of us decided.”

However, there was one man slightly put out by the Steven Wilson decision.

“We’d collaborated on both Still Life and My Arms Your Hearse [released in 1998] with a Swedish engineer called Fredrik Nordstrom. He was well known on the metal scene, had produced a number of bands as well, and had his own studio in Gothenburg [Studio Fredman]. I suppose he always thought that if we ever brought in an outside producer then he’d be the first choice. But unfortunately he wasn’t.

“When we told Fredrik about Steven he was a little hurt. Not angry – that was never his way – but clearly upset. Fortunately, once he and Steven met up they got on so well that there was never a problem in the studio. They understood each other, and it was a great partnership. In the end, we allowed Fredrik to mix the album on his own – we all trusted him – and he did a fantastic job.”

“I would guess that Steven is very much a dictator when it comes to his own music, but he’d already had enough experience working on other people’s stuff to realise that he had to take a different role. Working with him was a pleasure. He came up with so many interesting angles on the way to record, and it was the little things he did that made the biggest impact.

“I know that a lot of fans were worried when they found out we weren’t working with a metal producer. But he didn’t alter our sound, he enhanced it. There would have been no point in us using the same sort of name as everyone else in the metal world. We wanted to take the risk, because that’s the way you get the best out of the songs.”

If you take a look at the credits for Blackwater Park, you’ll find mention of the fact that it was ‘painfully conceived’. But this was far from being the truth. In fact, the whole process seemed rather smooth. Åkerfeldt smirks now at that particular claim, one that was put in because…

“It looked kinda cool to say that. People always like to feel that artists struggle to get their music out, don’t they? If we’d have put that the record had been ‘easily conceived’, it might have seemed a little arrogant – and I suppose we were also looking for some sympathy!

“The truth is that no record is ever easy to make. There’s always a certain amount of pressure and stress. But, while we had an absolute nightmare whe we did the two albums Damnation and Deliverance simultaneously in 2003, we spent about six weeks on Blackwater Park, and things slotted into place.”

But, like so many others, Opeth were still writing songs when they started the recording process. It was a lot like tying their shoelaces while they were walking down the road.

“It sure was! I think four songs were virtually ready to go – Bleak, Blackwater Park,Harvest and The Leper Affinity – but even they changed in the studio. The rest were done as we went along, really working hard and working creatively. And I also remember that the whole band had just three rehearsals working on the new material prior to us moving to Gothenburg. So, there was a certain degree of chaos, but it’s all comparative.”

The band and Wilson (pictured above with Akerfeldt) spent two weeks living in a small room within Studio Fredman [“four beds in a room, it was very cramped”], followed by a brief stint on a boat, and then they rented a flat owned by Mikael Stannes from Dark Tranquillity, who was away on tour at the time.

“It may have seemed cramped, but it meant the only thing on our minds was the music,” says the singer. “Nothing distracted us, and we bonded with the songs. That was so important. Being so far from home [the band were based in Stockholm] took away the distractions.”

Blackwater Park was released in March 2001, to an almost immediate tornado of acclaim, both critical and popular.

“It was so fucking great to finally be involved with a label who were getting the music into the shops and to a wider cross section of people. We were getting attention from parts of the media who didn’t know we even existed before, and at last we got to go on proper tours, playing everywhere. It was a crucial time for us. I suppose if you look at it from the outside, then I can understand why there is this feeling that Blackwater Park changed so much for us.”

The album still retains a certain cachet and charisma, introducing clean vocals to a genre so dominated by the obsession with growling and snarling. Moreover, it started a sub-conscious osmotic process, allowing different musical elements to creep into metal.

“There are a lot of fans who won’t listen to anything unless it is pure metal. I happen to think that that’s really narrow- minded. But what I hope we achieved with Blackwater Park was to open up people’s appreciation for music. For me, working with someone like Steven Wilson delivered a new attitude to the way I wrote and recorded, and I also found myself more aware of what was possible in a musical sense. And I like to think that there’s a lot of fans who were inspired by us into checking out other types of music. That’s actually very important to me. I don’t want to preach, but I believe that if you are confined to one type of music, then you are missing out on so many worlds and colours. You are depriving yourself of some great experiences, and if there is a message in Blackwater Park, then that’s what it is.”

One of the crucial reasons why that record has become such a landmark, is that it’s a multi-dimensional listen. A cursory spin reveals so little. It takes effort to maximise the impact.

“You know, I come across people all the time who tell me that they are still hearing little things for the first time on the record. It’s got so much going on in the production and mix – mostly almost subliminal – that you can never say you’ve heard it all. Perhaps that’s the secret, the constant excitement of discovery. And a lot of the credit for that goes to Steven.”

In an era when so many bands are now performing classic albums in their entirety, might Opeth consider doing something similar, by taking fans for a stroll through the length and breadth of the Park?

“We’ve never thought about doing anything like that… wow, what an idea! We have, over the years, done all but one song from the album live – the instrumental Dirge For November is probably a bit too weird to do onstage – but to actually do the whole album in sequence… that could be such a challenge. But then, maybe this is a record best left for people to discover in their own individual ways. By doing it live we could undermine the mystique, which is the one thing that makes it so special.”