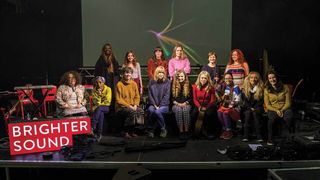 Both Sides Now\u2019s launch event took place in Manchester in November, and featured one of its ambassadors, Beth Orton (front row, fourth from left)

With PRS For Music reporting only 16% female membership of songwriters, and the UK Music Diversity Survey disclosing women hold only 30% of senior executive roles in the UK music industry, a number of initiatives have formed in recent years to help women succeed as musicians and industry professionals. One is the PRS Foundation’s Women Make Music campaign, encouraging funding applications from women, increasing the profile of UK female musicians and breaking down industry stereotypes and barriers.

“Through WMM, artists, bands and composers can apply for up to £5,000 to support the creation, performance and promotion of music and take the next step in their career,” says CEO Vanessa Reed. “After five years of WMM, we shared the experience with partners in Europe so more female artists could collaborate. This pioneering programme is called Keychange. Our aim is to empower women to transform the future of the music industry, and to encourage festivals to achieve a 50:50 gender balance across their programmes by 2022.”

The PRS Foundation work with some familiar names. “We’re very proud to have supported the release of Employed To Serve’s The Warmth Of A Dying Sun through our Momentum Music Fund,” says Vanessa. “We also supported Doe and Muncie Girls to attend SXSW last year. We fund a lot of rock/alternative, and encourage applications.”

They also work with Festival Republic – the organisation behind Reading and Leeds festivals, among others. “We’re proud to be helping Festival Republic with their ReBalance programme, set up by organiser Melvin Benn, who’s setting a great example of how men can also lead gender equality programmes,” says Vanessa. “The three-year programme will provide a week’s studio recording time to a female band, musician or solo artist each month. As well as the studio and engineer, they’ll get accommodation and travel. Successful acts will also be given a slot at a Festival Republic or Live Nation festival. PRS Foundation is supporting female producers to mentor the artists. Equality benefits everyone. Men and women need to be encouraging anyone who’s underrepresented in the industry.”

Meanwhile, the Brighter Sound charity recently launched Both Sides Now, a programme that aims to support, inspire and showcase Northern women in music. “Both Sides Now aims to bridge the gap in access, opportunity and career progression for women in music,” says Director Debra King. “Throughout the next three years, we’ll be working with artist ambassadors to support the creative development of young and emerging female musicians through residencies and commissions. We’ll also be providing work experience, apprenticeships and training in tech, production and other backstage roles.”

Debra echoes Vanessa’s sentiments about women in the music industry. “Female participation and representation is shockingly low. Both Sides Now aims to reframe perceptions, challenge stereotypes and encourage more women to pursue careers in the industry.”

Like the PRS Foundation, Both Sides Now encourages submissions from the metal world. “All our opportunities will be open to all genres and styles,” confirms Debra. “We encourage musicians from all backgrounds to get involved.”

For more about Both Sides Now, Women Make Music, Keychange and ReBalance on their official websites.

In the new issue of Metal Hammer, we investigate how you can get involved with the movements putting women in the spotlight. Buy it directly here or become a TeamRock+ member to read it right now.

The people making gigs a safer place for women