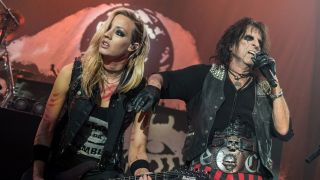 “You know, for me playing guitar was third time lucky,” says current Alice Cooper and former Iron Maidens guitarist Nita Strauss. “I had tried playing the drums, and was awful. Then I switched to bass, but that never really grabbed me. So, finally I turned to the guitar. I was 13 years old when I was inspired to try this. And you know who got me into it? Steve Vai. Seeing him in the movie Crossroads was a turning point. The scene at the end with the guitar duel just lit the screen up for me, and made me wanna play the guitar.

“The first song, though, I ever heard where the guitar got to me was Trust from Megadeth. I had never heard metal before, but I recall thinking when it came on, ‘What is this? How come nobody told me about metal before? I love it!’. Of course, it was only later I found out the guitarist was the great Marry Friedman.

“The thing is now, that when I listen to an album, all I hear are the guitars. People go on to me about how great a singer is on a particular album. But I have to admit I didn’t notice there was a singer – ha! All that matters to me is how the guitar sounds. Yes, I am a guitar freak!”

“This is full of what I would term essential guitar music. In fact, when you want to define what a great guitar album sounds like, then you have to talk about this. Vai made the guitar talk and sing here. You feel the guitar is expressing lyrics,. It really is amazing what he did. So many others have tried to emulate what Vai did, but nobody has come close.

“And Steve was so dedicated to his craft that it’s said he fasted for 10 days before recording the track For The Love Of God on this album. That’s how far he would go to get the emotion he wanted. I tried doing the fasting thing to improve my artistry, but it didn’t work anywhere close to the way it did for him!

“I have met Steve Vai, and he was just so nice to me. I told him how inspirational I found his music, and he was very gracious. What got me was that he knew who I was. That meant a lot.”

“Just to know that Jason Becker was 19 years old when he did this album is remarkable. He had done a couple of albums previously with Marty Friedman under the band name of Cacophony. But to be so young and yet have such a sophisticated approach is beyond my comprehension. Jason already had his own style in place, and knew who he was.

“The fact that he was struck down by such a terrible illness [amyotrophic lateral sclerosis] when still only 20 is incredibly sad. But I had the privilege of going to Jason’s house not so long ago, and got to play the track Perpetual Burn for him – that was inspiring. The way he’s dealt with his illness is amazing. I urge everyone to see the documentary Jason Becker: Not Dead Yet, which gives you an insight into what he went through. And when you listen to this album, made he was in his teens, you appreciate the world has been robbed of a unique talent.”

“This guy (who died in 2003) once had the reputation for being the fastest guitarist alive. He could play something like 19 notes a second. But what I love about this album is that you would never know how fast he was.

“There are so many guitarists who burn up the fretboard, but what I admire about Shawn Lane here is the melody and restraint he shows. He displays a great songwriting ability. But more than that, Lane took all the money he got to record the album and used this to learn how to play every instrument here, with very little outside help being brought in. This is truly a Shawn Lane solo album in every respect. I’ve taken inspiration from his example, and I’m doing the same thing as I demo my own solo album, although that is a long way from being finished. My approach, though, is all down to this guy.”

“Yes, the UFO guy. Most people know him because he is a member of that band. But what they are not aware of his body of solo albums. But when you listen to Meltdown, you discover a different side to the man. He is a fine writer, and comes up with great riffs as well. What you can tell from listening to this record is that Vinnie Moore feels everything he plays, and has the ability to make it mean something to you. That’s a special talent. All the tracks come across with as being delivered with the vibe of someone who is a genuine songwriter. As you can tell, I am a big fan of his.”

“I really wanted to include something more modern, because there’s always the temptation for people to believe that everything’s been done and played on guitar, so there’s no more to achieve. But that’s not true at all. Because just when you do start to wonder if there’s anything different to play on the guitar, along comes someone like Tosin Abasi of Animals As Leaders, and he turns everything on its head. It’s so cool to listen to what he does on this album, as it makes us realise there’s still so much more you can do with the guitar.

“His style and sound are very evolved, very textural and so rhythmic. Tosin is inventive and creative. He has come up with a fresh dimension on the guitar, and it’s great to know we are living in an era where you still can be floored by what a young musician can do.”

Alice Cooper to headline Stone Free at The O2