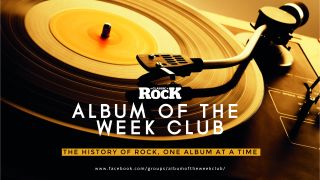 Every week, Classic Rock's Facebook group, the Album of the Week Club, listens to and discusses a classic album, votes on how good it is, and publishes our findings, with the aim of giving people reliable reviews and the wider rock community the chance to contribute.

If you’re on Facebook and want to discover classic rock music and discuss it with the mag team and other rock fans, join the Classic Rock Classic Rock Album of the Week Club. We listen together, comment together – and together we're building the definitive guide to the greatest ever rock albums: a series of reviews that mix personal stories with critical thought.

Every album is rated out of 10. Here, from high to low, are the albums we've reviewed so far.

AC/DC - Back In Black
As one of our reviewers says, "AC/DC may not have reinvented the wheel here, but they may have produced the best f**king wheel to ever exist". Score = 9.31

Van Halen - Van Halen
Van Halen's debut album changed the face of rock music when it was released in 1978, and, for better or worse, ushered in the era of the shredder. Score = 9.21

Boston - Boston
Boston's debut album was mostly recorded in band mainman Tom Scholz’s basement in Massachusetts, yet went on to shape the studio work of a generation. Score = 9.06

Pink Floyd - Animals
In the wake of Dark Side Of The Moon and Wish You Were Here, Animals saw Pink Floyd show their disgust with humanity. Score = 9.04

Led Zeppelin: Led Zeppelin III
In which Jimmy Page and Robert Plant retreat to the Welsh hills and come up with something less bombastic for Led Zeppelin's third album. Score = 8.98

Motorhead - Overkill
Lemmy thought it was too slow, but Motorhead's Overkill is clearly a fan favourite... as proved by our fan reviews. Score = 8.89

Jethro Tull - Aqualung
Jethro Tull's fourth album, Aqualung, is the biggest selling of the band's 50-year career. But is it a concept album? It's not, says Ian Anderson. Score = 8.66

Status Quo - Live!
Recorded at the height of their powers in front of a rabid Glasgow audience, Status Quo's Live! is a firm fan favourite. Score = 8.64

Rolling Stones - Beggars Banquet
The album that reinvented the Stones and kicked off the purple patch that had them crowned as 'The Greatest Rock'n'Roll Band in the World'. Score = 8.6

Rush - A Farewell To Kings
In which Rush head to Wales, where reader Ian Pritchard spots Geddy and Alex out sight-seeing, looking down the Brecon Valley toward Llangynidr. Score = 8.59

The Who - Tommy
Strictly speaking, Tommy wasn't the first rock opera. But it's the one that catapulted The Who into the major leagues. Score = 8.45

Alice Cooper - Welcome To My Nightmare
A devilish combination of shock-rock and Broadway pizzazz spawns a theatrical classic. Score = 8.44

Nazareth: Hair Of The Dog
An inspiration for Guns N' Roses and a cover featuring a bat-like creature with vicious teeth. It can only be Nazareth's Hair Of The Dog. Score = 8.26

Mike Oldfield - Tubular Bells
Tubular Bells' iconic status grows as the years pass, its importance underlined when Mike Oldfield performed it at the opening ceremony for the 2012 London Olympics. Score = 8.14

Scorpions - Lovedrive
Dovetailing perfectly with what AC/DC and Aerosmith were doing, the Scorpions added arena sparkle to their sound. Score = 8.10

Rush - Signals
An album that split Rush's following clean down the middle, Signals saw the Canadian trio beginning to experiment with keyboards. Score - 8.06

UFO - Lights Out
With just eight songs and slightly over half an hour of music, is UFO's sixth studio album the one where they got it just right? Score = 8.06

The Cult – Electric
How and why did The Cult transform themselves from paisley-patterned goths into leather-clad rock beasts – and does the result still stand up today? Score = 8.03

Free - Tons Of Sobs
A debut album from the youthful Free, a band with a couldn’t-care-less attitude honed on the rough-and-ready UK circuit of blues clubs and ballrooms. Score = 8.00

Slade - Slade Alive!
Slade may not have been cool, but they were a better live act than most, and Alive! captures the band at their fiery best. Score = 8.00

Jeff Beck - Truth
Eric Clapton's Cream were a year away from extinction, Jimmy Page was commandeering his own juggernaut, and Jeff Beck was determined not to be left out of the race. Score = 7.99

Soundgarden - Superunknown
Soundgarden may have been a little slower to hit the mainstream than Nirvana and Pearl Jam, but Superunknown catapulted them into the big time. Score = 7.84

Van Halen - Van Halen II
How do you follow an album that changed the world? For the most part it's rinse then repeat. Score = 7.81

Iron Maiden - Killers
Did Iron Maiden's second album build on the promise of their storming debut? And if it did, why did they get rid of singer Paul Di'Anno immediately afterwards? Score = 7.79

Metallica - Metallica
Metallica's Black Album turned them from rising thrash stars to mainstream rock icons. Did the compromise come at a cost? Score = 7.79

Blackfoot - Strikes
It took ten years for Blackfoot to become an overnight success, and a week for the Album Of The Week Club members to compose the definitive review of Strikes. Score = 7.78

Queensryche - Rage For Order
The Prog Metal pioneers created a new sound on the second full-length album... their own. Score = 7.73

Kate Bush - The Kick Inside
A talent who existed apart from the norm, nobody else makes music quite like Kate Bush... even at the very beginning. Score = 7.72

Ted Nugent - Ted Nugent
In which the Motor City Madman makes his solo debut, and the world is never the same again. Score = 7.72

Rainbow - Down To Earth
Out with Dio, in with the Hawaiian shirt bloke. What was Ritchie Blackmore up to with Rainbow's Down To Earth? Score = 7.67

Black Sabbath - Mob Rules
Bill Ward was gone. Everyone involved (including the producer) were battling drug problems. The following year, half the band would depart in acrimony. How does Mob Rules stand up today? Score = 7.63

Living Colour - Vivid
At a time when rock was increasingly looking beyond its own frontiers for inspiration, Living Colours' Vivid was a genre-mashing stake in the ground. Score = 7.62

Mother Love Bone - Apple
Apple bridged the end of hair metal and the beginning of grunge, but Mother Love Bone's one album will forever be associated with tragedy rather than transformation. Score = 7.44

Led Zeppelin - Presence
Presence is an album Jimmy Page rates as one of Led Zeppelin's best... but it was made under very difficult circumstances. Score = 7.31

Janis Joplin - Pearl
Released in January 1971, just three months after her death, Janis Joplin's Pearl was described by Rolling Stones as, "not a new Janis, but a redefined, more organised, old Janis". Score = 7.26

The Zombies - Odessey & Oracle
A psych-pop masterpiece that was a commercial flop, but it has since gained the status of a classic, regularly making it onto the ‘Best Albums of All Time’ lists… Score = 7.19

Emerson, Lake & Palmer – Tarkus
Side one is an acknowledged prog masterpiece... but how much does side two drag the overall score down? Score = 7.07

The Sensational Alex Harvey Band: Framed
SAHB crept up on an unsuspecting nation, grabbed it by the balls and won hearts and minds in unison Score = 7.05

Aerosmith - Rock In A Hard Place
How does the album Aerosmith released without Joe Perry stand up after all these years? Score = 7.04

Greta Van Fleet - Anthem Of The Peaceful Army
Greta Van Fleet: are the here to save rock'n'roll or sully it? Both opinions are available. Score = 7.02

Girlschool - Demolition
Girlschool didn’t so much sound like they might scratch your eyes out as boot you in the balls and nick your beer. Score - 7.01

Heart - Little Queen
"We were unusual among friends at school in that we wanted to wanted to be The Beatles rather than marry them” - Ann Wilson.  Score = 6.98

Starz- Starz
Are Starz the "Big Star of hair metal"? Examining the debut, self-titled album may provide some answers. Sore = 6.97

Whitesake - Saints & Sinners
Saints & Sinners by Whitesnake features two songs that would later be successfully remodelled... but what of the rest of the album? Score = 6.81

Fleetwood Mac - Tusk
Some albums are so big that the follow-up can only be a disappointment. Did Tusk suffer this fate, or is gold concealed within? Score = 6.75

Saxon - Saxon
Part rock, part prog, under-produced and released on a French disco label: it can only be Saxon's debut album Score = 6.61

Eagles - The Long Run
Following up Hotel California was hard enough, and The Long Run showed there was life left for Eagles... but not for long. Score = 6.33

Bruce Springsteen - The Wild, the Innocent & the E Street Shuffle
He hadn't been tagged the future of rock'n'roll yet, but Bruce Springsteen was beginning to make the right noises. Score = 6.32

Suzi Quatro - Suzi Quatro
The self-titled debut album by the original Queen Of Noise, Suzi Quatro, strives to prove she was more than a singles act. Score = 6.29

Steve Vai: Flex-Able - Album Of The Week Club review
Fresh from working with Frank Zappa, a young Steve Vai took what he'd learned and made an album no one was meant to hear. Score = 6.26

T. Rex - Dandy In The Underworld
Touched by tragedy, T. Rex's Dandy in the Underworld was seen as a return to form by many. Score = 6.14

Survivor - Eye Of The Tiger
An overbearing hit single became the soundtrack to the 80s – but have Survivor stood the test of time? Score = 6.11

Blue Cheer – Vincebus Eruptum
50 years on, does Blue Cheer's debut Vincebus Eruptum deserve its status as the first metal/heavy album? And, even if it does, does that make it any good? Score = 6.08

Johnny Thunders - So Alone
The star-studded pinnacle of Johnny Thunders’ solo career, So Alone is not a perfect album, but its faults are easy to love... or hate. Score = 6.02

Genesis: Abacab
In which Genesis cause controversy and dismay by turning their hand to shorter, more pop-orientated songs. Score = 5.62

Bon Jovi: 7800° Fahrenheit
Bon Jovi's second album 7800° Fahrenheit failed to launch the band towards superstardom in the way its follow-up Slippery When Wet did. Can our reviewers figure out why? Score = 5.54

Kiss - Music From "The Elder"
In which Kiss go Prog and alienate everyone... or not, as our reviewers clearly prove. Score = 5.31

Radiohead - OK Computer
OK Computer is the album that took Radiohead far into the mainstream, while retaining rockist cred – at least to some. Score = 4.90