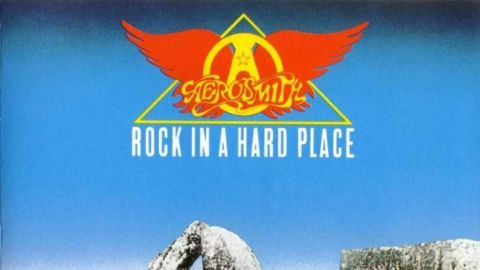 The second edition of the Classic Rock Album Of The Week Club features a recording by a band caught in a difficult moment. With Steven Tyler not seeing eye-to-eye with sobriety and both longtime guitarists missing, Aerosmith turned to session musician Jimmy Crespo and spent more than a million dollars in crafting Rock In A Hard Place. It should have been a disaster… but was it?

The idea of Album of the Week Club: we all listen to and discuss the album in question, vote on how good it is, and our findings will be published online each week, giving people reliable reviews of albums and the wider rock community the chance to contribute. Like reader Richard Cardenas says, “I’m loving this opportunity to discuss this music with those who were there with me and with those who are now discovering it for the first time.”

Here’s what we learned about Rock In A Hard Place.

Classic Rock writer James Halbert marked it out as the “runt of the litter - one to avoid” while compiling an Aerosmith Buyers Guide for the magazine, but it’s always polarised opinion. Paul Elliott, compiling a list of underrated tunes by the band, said, “No Aerosmith album is as underrated as Rock In A Hard Place,” referring to it as an album full of “killer songs.”

The band were in crisis. After 1977’s Draw The Line, tensions between frontman Steven Tyler and guitarist Joe Perry had grown to the point where their relationship was unsustainable. “We were pretty burned out,” said Perry. “And instead of taking a vacation, we let loose on each other.” Perry quit during the recording of the follow-up, Night In The Ruts, and amongst the musicians drafted in to fill the gaps was Jimmy Crespo, a session musician from New York. He played lead on Three Mile Smile and ended up joining the band. Two years later, Brad Whitford quit the band shortly after the recording of the follow-up, Rock In A Hard Place, began. And Steven Tyler? Let’s just say he wasn’t entirely focussed.

Other albums released in 1982:

Iron Maiden – The Number of the Beast

The Misfits - Walk Amongst Us

Jethro Tull - Broadsword And The Beast

Rainbow - Straight Between The Eyes

Saxon - The Eagle Has Landed

Survivor - Eye Of The Tiger

Kiss - Creatures Of The Night

Krokus – One Vice at a time

The video created for the first single from the album, Lightning Strikes, was the first the band had created specifically with MTV in mind. The station had launched the previous year, and it was an approach that would bring gargantuan rewards a decade later, as the era of the big Aerosmith ballad began. It was directed by Arnold Levine, who had previously worked on clips that accompanied Chiquita and No Surprize — from Night In The Ruts — plus the live video of Chip Away At The Stone from 1978’s Live Bootleg. Levine also worked on videos for Billy Joel, Bruce Springsteen, Loverboy and Meat Loaf.

“I remember seeing that video on MTV,” says reader Marian Ferro. “I found it a little weird because I thought they looked a bit old to be gang members out on the street!”

“If they really spent 1.5 mil on this album, the dealers got rich,” adds Eddie Peuker. “This video is still not doing it for me!”

Gerry Ranson: The only Aerosmith album I’ve bought on release, thanks to a 4-star review in Sounds and, in the grand scheme of things, their last great album. Jimmy Crespo and Rick Dufay deserve medals!

Chris Wigmore: For Aerosmith today, this must be like looking back on that shameful time when the parents split up and the kids went into custody. The title track has more than a hint of their classic Same Old Song and Dance and is none the worse for it, so that’s easily three great tracks on here, which is a far better average than the next offering ‘Done With Mirrors’ - and that had all the guys back together. It wasn’t until 1987’s Permanent Vacation that they pasted over the cracks properly, got the kids out of custody and made up for lost time.

Joshua Nelson: There are a few things about the production that I’m not a fan of (robot like voice in Prelude to Joanie), but songs like Cheshire Cat and Bolivian Ragamuffin have a great, hard hitting groove. Someone once compared Aerosmith to a swing band. This album is one of the better examples of that.

Richard Cardenas: While the first three records were, and will always be my favorites, I think this was a pretty good record. You still had the grit that made Aerosmith but the presence of two members that were probably in better shape than Perry helped give it a fresher sound.

Maxwell Martello: Truth be told, this is an okay record that falls short of both Aerosmith’s legacy and what their peers were coming up with at the time. I mean, speaking of 1982, I’d have Creatures of the Night by Kiss over this one any day of the week! Kiss had successfully transitioned into a heavy metal juggernaut (thanks to Vinnie Vincent). Aerosmith were still stuck in a hard rock limbo reminiscent of their 70’s output. It’s a heavy record, but not a forward looking one.

Paul Nadin-Salter: To me, it’s a 4⁄5 Aerosmith record. You can tell that Joe is missing. The guitars are good but too much whammy bar in the style of poodle rock doesn’t fit with the rest of the band. Joe went off to record Let The Music Do The Talking which is much better. Vocoders and the strained vocal on Cry Me A River don’t help either. It’s Ok but not a classic.

Tommy Pearson: To me, the last truly great Aerosmith album. Nothing they released after this one had the same funk and swagger of Rock in a Hard Place and all the others that came before.

Shane Hall: I was 16 when this album was first released, and I admittedly paid it little mind at the time, preferring instead Aerosmith’s ‘70s material. Despite the absence of Joe Perry and Brad Whitford, Rock In a Hard Place is really a better album than I remembered and one with a lot of the elements that make a great Aerosmith album.

Stan West: I do think the record misses Perry though, especially when it comes to great riffs. Perry wrote some all-time classics and that’s one thing this album is lacking. No truly great riffs. Probably the closest is Bolivian Ragamuffin which has got that loose, Perry-style riffing on it and is super underrated.

James Utvandraren: Tyler is pretty weak throughout, and the generic guitar riffs are unimaginative and straight out of any local band blues night at the dive bar on a Saturday night. The whole thing sounds like pre-production demo outtakes of loose ideas around what could have been an awesome album. The kind of crap you get as bonus tracks on the “Anniversary Deluxe Reissue” 30 years later.

Eddie Peuke: I still don’t like this album much. I am glad I never paid for this stuff. I will probably never listen to these tunes again. Unless, someone helps me to understand how this version of Aerosmith was far more talented than what my ears have made me feel is so true today. Their best work came before this album.

AllMusic: Rock in a Hard Place is the sound of Aerosmith at their most “out of it.” Not to say it’s a horrible album by any means – in fact, there are more than a few pleasant surprises – but without the guitar team of Joe Perry and Brad Whitford, it didn’t possess the magical chemistry of their ‘70s classics.

Rolling Stone: In the three years since the group’s last studio album, Night in the Ruts, a minor revolution has taken place in heavy rock, and its insistence on hard, fast power chords has made Aerosmith’s bluesy boogie almost obsolete… Maybe next time Aerosmith will stick to the rock; for now, however, they’re really stuck in a hard place.

Done With Mirrors: The album that took Aerosmith back to the big time