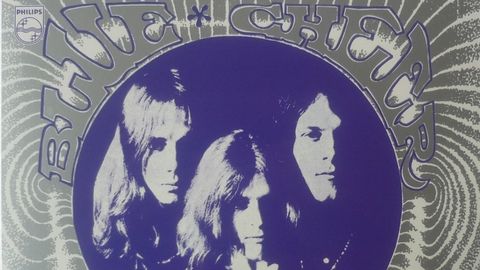 The first ever Classic Rock Album Of The Week Club kicked off this week, with a landmark album that’s 50 years old this week: Blue Cheer’s Vincebus Eruptum.

The idea of Album of the Week Club: we all listen to and discuss the album in question, vote on how good it is, and our findings will be published online each week, giving people reliable reviews of albums and the wider rock community the chance to contribute.

Listen to Vincebus Eruptum on Apple Music, on Spotify, or on YouTube.

The signature track of Vincebus Eruptum, Summertimes Blues lays out the band’s stall. The Who’s version sounds like it’s played by people who love rock’n’roll. Blue Cheer’s sounds like they hate it - or at least have a love/hate relationship with it. Maybe they think it’s too corny, old, irrelevant - either way, they’re dragging it into a new age.

Anyone familiar with the original - or even The Who’s cover - will know that the verses end in a sort of call and response. Eg:

…Everytime I call my baby, to try to get a date, my boss says

…Well I called my congressman and he said, quote:

[Deep congressman voice] “I’d like to help you son, but you’re too young to vote”

Blue Cheer don’t bother with the response part of the lyric. The voices of the parents, the boss and the congressman are replaced by, well, noise. The voice of authority drowned out or maybe reduced to just a drone.

Cochran’s version is gently anti-establishment but it’s from a time that still believed in consensus – the prosperous post-war boom. Blue Cheer’s is from a more divisive age. The dream is over: Vietnam raging, Kennedy and MLK dead, the civil rights struggle, the tune-in, turn-on, drop-out movement in full force. It’s less jokey, more nightmarish: there is no cure.

Here are what the rest of the Album Club thought:

Stan West: “I can see where some of their guitar licks here might have been inspiration for Zakk Wylde and what he tries to do with pinch harmonics. They both throw in a nice high pitch lick or squeal to compliment the heaviness of the riffs.”

Maxwell Martello considered the influence of Hendrix: “The riffing, the tone and the feedback abuse borrow heavily from Jimi, but, again, musicianship and inventiveness are toned down, while aggression and intensity are turned to 11!”

Iain Macaulay: “I bought it 22 years ago while in a band that were influenced by Kyuss - and it fits with that style more than pure metal. Its the MC5, Stooges, Pink Fairies, Hawkwind, underground music, dirty and raw, DIY proto punk to me.”

Shane Hall: “If you liked this album and want to check out more Blue Cheer, try the albums Outsideinside, The Beast is Back, and Oh! Pleasant Hope. The latter is closer to ‘70s singer-songwriter folk rock and thus, a little out of character for the trio, but worth a listen as it shows their versatility.”

Boris Bregmen: “I’m not sure this ever got released in New Zealand so this is the first time I’ve heard it. Love the raw sound, and the blues influence. I don’t see the comparison to Sabbaths first, more a Hendrix/Who/Cream thing going on, live in the studio. I’m sure it influenced Rory, Purple, Zeppelin, or at least they heard it liked what they heard and a bit of it rubbed off on them.”

Martin Bailey: “I find this style of fuzzy feedback guitar too loose and noisy. Great vocals though, punky at times. The drums are heavy, vocals powerful, let down by guitar when it gets too muddy or psychedelic. Bloody racket (I say this as a Slayer fan). Noise doesn’t mean heavy. Credence Clearwater Revival to me, although similar in some ways, have a heavier sound at times as it’s tighter and punchier.”

Chuck Miller listened to it first time around: “Definitely the first Classic Rock Album for me. I remember just like it was yesterday . Me and my buddy picked up because of the cover of Summertime Blues. We lit one up put in on the turntable and I was hooked. Platted everyday for three months straight. Just ain’t no cure.”

Not everyone was as positive, reflecting the final score:

Alistair McIntösh summed up the negatives well: “I’m afraid I found this album very dull. It’s not heavy metal by any definition and isn’t even very good as a blues album. I appreciate that I have the benefit of 50 years of perspective but it hasn’t aged well so couldn’t be considered ‘classic’. I have heard later Blue Cheer songs which are better. Obviously most of these are covers but it’s just pure self-indulgent psychedelia.”

New: The Classic Rock Album Of The Week Club