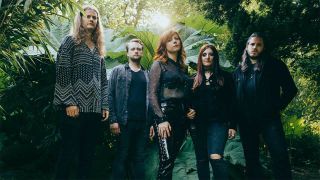 This week, Black Moth are releasing their third full-length album Anatomical Venus – the follow-up to 2014’s Condemned To Hope. In Metal Hammer issue 306, we sat down with frontwoman Harriet Hyde to discuss why Black Moth have written an album revelling in the mysteries of sex, death and female identity. To give an even deeper understanding of Anatomical Venus, we also chatted to Harriet about each song individually to get the ultimate track-by-track guide to the record.

“Istra is the first song I wrote the lyrics for, based on my Anatomical Venus meditations. I chose one particular model from the book by Joanna Ebenstein and tried to put myself in the skin of the wax girl, imagining what she might feel like, having been created as a beautiful, exposed object for men to use to learn about women. I was also reading Til We Have Faces by C.S. Lewis (a book about the myth of Cupid and Psyche) at the time, and I believe some of the themes seeped in. I love this song for the dynamic shifts and I love performing it as I get to wail to the goddess Aphrodite onstage!”

“The lyrics for Moonbow are actually a poem written by my close friend Jessika Green. It was reading this poem that made me realise I wanted to collaborate with her on the album. It is an ode and an offering to the moon herself, and has its roots in Jess’ interest in Dianic Goddess Worship. We chose it as our first single and made a video as it shows how far we’ve come, musically. For me, the guitar work is some of my favourite on the album!”

Sisters Of The Stone

“A fists-in-the-air anthem for wronged women, inspired by some horrible stories I had heard from close friends about abusive relationships, as well as the ripples of violation felt by many women in the aftermath of the exposure of America’s ‘pussy grabbing’ President. Considering it was written over a year ago, it felt very timely releasing this on the centenary of Votes For Women, and with the wave of female empowerment around #metoo/#timesup campaigns. I had Tarantino’s Death Proof as well as the Maenads of Ancient Greece in mind when writing. My favourite moment of our live show currently is when Jimmy and Federica cross axes on stage and play their amazing interweaving double solo harmonies. It feels like and expression of men and women standing strong together.”

“This was another of Jessika Green’s poems. Such beautiful words, I felt them as deeply as if they were my own when recording the vocals. Backing vocals are done by Paul Astick from Hawk Eyes and I think he brings a Josh Homme croon to an otherwise very Alice-in-Chains-y vibe – which is just perfect.”

“This is the track that most clearly references the Anatomical Venus theme and what the objects meant to us – the surgical excavation into the spirit of women. A knowledge that cannot convincingly claim to be merely scientific. There’s absolute mammoth riffery on the verses and a very heavy anthemic chorus. The quiet middle section is at first beautiful and delicate before exploding into a roaring solo section.”

“This was one of those songs that just wrote itself. It’s spat out with venom and rage, such was my mood on the day it was birthed! It’s a little look at the hateful side of love, and how painful it can be. ‘Stronger than a lover’s love is a lover’s hate/Incurable, in each are the wounds they make.’ Musically it has so much swagger, it’s a fucking scream to play live. When we were auditioning Federica, this is the track we showed to her, and asked what she would play on it if she were to join the band. She busted out an absolutely scorching lead riff and we were all just like, yep!”

“This was a really tricky one to write. It was actually Jimmy’s idea to do a song about the epidemic of our time – the drastically unhealthy world of social media and mobile phone addiction. It’s such an ugly, unpoetic topic so it was a challenge to work with, but it seemed so important to make a comment on. Black Moth are a band of 2018 so if we weren’t writing from a place of reality as we know it, we’d just be irrelevant. The instrumental part of this one feels like a video game or a car chase or something… another fun live one.”

“Another poem by Jessika. The richness of her language and imagery is just so opulent and intoxicating. It’s hypnotic, and I knew we had to write something as sumptuous as the words themselves. The digital version album features a bonus track with Jake Harding from Grave Lines singing harmonies, and I have to admit I’m in love with this version. His voice is incredible.”

“I think this one feels quite Uncle Acid And The Deadbeats-y, so maybe this was written soon after we toured with them! It’s about the superhuman level of courage and vulnerability it takes to risk loving someone. When I listen now it has a sad feel to it. I think I had the heartbreaking film Breaking The Waves with Emily Watson in mind when I wrote the lyrics, which is an old favourite that still haunts me to this day.”

“Okay, this one is a bit of an anomaly! Ha! Much more of an old school Black Moth song than the rest of the album, and continues our running theme of songs about wild paraphilias (such as Looner and The Articulate Dead). I had been reading a book called Perv by Jesse Behring when I wrote it, and he talks about the witch hunts of New Haven and these guys they called ‘Pig Men,’ which were farmhands or people who had been caught having sex with barnyard animals. The belief was that they were trying to spawn satanic offspring that would then bring Satan to Earth – some were even executed for it. it’s too good a story to not do a song about! Also our drummer nearly died playing the crazy drum freak outs at the end in the studio. Each time he would go completely nuts and nearly pass out in the process, then our producer Andy Hawkins would say ‘Yeah that was pretty good but you can give it more’. He replicates this live and normally needs to vomit upon leaving the stage.”

Black Moth’s new album Anatomical Venus is out March 2, via Candlelight and is available to pre-order now.