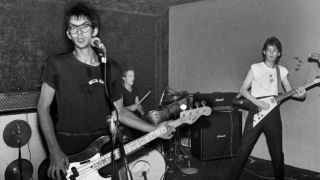 While they might only have been a band for three short years, the career of first-wave Texas punks Terminal Mind was a storied one. Alongside being offered coveted support slots alongside Iggy Pop and The Big Boys, between 1978-81, their ability to spin the sounds of John Cale, Wire and The Clash into their own brazen racket allowed them to lay down a template for punk mimicked by generations of Austin punks who followed.

But for almost 40 years now, the band’s collected output has lain dormant. Until now. Cut to today, and Recordings, their first-ever official album release, collects the tracks from their original, out-of-print 7” (which gathers a pretty penny over on Discogs, for those interested), their contributions to the Live At Raul’s compilation, along with a host of previously unheard tracks.

To celebrate the album’s release, frontman Steve Marsh talks us through the album, track by track.

I Want To Die Young

“This was the lead song on the four-song EP that we recorded in September 1979. When I wrote this song, I remember being bored silly by the conversation topics of my elder relatives at a family reunion and the lyrics just falling out of me.

One of my favourite LPs at the time was The Who Live At Leeds. I played that record to death; I loved that version of My Generation. I wasn’t even thinking about that song when I wrote this one, but it certainly gave me permission to put my angst into words. There was definitely an anti-old fart agenda going on [laughs]. Yet, the song is still relevant now I’m over 60: it’s about how you live your life, not how long it lasts.”

“The lyrics for this song were loosely based on the latter years of Arthur Rimbaud, long after he had given up poetry. He was a gun runner and coffee merchant in North Africa, and developed what turned out to be bone cancer in his leg. He was trying to get back home and died in Marseilles after an amputation. I was introduced to his writing by being a huge fan of Patti Smith. The subject of feeling like a refugee, of being lost between lines, is perennially relevant.

This was song number two on the EP, which came out in January of 1980. Right at the exact same moment as Tom Petty’s Refugee. Oh well.”

“I made it a point to not write love songs, but occasionally I would write an anti-love song! This one was inspired by the desperation and total abandon that I observed on the dance floor at gigs. I say “observed” – I don’t dance. This was song number three from the EP.”

“The final song from the EP was always the set closer. I remember sitting on my porch one afternoon, and some frat in the neighbourhood was playing Jungleland by Bruce Springsteen so loud that you couldn’t escape it. That song just felt like the perfect summation of everything I hated: cute, nostalgic escapism. A perfect soundtrack if you were a moron in business school and wanted to feel a little ‘rock’n’roll’ without having to commit anything to it. Nothing like the world I was living in! I remember thinking ‘This music will rot your brain! Jungleland – more like Zombieland’.

The big rave-up section was another result of the influence of My Generation from Live At Leeds. Every time we performed this live, I would try to come up with something different to spout off about, either an anecdote or an observation, just to make it a unique event.

When we recorded the song, in order to simulate the bullhorn tone in the spoken section, I recorded myself into a portable cassette recorder in a closet, then played it back into a microphone during the vocal tracking. I also got our guitarist Doug to track a layer of anti-solo noise, but we only used the very tail end of it on the original EP, as the song comes out of that section into the last verse – I was talked out of using more. When we were dumping the tracks to digital to do the remix, on what was probably the very machine that we had recorded it on originally, I found out that we had recorded three extra noise tracks, so I was able to mix them in while still being true to the original recording.

“This was one of two songs that we recorded as demos with a friend of ours named Kerry Crafton, who was studying to be a recording engineer. It was done in the studios at the University of Texas’ radio, television and film building. Kerry went on to record Scratch Acid, Roky Erickson, Agony Column, and tons more, but we were his first guinea pigs, and he gave us our first taste of a recording studio. Being a college studio, it was a lot brighter and cleaner than any professional studios I’ve been in since!”

Fear In The Future

“This is the other demo. I can hear the influence of John Cale on these, from the Island Records era. I asked Doug to play a solo with as few actual ‘notes’ as possible, kind of an anti-solo, to set an ominous, lurking tone. The robot voice at the beginning was a bit much, but otherwise I think this holds up nicely.”

“Now we’re into the live tracks. This song and the next originally appeared on the Live At Raul’s compilation LP, along with The Next, The Skunks, Standing Waves, and The Explosives. Each band recorded a set to a mobile truck and then picked two songs to be included on the album. There was never any question that this would be one of our selections, although I can still see the look on Doug’s face glaring back at Greg on the drums as the song tempo just took off!

Back then, I was working at a sandwich shop called Thundercloud Subs that used to play the local rock station on the radio. I was working a lunch rush around the time that the record came out, and I was hearing something that sounded a lot like this song playing on the radio, and I was thinking ‘damn, somebody else beat me to it!’ Turned out it was actually my song – I just never expected to hear it on the radio.”

Bridges Are For Burning

“Another anti-love song; I can hear an influence from the early era of Ultravox. I loved their record Ha! Ha! Ha! This one made the cut onto Live At Raul’s because I kept forgetting the lyrics to the one I wanted to include!”

(I Give Up On) Human Rights

“This would have been my pick to go on Live At Raul’s, but it was a new song and I didn’t have the words down yet.

The theme I was dealing with was an exhaustion with people expecting the world to be fair. It just seemed like protesting the evil things that were happening in the world, or even expecting a sane approach in America to the issues of the day, was just hopeless and ultimately getting nowhere. The song turned out to be a kind of revenge fantasy of the oppressed; an identification with radical action as opposed to peaceful demonstration. If the world didn’t care, then you’d have to make ‘em care. Like I said: fantasy.

I have a friend who has an archive of recordings from that period of the scene, and this came from a rough board mix of the set for Live At Raul’s. Fortunately, it was the only tune from that mix that sounded like it was mixed right. It’s got a Clash/Wire vibe to it that I like a lot.”

“This song was inspired by a girl named Melissa who was our super-fan. She used to wear all black to every show, and she even had a little “no symbol” tattoo. In keeping with my thoughts about love songs, I figured that it was okay to almost write a love song if the title was Black.

Both this song and Black were from a tape that somebody recorded with a portable cassette recorder one night at Raul’s. We were able to clean it up and make it sound a lot better than the original, which was totally muffled sounding. We even had to simulate stereo at one point because the cassette player apparently malfunctioned briefly; maybe the person holding it didn’t realise they were pressing on something that caused it to track mono!

Again, you can hear the John Cale influence, and maybe a little Stooges. This song is probably the earliest piece written that is on the album. Every set needed one song about mental instability that fell apart at the end.”

“This is the only recording I could find of the band once my pal Jack Crow (R.I.P.) had joined on synth. It comes from a live video shoot at a street party near the UT campus. You can hear the sound change as the camera moves around and the mic changes direction. Those street parties were a blast! There was a church with a large outdoor patio facing the side street that served perfectly as a stage. We played with The Big Boys, Standing Waves, The Next.

The topic of ‘bureaucracy’ as a metaphor for detachment (and psychosis) seemed pretty obvious at the time, though I would probably substitute ‘corporate control’ if I was writing it today, since that seems the bigger threat now.”

The New York punk albums you need in your record collection