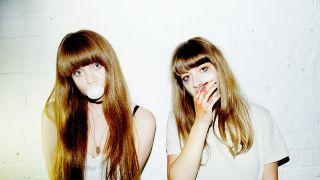 Roll up, roll up, for this week we’re introducing the glorious, groove-laden sounds of London-based two-piece The Pearl Harts. Raised on a steady diet of riff-heavy classic rock’n’roll and 80s funk, the duo capitalise on that heritage while dragging it firmly into the 21st century.

We catch up with the duo to learn all about the band, their sound and their debut album Glitter And Spit.

Kirsty: “We first met when a band I was playing in was looking for a drummer. Sara fit the bill perfectly – she gave a badass loudness to it. It turned out that band wasn’t in it for the long haul, but we both remained solid and wanted to keep playing together.”

Sara: “We met on the road in other bands. We bonded during some pretty intense touring one summer, and then ran away together to make some heavier sounds.”

“A lot of 70s influences originally – Black Sabbath and Led Zeppelin for the riffs and bombastic drum sound. We’re also a big fan 70s and 80s funk, anything with a good groove or swagger. We wanted to modernise these old sounds, which is why we brought in samples and loops, to mix things up a bit but also create something fun, something we could both have a voice in. Vocally, we like strong female rock vocals – PJ Harvey, Brody Dalle, Kathleen Hanna.”

Kirsty: “We’re not afraid to be ourselves. It feels likes we’re in a time where it’s so important to be ‘liked’ or popular, but actually we’re coming from something organic and real. If you don’t like it, fuck off.”

Sara: “Fearlessness and the drive to make people feel something. Our live shows have an almost punk delivery and urgency to them. A lot of modern music feels quite polished, but we’re not afraid of things going wrong. I think people thrive on that feeling. Watching and listening to a band is supposed to be an escape – there’s supposed to be a wildness there that people can’t get in their everyday lives.”

What’s the story behind the new album Glitter And Spit – how did you approach writing and how did it come together?

Kirsty: “Some of these songs have been a while in the making… it’s been a journey but also it’s quite pure – a bit of rebellion and runaway. We’ve been friends for a long time, so writing material seems quite honest. We know each other so well that sometimes the songs are our fantasy of a different life together.”

Kirsty: “It was all fun! We would stay over at our producer Tobin’s house and sleep together on the sofa bed while talking each other to sleep while also being totally wiped from the days recording.”

Sara: “I can’t actually put in to words what I want to say about the story of recording this album! It has been a proper rock’n’roll journey from start to finish. A lot of stops and starts – maybe one day we can write a book about it.”

Kirsty: “Mine personally is Livings Done, I feel like I want to imagine myself jumping up and down on my bed feeling liberated and angry to that song.”

Sara: “It has to be a toss up between the more epic tracks on the album, Hurt and Lost In Time. I guess we’re known for being very heavy and in your face, while these tracks sway to a more reflective sound. Who knows where our sound and ideas can take us in the future?”

Kirsty: “I’d like to think people will see that we’ve created an invigorating, fun, personal record. That’s what I liked when I grew up – something that related to people.”

Sara: “We want to make people feel something, whether that be anger, desperation, love, defiance, empowerment. Hopefully our music speaks to people. Life can be disenchanting, but if you can step out of that at gig and lose yourself, then that’s our ultimate aim! We’re looking forward to getting our music out to smaller towns, like where we grew up, and find that magic in musical excitement that we knew growing up.”

The Pearl Harts’ debut album, Glitter And Spit, will be released 23 February

New Band Of The Week: The Nectars

New Band Of The Week: The Spook School