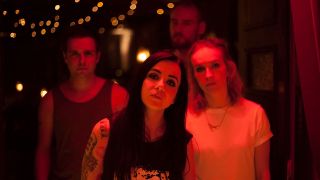 Brace yourselves, new music fans, for the sounds of South-London quartet Pretty Pistol. Fresh from a supporting slot with Irish punk legends Penetration, the band channel the grit and spit of punk’s snottiest forebears and combine it with their shared mission to musically “kick your head in – in a good way”.

We catch up with the band to find out more about where they’ve been and where they’re going next.

“Emma and I first met at a Hole gig in Birmingham when we were teenagers; obviously we got drunk and trashed the hotel room, because that’s what drunk teenage punks do. Me and Billy started talking about putting a band together a couple of years ago, so I got in touch with Emma to join on drums. Rich joined in late 2017 after our first bassist left, and since then we’ve just kept at it, gigging, writing new tunes, drinking and recording. Not necessarily in that order.”

“I love Courtney Love and Hole, so there’s some of that in there. Nirvana, Be Your Own Pet, Yeah Yeah Yeahs – the boys keep trying to slip Beatles harmonies in, but they haven’t succeeded yet. They’ll get there one day, maybe.”

“All of our music comes out of a kind of chaos. It’s pretty rare for us to sit down with a guitar and write a song in that traditional kind of way. We just make a shitload of noise and hack away at it until there’s something that looks like a song, then we get to work on it. We take the same approach to playing live. So many bands just stand there and do nothing. That’s fine for them, but that’s not us. We’re here to do a show, not pose in a shop window.”

What’s the story behind the new single Cry Wolf, and how did it come together?

“Cry Wolf came together really quickly. We were going to the studio in a week and needed an extra song to take to the session, so we hammered that out, and it ended up being one of our favourites – it’s always the way. The song’s about liars, and what little shits they are.”

Can you talk us through the accompanying video?

“We needed something that was going to look cool, not cost a lot and show everyone exactly what we’re about, so the director Tom Pullen had this idea for a one shot video of us playing and having the camera weave in and out of us. We only had two hours to set up, shoot the video and get out of there, but luckily the song’s only one-and-a-half minutes long, so we managed to pack about 30 takes in. Punks are efficient, people.”

What’s your favourite story/anecdote from recording the single?

“Our producer John Mitchell wanted us to teach him how to use Instagram Stories to promote the studio, but he spent most of the time filming Billy and singing Be Our Guest from Beauty And The Beast at him. I think it was because Billy’s French, and therefore identifies with Lumière. Maybe we should cover it as a tribute.”

What do you hope people will take away from the single and your music in general?

“We want people to listen to Cry Wolf and enjoy having the song kick their head in. Same goes for the rest of our tunes, and our live shows, except you might actually get your head kicked in there. In a positive way, though.”

“We played the O2 Academy in Islington last year, supporting Penetration on their 40th anniversary tour. That was our biggest show yet, about 700 people. We couldn’t believe it, the crowd looked massive. But now we’ve had a taste and we want more, so if Reading and Leeds are looking for headliners already, we’re ready.”

“You can expect to get covered in beer if you’re standing too near the front. Is that a joke? There’s only one way to find out…”

“Our next single, Drive Me To The Dogs, comes out on 23rd February, and we’ll be throwing a free single launch gig at Birthdays in Dalston on 1st March with some of our favourite bands. Then we’ve got an EP out in April – we’re really proud of it, and can’t wait for everyone to hear it. We’ll be getting out of London to take the Pretty Pistol experience to the rest of the UK. Non-Londoners, we’ll be coming to a town near you soon.”

New Band Of The Week: The Nectars

New Band Of The Week: The Spook School