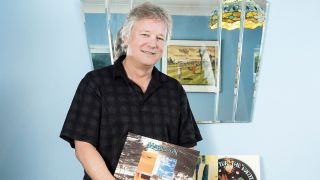 “We liked music in our house. I took piano lessons and my dad could play piano and other stuff too, but not usually when we were around.”

”I didn’t play close attention to music until I was 13 and saw** Cat Stevens** in concert when we lived around Washington DC, then I bought Teaser And The Firecat. We then moved to Ohio, and part of my getting into music came from us living on a farm with very few people around. I created a new world inside, and synthesizer interest is where the prog starts. I was in high school, 1973, aged 16. I heard a lot of Elton John’s Funeral For A Friend on the radio and that was really intriguing – also Rocket Man.

I got ELP’s Brain Salad Surgery that same year – it just blew me away, I still think it’s the ultimate synthesizer album. This was very different to what I’d been growing up listening to, but it just captured me. Then I found a radio station called WXR broadcasting from Miami University, Ohio, that played all kinds of prog and that’s where I heard all the British bands – Genesis, Yes, King Crimson. The big ones! My mom had my all-time favourite line when I played Yes: ‘I don’t like them, they’re too busy.’

There were a couple of trusted record stores about a half-hour drive away. You’d have to rely on browsing to find the prog stuff, look at sleeve art, read the notes. I’d never ask the record shop guy – that’s like asking for directions. At this time I discovered prog bands with female lead vocalists. Turn Of The Cards was the first Renaissance album I heard, and I loved Annie Haslam’s voice – I had an interest in classical music so this was a natural fit. Curved Air’s Phantasmagoria too – the lyrics and arrangements really struck a chord with me.

My dad was not a rock music fan, and he heard plenty of it, whether he liked it or not.

At college I worked at the radio station, DJing a prog rock show. I always started with Camel’s Slow Yourself Down. I’m picking I Can See Your House From Here because it has a lot of great songs on there. Yes, there’s a space theme on the sleeve, but I didn’t even think of that.

The next band to grab me was UK. I was already a fan of Jobson, Wetton and Bruford from other bands, but I didn’t know anything about Allan Holdsworth. The guitar playing I heard on that album was jaw-dropping, a real revelation. I was lucky enough to catch him on Cruise To The Edge in 2015.

As we get into the 80s, Marillion appear. Misplaced Childhood was the first album I bought by them, from the record store on a guess. When I got it home I was in love right away, and that doesn’t normally happen. This had something familiar – Genesis, Floyd – all put together in a way that was just fantastic. I then lived in Hawaii for a few years, moved back to Ohio in ’88 and bought Season’s End. All excited, I opened it up at home – I had no idea that Fish had left. It was kind of devastating. The first time I heard it, I was like, ‘It’s good, but I’m missing Fish.’ Then I listened to it about five times over and thought, ‘We’re gonna be alright.’ If I had to pick one desert island disc, though, it would be Marbles. There’s an incredible diversity of styles on that album, and it’s got The Invisible Man on it, which is the quintessential Marillion song.

In the infancy of the internet I bought CDs from The Laser’s Edge. Here I saw IQ advertised. I got Ever first – which I immediately thought was fantastic – then Subterranea, and its concert on VHS. It was an incredibly ambitious show for a very limited stage and budget, but they made the most with the least. I was looking for intelligence in lyrics, and interesting topics, and that’s what I found.

American prog is a smaller scene but I did see Kansas as a support to Yes in ’75, and Starcastle played at my college. Later I discovered Enchant because Steve Rothery produced them, and then there’s Iluvatar, from Baltimore. I’m a sucker for melodic prog, and these both did it for me. Two of the guys in Iluvatar are now in Edison’s Children, a side-project of Pete [Trewavas] from Marillion and Eric Blackwood. I’d met Eric at the Montreal Marillion Convention in 2011 – I’ve been to nearly all the Conventions – and he asked me to contribute guitar to a tour that sadly didn’t happen. However, I got to know The Final Breath Before November really well and that’s a wonderful album, a ghost story that actually happened to Eric.

I got into Rush in the early 90s. To me, they were originally more rock and less prog. I had a friend at work who told me to listen to Power Windows and it was really good. I became aware of the whole lyrical component and I still marvel at what three guys can do. Then I went back to Permanent Waves and became a big fan. Back then, I felt if keyboards were in something then that was prog. I’ve changed my opinion a little since then!

I’ve played guitar for a few years on and off, just as a hobby, inspired by two Steves, Hackett and Rothery. I’ve been able to quiz Steve Rothery on his playing and am lucky enough to call him a good friend now. His album Ghosts Of Pripyat is amazing. He was going for something like a soundtrack, and he’s so good at evoking emotion in a piece, I can see the movie playing in my head.

Then you have his other band, Wishing Tree, which is very different, acoustic. One song on Ostara, Seventh Sign, I heard that and thought, ‘This is like the theme from [TV sci-fi show] Firefly!’ It’s got an epic, Western style to it, and those female vocals again. I have albums by Fairport Convention and Pentangle so that side fits with my love of Karnataka and Panic Room. I’ve been with Panic Room from the beginning and their latest album, Essence, when they added Dave Foster on guitar, was a stroke of genius.

I have some metal in me! I learned to play bass on Black Sabbath tunes, and I’m sure my parents thought their world was coming to an end. My dad was not a rock music fan, and he heard plenty of it in the house, whether he liked it or not. In the early 90s I heard Dream Theater’s Images And Words. They have great technical proficiency, but it’s songs like Surrounded that I like best. Then Mike Portnoy teams up with Pete in Transatlantic so that’s another Marillion connection. Pete’s a busy guy.

Chris Squire means a lot to me. I started playing bass in high school and once I graduated from Black Sabbath, he was the man. Fish Out Of Water is the best solo album from the members of Yes, or of anybody! They did side one of the album at Cruise To The Edge last November and I never thought I’d see that live. Pete and Steve Hogarth contributed to that. It was very emotional.”