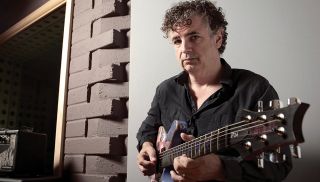 Earliest prog memory?
When I was 11, my neighbour would play me music and he had an Island Records sampler called Nice Enough To Eat [1969]. One of the tracks on that was [Crimson’s 21st Century] Schizoid Man.

First prog record bought, and where?
Air Conditioning by Curved Air, in 1970, from a shop on Lower High Street, Watford.

Favourite piece of technology?
iPhones and iPads. Being able to read books and newspapers, and to communicate on the move, is great.

My girlfriend fell in love with Ray Shulman. I was pissed off!

What would your prog Mastermind subject be?
Either Crimson or Henry Cow. Or Watford Football Club under Graham Taylor!

What has been your biggest prog extravagance?
I’m not that extravagant, but when I first signed a big record deal, I bought my parents a holiday in the Grand Bahamas.

Favourite venue?
I like the Albert Hall to play – it’s big but it’s in the round so feels intimate. But to see a band, The Rainbow.

Outside of prog, what are you into?
Football. I play twice a week, and I’m a Watford fan too. I’m also a theatre buff and see a lot of comedy. I was a film buff, until I had children…

Who is your prog hero?
Robert [Fripp], and Frank Zappa.

What do you collect?
Up to a point, I collected everything Robert, Crimson and Zappa ever recorded, but then I lost the collector bug. I also used to collect expensive vintage guitars, but most of them have gone the way of all tax bills.

What was the last prog album you bought?
Actually paid for? The Shaming Of The True by Kevin Gilbert. He was a West Coast musician who obviously listened to a lot of English prog. The album tells a story, the lyrics are astute and musically it’s amazing.

And the last prog gig you attended?
Steve Wilson at Hammersmith Odeon in January.

Have you ever been on a prog-related date?
Around 1975 I took my glamorous then-girlfriend Geraldine to see Gentle Giant and she kind of fell in love with Ray Shulman – couldn’t stop talking about him after. I was very pissed off. It almost put me off them altogether.

Who in the prog fraternity do you call for a good night out?
Nick Beggs is always enormous fun. He’s a great, great laugh.

What’s the most important prog song for you personally?
Prince Rupert’s Lament, off Crimson’s Lizard.

Who’s the prog muso you’d most like to work with?
Kate Bush or Peter Gabriel.

What prog album would you play to get you in a good mood?
Legend by Henry Cow.

Who’s the best prog artist you’ve ever seen live?
Henry Cow, at St Albans College back when I was 14. They ended up taking me for a curry, then driving me home. Best gig ever!

What’s your favourite prog album cover?
In The Court Of The Crimson King. So much so I have it on one of my PRS guitars.

And what are you up to at the moment?
I’m editing and mixing a live King Crimson DVD and practising additions to the repertoire for the autumn tour. I’ve just finished a new album with Dizrhythmia, my band with Gavin, Danny Thompson and Pandit Dinesh – the long-awaited follow-up to our 1988 debut! I’m also about to mix some Jethro Tull bits from their upcoming Songs From The Wood box set. Many other bits are lurking – I’m pretty busy!