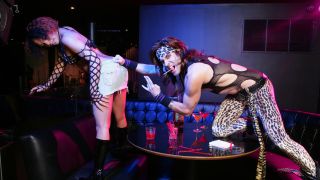 Valentine’s Day is one of those polarising events that either leaves you giddy at the thought of a surprise trip to Paris, or awakens the grumpy cynic within.

If you subscribe more towards the latter way of thinking, you’re in good company – some of rock and metal’s biggest names, like Strapping Young Lad and Pantera, have also expressed their disdain for schmaltz through their music.

Others, though, are big old romantics – Ace Frehley risked his driving license to speed back to his baby, while Motörhead’s Lemmy just wanted to be loved.

No matter how you feel about the subject of love, there’s a tune to suit your mood. We rounded up the best metal love songs, from the heartbreaking to the mushy to the downright weird, to get even the most hard-hearted of you in the mood.

Devin Townsend is a man after the hearts of relationship naysayers in this 2005 classic. He doesn’t sound particularly sold on the idea of falling in love, which is a feeling some of us know all too well.

Weeks of Tinder right-swiping that yields only one awkward date in an overcrowded pub could well have you clutching your temples and feeling a bit like Townsend as he rasps “So what’s all the fuss about?!’ It’s not all doom and gloom, though – Townsend himself is happily married to wife Tracy Turner. Maybe it was his ferocious, anti-love stance that won her over?

Here’s one we wouldn’t recommend listening to after a nasty breakup. Drummer Vinnie Paul  said This Love is based on Phil Anselmo’s personal experience, and from the chugging, melancholy prog riffs and lyrics referencing death, we’re guessing it wasn’t a great relationship.

It’s wholly relatable, though. Who hasn’t come out of a rocky long-term pairing feeling like they want to curl up into a despondent ball? This is definitely one to listen to once you’re sooooooo over it. Don’t depress yourself even more.

As relationship advice goes, this definitely falls into the ‘don’t try this at home’ category. A jilted boyfriend decides that the only way to win over the woman of his dreams is to do something completely not deranged and fucked up(read: totally deranged and fucked up), and eat her heart.

Cue a gross zombie love story, made somehow endearing by the animated video. Being dumped sucks, we all know that. Feeling like you might want to punish the person who did the dumping is normal. This guy, however, takes the whole crazy ex-boyfriend to gory extremes.

Ratt – Round And Round

The eighties (also known as the era of lusty cock rock) gave us this classic from Ratt, that uses the medium of spandex trousers and snappy driving riffs to chronicle those annoying first few weeks of a relationship when you’re not really sure what’s going on (or it might just be about sex).

Vocalist Stephen Pearcy takes on the role of moon-eyed romantic, meeting his girl for clandestine night-time trysts. Those first few, probably alcohol-fuelled dates before you take the plunge and make it ‘Facebook Official’ are arguably the most fun part of a relationship, and it seems like Ratt thought so, too.

Cradle Of Filth – The Death Of Love

You can always rely on metal to take the fluffy pleasantries of love and twist, mangle and deform them into something darker. Cradle Of Filth decided to use Joan Of Arc’s ex-boyfriend Gilles de Rais as inspiration for their 2008 concept album, Godspeed The Devil’s Thunder, and The Death Of Love is a gothic-tragedy retelling of the end of his relationship with Joan, ending with her – you’ve guessed it – burning at the stake. A reminder of the horrors of medieval witch hunts isn’t the most romantic subject matter, but then again, Dani Filth never was one to do things by halves.

Judas Priest – Prisoner Of Your Eyes

An uncharacteristically soppy number from Judas Priest sees them give their own take on the popular subject of unrequited love. We know, we know, there are hundreds of rock songs about this and Journey probably has the monopoly, but Judas Priest manage to make an incredibly mushy subject sound, well, not so mushy, because it’s still a full-on, theatrical, riffy hard rock song. That said, if you’re planning on making a romantic mixtape for a potential date, we’d exercise caution on this one.

It’s an unfortunate truth that in most relationships, the time will come when one party makes an ultimatum. ‘It’s me or the kitchen extension’ – that kind of thing. Lemmy’s ultimatum here is simply that he doesn’t want to be messed about, which is really quite reasonable.

“Love me forever, or not at all,” he growls, before going on to sing about breaking hearts and dying. We just want to give him a hug. He has got a valuable point, though – game-playing is never fun, and if the great moustachioed rock god Lemmy doesn’t put up with it, then nor should the rest of us.

They’re not known for their romanticism, but with Snuff Slipknot decided to have a go at the old ‘it’s not you, it’s me’ trope. Sometimes, after an argument or a split, all you want is a good, hearty blub, and this is one that’ll definitely bring the tears if you’re in the right mood.

Some people might opt for Celine Dion or Richard Marx (although they probably wouldn’t admit to it), but we highly recommend Snuff if you’re in the market for some lovelorn crying.

There’s regretting getting married, then there’s fantasising about chopping up your other half and using their blood as ketchup. Can’t say we’ve ever felt quite that strongly about someone, but then again, those Murderdolls might just be metaphorically letting off steam.

Seriously, how many times have you screamed ‘I’M GOING TO KILL YOU!’ at your hapless other half when they forgot to empty the dishwasher? Of course, you didn’t actually do it. Maybe next time channel your anger through this gnarly tune.

AC/DC – Let Me Put My Love Into You

As sex metaphors go, “Let me cut your cake with my knife” is right up there along with “I’m the drill, you’re the road” on the list of sayings you should never use under any circumstances.

AC/DC did use it, however, on this sultry, ever-so-slightly forward number. It’s a good one to crack out after a few whiskeys with your significant other, if you’re into that kind of thing, but as chat-up lines go, it’s not one for a first date, unless you’re plumping for a restraining order.

Steel Panther – If You Really, Really Love Me

If you ever find yourself on a date with someone who’s unemployed and plays Call Of Duty all day, yet has the balls to ask you to lend them money for a new surfboard, here’s a tip: LEAVE. Unless you fancy being the long-suffering partner of If You Really, Really Love Me’s lazy protagonist. He’ll sleep with your mate Melanie, rob your car and spend the rent money on a drum kit. Next stop – the Jeremy Kyle show.

Guns ‘N’ Roses – You Could Be Mine

Sometimes your other half just takes the piss, and you need to let off some steam. Axl Rose feels your pain – You Could Be Mine is his screeched lament to a failing five-year relationship, although he really isn’t doing himself any favours with demands like “When I come home late at night don’t ask me where I’ve been”.

We’re no experts, Axl, but we don’t think playing away is the best way to fix your situation. Having said that, his girlfriend doesn’t sound great either, with her “bitch slap rappin’”, whatever that is.

Ace Frehley – Speedin’ Back To My Baby

Lead Kiss axeman Ace Frehley’s first solo album gave us this bluesy gem, in which he turns his back on glam rock to make this chugging, twelve-bar ditty. There’s nothing gruesome here – no bleeding hearts or dying lovers – just Ace, feeling like a bit of an arse after upsetting his girlfriend, and driving at 95mph to go and make it up to her. Aww.

Probably one of rock’s most cheerful and inoffensive love songs, we’d advise taking a leaf out of Ace’s book and swiftly making amends if you happen to make your other half cry, although you should probably stay within the speed limit.

Some people, admittedly slightly weird ones, keep a list of all their conquests. Mötley Crüe on the other hand go one better and write a song about them. Same Ol’ Situation is basically a rundown of the girls they’ve met, loved and lost on their travels, and, given the Crüe’s reputation, we reckon they could have made it a lot longer if they’d wanted.

Not ones for commitment, they describe each short-lived relationship as “the same ol’ ball and chain,” which sounds like they prefer the single life. If you’re on your own this Valentine’s Day, stick this on and enjoy the freedom.