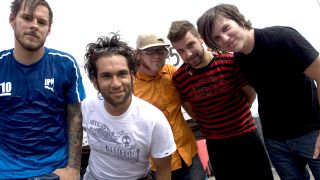 Humour and sarcasm have long been used as coping mechanisms when it comes to mental illness. Healthy or not, shielding yourself with these methods can help create a wall around you when admitting certain truths is something too painful to do with a straight face.

In many ways, Motion City Soundtrack’s breakout record, Commit This To Memory, is a testament to these coping mechanisms.

As a collection of music, it's largely conflicted. Lyrics are cloaked in self-deprecation, speaking to experiences singer Justin Pierre had with depression, anxiety, and substance abuse – while musically they're set to walls of sugary, breezy pop-punk. Still, within that conflict MCS drew in an audience. For a number of teens coming of age around the mid-2000s, Commit This To Memory would become an essential document of their formative years – a rite of passage for the young and unsteady.

For those following the band's trajectory in the years leading to the album's release in 2005, it would have seemed bizarre to suggest a Motion City Soundtrack record might wind up being so important. They had been a band since the late 90s, releasing two EPs to little fanfare. Their debut record, I Am The Movie, was self-released on CD. While it provided a few fan favourites, it lacked the precision of its follow up. There were rough edges – take the intro of Cambridge as a prime example – that were yet to be sanded over. Keyboardist Jesse Johnson hadn't yet hit his stride, joining just a few weeks before the album was recorded.

Instead of being a definitive artefact, I Am The Movie served as a glimpse as to what was to come. It was also pure lo-fi DIY in its execution: members pooled their own money to pay for the recording sessions and sold copies out of their van after shows.

So far, so punk rock. But something bigger was rumbling underground. The contemporaries MCS had played alongside on Warped Tour or Steven's Untitled Rock Show started getting offered record deals. Emo music was hitting its commercial peak. Fall Out Boy bassist Pete Wentz opened up his own imprint, Decaydence (now known as DCD2), purely to sign Panic! At The Disco.

Within all of this, MCS had their own card to play: the age difference between them and a number of their scene-mates was significant. Pierre was nearing the end of his 20s. His perspective meant he was able to relate to the issues and angst of his young fans, while offering introspection and a level of perspective his peers couldn't manage. For young people looking for an emotional anchor? It was catnip.

This upswing in commercial interest – plus a devoted fanbase cemented by the incessant touring of their early days – quickly made MCS a tantalising prospect to labels. Eventually signing with punk mainstay Epitaph Records, the scope for I Am The Movie's follow up was suddenly vast. Instead of ten days at a studio, they could now spend a total of six weeks in California to create a near-perfect pop record. And on production duties? That would be Blink-182 co-founder Mark Hoppus.

The extra time spent perfecting Commit This To Memory was worth it. The recordings were a formidable step up from an already solid debut release. The sound and production were audibly sharper, from the snare drum to the synths. Pierre’s vocals had filled out, as if ready-made for the radio play they would get on the US' alternative radio stations. More significantly, they sold enough copies to chart on Billboard the week of its release. Ten years later, they devoted an anniversary tour to it, to a fanbase who still held it dearly to their hearts. On the face of it, it was one of pop-punk's premiere success stories.

But despite the band's growing profile, the album was born from a period of unprecedented darkness in Pierre's life. As the band geared up to record the album, the singer was grappling with alcoholism. It's this struggle that underpins Commit This To Memory. There are songs that are angry and ecstatic, there are those awash in alcohol's comedown, there are those that represent the clarity that glimpses of sobriety offered.

The best example of this is perhaps on the somber Together We’ll Ring in The New Year. It’s a sparse track, Pierre’s lyrics the focal point propped up by electric guitar. There is no anthemic chorus or upbeat synth. The words are front and centre, with the narrator resigned to spend the new year at a party don't want to be at, without the mental fog of alcohol to make the night tolerable. It's a stark listen.

Elsewhere on the record, the addict's brain takes control. L.G. FUAD is a metaphorical centrepiece in this regard. The track's inner monologue gives clear insight into the mental struggles of resisting drink, with the narrator resigned to drinking again despite being acutely aware of succumbing to the same patterns again and again. It’s confronted most directly in the line that admits 'but I choose to abuse, for the time being, maybe I'll win, but for now I've decided to die'.

Beyond addiction, there was plenty to empathise with. Lead single Everything Is Alright deals with OCD and the struggle with seeing a psychiatrist. We don’t always vocalise what’s happening inside our brains coherently, suggests Pierre, leading to us being misunderstood by the world. Sometimes we just straight-up lie to avoid having the conversation.

Nostalgia provides the brain with a "neurological loophole" which provides that potent rush of emotion when we reconnect with that music later in our lives. In Commit This To Memory's case, its moments of vulnerability, honesty and openness go some way to explaining why it resonated with so many young people in the first place. Pierre was years ahead of his peers in his exploration of mental health, documenting his own struggles for the benefit of others.

Fifteen years later, Commit This To Memory is as pertinent as ever, cementing the record's place as an essential part of alternative rock's canon.