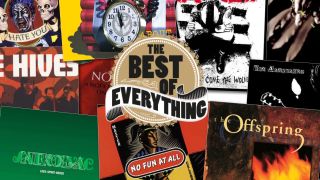 During mid-to-late nineties, Burning Hearts also helped launch international careers for other Swedish bands like The Hives, Turbonegro, Refused, The (International) Noise Conspiracy and No Fun At All. But the first Swedish punk act to achieve any success overseas was Millencolin, following the release of their second album Life on a Plate in 1995.

Shortly after its release, Life on a Plate was brought to the attention of Brett Gurewitz, founder of Californian punk rock label Epitaph Records, who expressed interest in releasing the album in the US. For a group of young musicians who had come of age listening to all the bands on Epitaph’s legendary roster (Bad Religion, NOFX, Pennywise, Rancid and The Offspring), this was the opportunity of a lifetime.

“When we first started Millencolin, Epitaph had all the bands that we loved,” vocalist Nikola Šarčević explains. “So it was a dream come true for us to be on that label. It was a huge deal, and we’ve always looked up to Mr Brett; not only as a record label owner, but also as a songwriter and musician in Bad Religion.”

Attracted by the wealth of homegrown talent on Burning Hearts’ own roster, the Bad Religion guitarist struck a deal with the Swedish label to own the rights to distribute their output in North America, beginning with the re-release of Millencolin’s Life on a Plate in 1996.

The Örebro quartet’s second album For Monkeys then gained overseas release by Epitaph in 1997, and their debut album (re-titled to Same Old Tunes to avoid a lawsuit with Tiny Toon Adventures cartoon company) was re-released in 1998, followed by the compilation album The Melancholy Collection in 1999.

The relationship between the band and their American counterpart label was then cemented with the release of their fourth studio album Pennybridge Pioneers in 2000. Produced by Brett Gurewitz, it was their first record to be certified gold overseas, and it helped establish Millencolin as an international act.

Epitaph has remained their home ever since, and according to Šarčević that’s because they’ve never felt the need to go anywhere else.

“Over the years we’ve gotten to know Brett and everyone at Epitaph really well, and it’s always been a good relationship, so we never saw any reason to leave them. It’s been a great journey so far.”

Who better, then, to discuss the best Epitaph releases than the singer in one of only two bands to have been with the label since day one – the other being Pennywise.

“There’s a few bands like Green Day and Operation Ivy who weren’t on Epitaph,” says Šarčević , “but all the other key punk bands from the ‘90s were on that label, and we bought every album that we could whenever they released anything.”

NOFX – Ribbed (1991)
Nikola: “This was the album that got us into NOFX, and when we heard the first three songs we were just blown away: Green Corn, The Moron Brothers, and Showerdays. It made us want to start our own band, playing that kind of music with humour. We really related to their goofiness, and NOFX had a big influence on the first couple of Millencolin albums, musically and lyrically. They really made a huge impression on the whole band.”

BAD RELIGION – Generator (1992)
“Bad Religion were not only a big inspiration to us when we started, but even on the last album we made last year: True Brew. They made so many great albums, especially in the early ‘90s, but I especially like Generator. We used to listen to that album all the time, over and over again. I think it’s one of the darker Bad Religion albums, even though most of their songs are a bit minor and sad, but this one is particularly dark. Still to this day, I’m amazed how they wrote some of those songs, especially the Mr Brett ones like Generator and Atomic Garden. Their craftsmanship is amazing.”

THE OFFSPRING – Ignition (1992)
“In 1992, The Offspring put out an album called Ignition, which was their second studio album. This was also an album that we used to listen to a lot, and it made a big impression on us. We actually covered the first song on the album Session, and we played it at the first ever Millencolin show. They had something a bit different, even though they had some Bad Religion influences in there, and I really like Dexter [Holland] as a singer: he has a very distinct voice. The album is full of great songs as well, and I especially like the song Dirty Magic. It’s very emotional and dark.”

PENNYWISE – About Time (1995)
“These guys were another band that made a big impression on us, and we liked them a lot in the beginning. They actually took us out on our first European tour back in ’95, which was just when this album was released. It’s a very strong, aggressive and angry album, and the songs have a lot of energy to them.”

RANCID – …And Out Come the Wolves (1995)
“I have to say …And Out Come the Wolves. That album is amazing. It’s one of the best punk rock albums ever made in my opinion. There are 19 songs on it and every single one is great: Maxwell Murder, The 11th Hour, Time Bomb, Olympia WA, Old Friend, all of them. That whole album is just amazing. Operation Ivy were a big inspiration on Millencolin too: they had that ska sound that we had in the beginning. And I think Tim Armstrong is one of the best singers and songwriters around. His voice isn’t perfect but that’s what’s so interesting about it, and I like it a lot.”

DAREDEVILS – Hate You (1996)
“This wasn’t an album, it was an EP, but it’s a release from Epitaph that I think is worth mentioning because I think it’s great. When Mr Brett left Bad Religion he put out the Hate You EP with his project Daredevils, and I thought it was amazing. I was looking forward to the band releasing more material, and I thought a full-length album would come, but it never happened. Nevertheless, the two songs on that EP are great.”

THE HIVES – Your New Favourite Band (2001)
“This record came out, for a while at least, on Epitaph. It’s a compilation of their first two albums Barely Legal and Veni Vidi Vicious, and it came out around the time that The Hives broke big in the America and the UK. The Hives are probably most renowned for their live show, and being an amazing live band, but if you listen to the music then you realise this is a band that has amazing songs. Pelle [Almqvist] is a great singer, too. And they did a great job of promoting Swedish music worldwide.”

NO FUN AT ALL – Master Celebrations (2002)
“No Fun At All are another great Swedish band, and this is another compilation album just like Your New Favourite Band by The Hives. We like this band a lot too, just like The Hives. They’re good guys, and when we first started out we used to tour with them a lot. Some of our first overseas tours were with them, and for a while we were just like one big band. I like the band a lot, and this is a good release for anyone who hasn’t heard them before. They’re another melodic punk band that take a lot of inspiration from Bad Religion and Pennywise.”

**NIKOLA ŠARČEVIĆ – Lock-Sport-Krock (2004)
**“I have to take the opportunity to promote my own solo work here, so I’d like to pick my first solo album Lock-Sport-Krock. That record came out on Epitaph in the States, and it was a big thing for me to record and release. I’m happy that Epitaph wanted to put it out as well. It’s something that I’d been eager to do for quite some time, but it took me a while. I actually have four solo albums out now, and it’s something that has made my musical career worth a lot more. It’s great to have this alongside Millencolin and the punk rock side of me, and for me it was a very natural thing to do even though a lot of Millencolin fans were surprised when this album first came out.”

**TIM ARMSTRONG – A Poet’s Life (2007)
**“This album was actually put out on Hellcat Records, but Hellcat is a sister label of Epitaph that’s co-owned by Tim Amstrong and Mr Brett, so I’d say that it counts as an Epitaph release. The album is great: it’s very upbeat, with lots of rootsy ska and reggae songs. Just like I did on my first solo album, I think Tim also showed another side to himself, especially in the lyrics. A lot of the songs are love songs, and it’s a great album that I’ve listened to a lot over the years. So that’s that!”

Millencolin’s latest album True Brew is out now. The band are on tour this month.

A Short History Of Millencolin