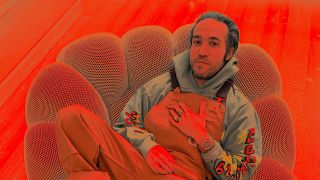 Speaking over Zoom six weeks or so into quarantine, Pete Wentz of Fall Out Boy jokingly describes his current situation as: “boredom interspersed with moments of creative bursts, with a lot of picking up after children.”

One way he’s been keeping creative is by featuring on a track by British electronic duo Cheap Cuts. Called Check Your Phone, it's an irreverent, fast-paced spoken word commentary that grapples with our universal addiction to our phones. It’s been translated into several languages, with Pete writing the lyrics for the lead version.

Taking cues and inspiration from Baz Luhrmann’s Everybody's Free (To Wear Sunscreen),  the track deals with anxieties like loneliness, climate change and social media. It’s landed at a fitting time – with the majority of the world in lockdown during a global pandemic, anxiety is at an all-time high. That anxiety is in turn driving our screen time through the roof – how many weeks in a row, now, has your end-of-week report revealed that you’ve somehow spent even more hours refreshing social media and the news, despite your best efforts?

It’s hard to put our phones down, though, as they’ve become integral to our sanity, keeping us in touch with both our loved ones and the outside world. The lyrics, which Wentz says “came out too angry, or too old man shouting off the porch” when he first tried to write them, are less from a position of judgment and more from dealing with his own addiction to his phone.

“The biggest thing for me is that sometimes when I’m doing nothing or I’m with my family or my friends, I pick up my phone. It’s a tic or something. I don’t really need to do that all the time,” he says. “There’s parts of me that are like, you’re missing out on certain things that you could be more present for. I try not to. I catch myself doing it all the time, I’m like, ‘Why are you picking up your phone right now?’” While he tries to keep his screen time down, and sometimes manages to, he finds himself struggling.

Part of what makes managing our relationship to social media so difficult, especially right now, is that there seems like there’s always news. Plus, the loneliness isn’t helping. “It’s just you and your phone. It’s great, but at the same time, I feel like there’s no new information but tons of new information. Every time I look at my phone, for example, we get asked about Hella Mega [the tour Fall Out Boy were meant to be performing on with Green Day and Weezer this summer], and I’m like, 'there is no information'”, says Wentz.

He recognises the contradiction: “At the same time, so much stuff is happening that it feels like there’s tons of information. It feels like a never ending cycle.”

p.s. ball's in your court - make your version of this video + reply w/ the link here. Gonna be sharing my favs. Here’s the sound on @tiktok_us https://t.co/Ddm9wEGr7X now get to work 👊 https://t.co/uWuCyIfNjr pic.twitter.com/SYxBN36trCMay 2, 2020

Cheap Cuts, the duo who wrote the track, are a new project formed of Jonny Harris and Jack Leonard, who both work as songwriters and producers. Check Your Phone caught Wentz’s attention when a friend introduced him to it. “I was like, ‘this is a really interesting song’. I really love Baz Luhrmann’s Sunscreen, because it’s got all this irreverent advice that makes a lot of sense. For me it was like, this guy is saying all these things that I need to hear right now.”

While he’s been toying with similar lyrics for a while, he had been looking for an outlet outside of Fall Out Boy to use them. “This particular song and the particular words just wouldn’t fit in Fall Out Boy, so I felt like it was something that could be outside of that. As much as people think that we’ll just do anything with the band, there are boundaries and things that just do not seem like they make sense.”

Wentz found that spoken word was the best medium to get his message across, and while the fast-paced, tongue-in-cheek spoken delivery is different to Fall Out Boy, it’s not the first time he’s utilised spoken word. Fall Out Boy fans will remember spoken sections on songs like From Under The Cork Tree’s Get Busy Living Or Get Busy Dying and Folie à Deux’s 20 Dollar Nose Bleed.

“I love poetry. Personally, I love spoken word and I listen to it, too," he says. "Recording this reminded me of recording those old Fall Out Boy spoken words."

Despite the release of Check Your Phone forcing listeners to reconsider their own relationship with their phones, Wentz is still grappling with his. He recognises the positives that make it impossible to switch off entirely: “It gives me a lot of anxiety, but at the same time it gives me a lot of joy and I talk to my friends and I laugh at things on it. To me, it’s the ultimate version of humans being a contradictory species,” he says, thoughtfully.

Wentz then shares an anecdote that summarises that positivity: “My 11-year-old’s friend’s grandpa was in their Fortnite squad last night. It was the most amazing thing. I was like, 'oh my god, the grandpa is playing Fortnite with his grandkids just to hang out with them'. It was awesome,” he laughs.

He has been managing to find some anxiety-free moments of peace in the day: “My best moments in quarantine, besides ones where I find myself laughing or forgetting, is that first ten minutes after I wake up. It’s blurry and I’m not feeling any dread or looking at my phone. I feel just OK.”

He pauses thoughtfully before adding: “but then I remember.”