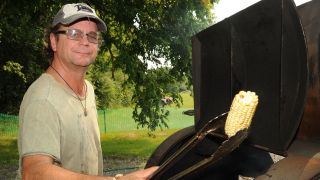 Warped Tour is the largest traveling music festival in America and has come a long way from its humble beginnings in 1995, which saw headliners Quicksand joined by the likes of L7, Sublime and Sick Of It All.

Over the last two decades, the festival has evolved into a pop-punk institution and has launched the careers of Fall Out Boy, Blink-182 and My Chemical Romance.

How did it all begin and what are the headaches associated with running a mobile festival? We quizzed Warped Tour founder Kevin Lyman to find out more.

HOW DID YOU GET YOUR START IN THE MUSIC INDUSTRY?
** Kevin Lyman:** “I was walking through my university campus one day and I discovered this band called TSOL were playing. Right then I was hooked. This was in the early ‘80s. I met some other like-minded people working on the show, and we started talking. Paul Tollett was actually one them, and he set up Coachella Festival here in the United States. On Thursday nights we started driving into LA, to the Whiskey [a Go Go] or The Roxy to see live music. Then we started bringing more bands out to our college campus.”

WAS IT LONG BEFORE IT BECAME A FULL-TIME OCCUPATION?
“After graduating from university I came back home, and someone offered me a job in Long Beach. He said to me, ‘Kevin, you know how to put on shows. You did so many of them whilst you were at university. Why don’t you come and work at this club?’ He offered me $75 cash a night, and I needed the money, so I said yes. The club was called Fender’s Ballroom, and every band was playing there. It was such a dynamic time in music. You had all the punk bands, and alt. rock bands were starting to form. As soon as I started working there I discovered I had a knack for putting on shows. I just fell in love with live music. Still to this day I get goose bumps whenever I put on shows. I always knew I never wanted to stop. But I also didn’t want to work in the clubs forever. I never wanted to become that miserable guy that’s been there too long, you know what I mean? That was around the time there was a tour being formed here in the United States called Lollapalooza. I’d been doing production with Jane’s Addiction, and Perry Farrell [who originally conceived of the festival as a farewell tour for Jane’s Addiction] asked me to be the first ever stage-manager of Lollapalooza in 1991.”

DID YOU PREFER FESTIVALS OR WORKING IN CLUBS?
“I was involved in the first two Lollapalooza tours, and I was still working at Fender’s Ballroom every night when I got back from tour. I really enjoyed the festival setting, but by 1995 I was seriously thinking about getting out of the music business. I was about to have my first child, and people were asking me when I was going to get a real job and become a responsible adult. So I was all set to use that college degree to go out and find a real job and raise my daughter properly. But during what was supposed to be my last summer working in music, I was sitting in the snow at an event where we had snowboarding and skateboarding, and Porno for Pyros [Perry Farrell’s band after Jane’s Addiction broke up] was playing. I’d heard about X Games [an annual extreme sports event also launched in 1995] starting up that same year, and I looked at my friend as Perry was singing Mountain Song and said to him, ‘You know what? This whole lifestyle of skateboarding and music that we’ve grown up with in California; people are going to know about it pretty soon. And we’re going to end up working for someone else if we don’t do it ourselves.’”

TELL US ABOUT THE FIRST WARPED TOUR IN 1995.
“We started talking about ideas then and there, and we ended up getting that tour out on the road within three months. I got my friends in Sublime, No Doubt and Quicksand to all come out. We got a skateboard ramp and brought some skaters out. There was no Vans sponsored involved at that point. We just went out and did it, in 25 cities, and it was a financial disaster. Everybody was like, ‘What the hell is this guy doing?’ But they also thought it was different and cool. Then I met with Vans, which was a shoe company we’d all grown up with in Southern California, and they gave me financial support for the second year. I added bands like Pennywise and NOFX to the bill, and that’s when it became known as a punk rock tour, because those bands gave it that credibility. I still had no money, but we just went out there and did it.”

AFTER 20 YEARS, IS IT DIFFICULT CREATING A BILL THAT WILL APPEAL TO ALL AGES?
“Absolutely. To be honest, about five years ago we went through a little bit of an identity crisis. And last summer I was definitely trying to appeal a little too much to everyone. But next summer in the US you’re going to see a lot more focused line-up. It’s going to be very Warped Tour. Katy Perry’s first tour was on Warped, you know! But I didn’t go looking for Katy Perry. I received a song from her for a movie I was working on, and I said I wanted her on the tour. I think last year I went looking for that sort of thing a little too much, and when you go looking for something, sometimes you force the issue. This year I’m looking to refine things by keeping that bridge from the heritage of Warped Tour and bands like Sum 41 and Simple Plan, who are enjoying a resurgence right now, to the current pop-punk movement with bands like The Story So Far, State Champs, Neck Deep and As It Is. Ultimately, I want to be able to show the history of the festival whilst keeping it exciting and fresh.”

HOW WILL YOU ACHIEVE THAT?
“We try to engage with the kids and encourage them to participate with having a say on who they want to have on the tour. And we try to encourage people with their own brands and entrepreneurial ideas to be involved with Warped, because they’re the people that are going to help keep this music and the lifestyle alive. On top of that, we’ll have roughly 30-40 non-profit organisations involved with every show in the US, and we’ll take four or five of them out to the UK with us. The Teenage Cancer Trust charity team will be at Ally Pally this weekend, too. It’s all about trying to build a community beyond a nine-hour show, and that community obviously evolves and changes. Technology and social media has maybe changed how we need to address certain things, or how we deal with certain things, but in general we try to keep things the same as the way they were when we first started the festival back in 1995. We just adapt with the times, because if you don’t adapt then you become a dinosaur, and you die.”

SOME PEOPLE HAVE BLAMED WARPED AND YOU PERSONALLY FOR THE COMMERCIALISATION OF PUNK. HOW DO YOU FEEL ABOUT THAT?
“Everyone has an opinion. There were bands like the UK Subs who said they would never play the festival, but then they came and played. The Damned came and played Warped Tour at one point, too. But it’s OK. I’m OK with it. There are those bands that will only play in basements, and will never play Warped Tour, and that’s OK, too. Warped Tour has never been for the 10% hardcore of anything. I wouldn’t expect hardcore punks to come to Warped Tour. Hardcore death metal fans aren’t going to come to Warped Tour either. But the 90% of the people who just enjoy a good day and good music, and want to expose themselves to things that aren’t as commercial as a lot of stuff out there; that’s what Warped Tour’s about. Plus I’ve always said to people, ‘Kick my ass and do it better! Put on a better show!’ Maybe people say I killed punk rock, but all I did was go out and put on the biggest punk rock show that’s been put together in probably the last 20 years in the United States. So they can stick that up their asses, to be honest! Most of the people who yap and complain are usually the ones that are sitting on the couch, not doing anything in this world. But I put my money where my mouth is.”

WHAT MAKES WARPED UNIQUE?
“It’s a community. And maybe I had a small part in that. I’ve worked festivals where it was 300 shows a year and it was all an ego trip between bands. We all have an ego, but we’re also lucky that we get to do what we do. And that’s what punk rock is about. If we had half a pizza then we shared it with the other guy. Everyone helped out. Maybe I’m getting old and antiquated, but I think there’s still a spirit of that and it exists on Warped Tour. It’s all about that community feel.”

HAVE YOU ALWAYS STRIVED TO MAKE WARPED ONE OF THE MOST AFFORDABLE FESTIVALS OUT THERE?
“I want to make the festival affordable to the 90% of the people without a lot of money. If there’s 10% that can afford the VIP tickets for whatever, then that’s great. But 90% of the people out there just want to go see a show. I make a nice living. I make a better living than I ever imagined in my life. But I only have simple needs, so if I can give kids a chance to come to my show then I have a financial responsibility to make everything work. If I was greedy and actually took advantage of punk rock, would I still be working in punk rock? I wouldn’t have lasted this long if I was greedy. I’ve been doing this for 35 years now, and I have my brewery (St. Archer Brewery) and all kinds of other stuff going on. But it’s punk rock that allowed me to do it all, and the one thing I will never do is burn those kids.”

NOW, AFTER 20 YEARS, ARE YOU SATISFIED WITH WHAT YOU’VE ACHIEVED AFTER THAN BRAINWAVE WATCHING JANE’S ADDICTION?
“It’s opened up a lot of doors for me, from all of the festivals that I’ve produced over the years to owning my own record label and managing bands, too. But ultimately what I’ve always tried to do is stay around live music. I mean, what’s wrong with getting to do something that you love for the rest of your life? That’s the dream for most people, right? My job allows me to do cool stuff like come over to the UK this weekend and see bands like Creeper and Young Guns at Ally Pally. Life is good.”