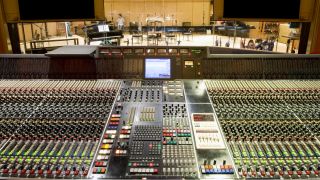 The Who’s frontman Roger Daltrey provoked a debate last week when he suggested that there was no point in the legendary British rock band spending money to make a new album as it would be impossible to recoup that outlay within the current music industry set-up: “I’m certainly not going to pay money to give my music away free,” the singer complained. Daltrey may have a point, but then in the past musicians haven’t always prioritised economics above creativity, with their quest for sonic perfection causing their accountants sleepless nights. Here’s our list of the ten most expensive rock albums ever made.

The first indication that recording the follow-up to Back In Black might not be an entirely straightforward process for AC/DC came when Mutt Lange, the group’s notoriously fastidious producer, spent the first ten days of the session trying, and failing, to capture a perfect snare drum sound for Phil Rudd, before deciding that it simply couldn’t be achieved in the Paris studio they had selected. Three further studios were then selected, and discarded, before Lange decided that actually the band sounded best in the rehearsal room where they’d first played him their new material. Where Back In Black took seven weeks to record, For Those About To Rock… took three months, seriously trying Malcolm and Angus Young’s patience, not least because the expense was mounting. When the album was finally signed off, Malcolm Young commented “I don’t think anyone, neither the band or the producer, could tell whether it sounded right or wrong. Everyone was fed up with the whole album.”

Creation Records originally envisaged that Dublin noise-pop outfit My Bloody Valentine might commit their second album to tape in around five days: how wrong they were. Perfectionist band leader Kevin Shield had a very specific vision as to how his new record should sound, and he saw no need to compromise. In the end, the album took over two years to make, with Shields and co. decamping to no fewer than nineteen different studios in order to capture the optimum performances. The cost of the album was estimated at around £250,000, no small amount for a tiny British independent label, though Shields has claimed that this figure was deliberately exaggerated by the label’s canny hype man owner Alan McGee. Whatever, upon release Loveless was rightly acclaimed as a masterpiece, and Creation would soon be bailed out financially by McGee’s decision to sign superstars-in-the-making Oasis.

One of the most important, influential and commercially successful rock albums ever, The Beatles’ eighth studio album was also one of the most expensive to make. Now solely a studio-based band, having opted to quit performing live, The Beatles were determined to explore all creative options open to them, knowing that they would never be required to reproduce these songs in a concert setting. Together with genius producer George Martin, the quartet spent 55 hours tracking Strawberry Fields Forever, almost as long as they took to record their entire debut album, and emboldened by the success of the song (which they ultimately left off the album), they spent a further six months upon their conceptual masterpiece…during which time a bored Ringo Starr learned to play chess. Their experimentation reaped huge rewards: Sgt. Pepper spent 27 weeks at the top of the UK albums chart and 15 weeks at number one in the US.

Emboldened by the commercial success of 1974’s Sheer Heart Attack, Queen approached their fourth studio album with the explicit ambition of making their own Sgt. Pepper. In order to achieve this, the band elected to work at six different studios, sometimes utilising three separate facilities at the same time. Famously, Freddie Mercury declared that one section of Bohemian Rhapsody alone required a 180 voice chorus: when the top brass at EMI Records heard the track one suit’s response was “What the fuck’s this? Are you mad?” Mercury, however, knew exactly what he was doing: though A Night At The Opera reputedly cost £40,000 (£500,000 at today’s rate) to make, and was considered at the time the most expensive recording ever, Queen were rewarded with their first UK number one album, while the singer’s magnum opus Bohemian Rhapsody went on to sell over seven million copies.

If A Night At The Opera was Queen’s attempt to out-shine Sgt. Pepper, then The Darkness’ second album was the Lowestoft quartet’s own attempt to replicate Queen’s masterpiece. Having recorded their debut album Permission To Land for £20,000, five million worldwide record sales afforded Justin Hawkins’ band rather more financial latitude with its follow-up: “We had the luxury of time and money to do exactly what we wanted,” admitted Hawkins. To this end, The Darkness hired Queen producer Roy Thomas Baker, and set approached the album with the idea that anything worth doing was worth over-doing. At a cost of one million pounds, the band recorded 37 songs for the album, some featuring up to 160 separate guitar tracks, before Baker was entrusted with the task of editing 400 reels of analogue tape down to just 10 songs. The most telling sound on the finished album? That’d be the sound of cocaine disappearing up nostrils… soon to be followed by The Darkness’ career going tits up.

When your album demos alone cost $1,000,000 you know you’re heading for a seriously expensive bill for the finished product. The making of the Foo Fighters’ fourth studio was fraught from the start, with the band re-grouping to record just two months after drummer Taylor Hawkins’ drug overdose in London, but the quartet spent six full months recording 29 songs before deciding that the album they were making just wasn’t very good at all. At one point, feuds in the studio got so intense that Dave Grohl considered breaking up his band, but following a time-out - and a reinvigorating stint drumming for Queens Of The Stone Age - the album was finally completed…albeit that Grohl would later admit that only four songs on the record were genuinely up to par. “It wasn’t our proudest moment,” the singer later confessed.

Following the phenomenal success of 1977’s Rumours album, it’s entirely understandable that Fleetwood Mac lost the plot somewhat when tasked with recording a follow-up collection. Drugs, ‘creative differences’ and tantrums bedeviled the recording process, and when the group decided to record a double album, studio costs spiraled accordingly…not least because the group insisted upon fitting their own bespoke studio within LA’s Village Recorder facility. Upon release, Tusk took on the ‘Most Expensive Album Ever Made’ tag from A Night At The Opera, with costs estimated at $1.4 million. It went on to sell 4 million copies in the US, no mean feat, but something of a bummer for all concerned when placed against the 20 million plus sales of Rumours.

Never the most bashful of groups, Korn proudly bragged that the cost of recording their fifth studio album weighed in at approximately $4 million, an extraordinary total largely explained by the extravagant lifestyles of the Californian musicians, and the fact that they kept a 15-strong crew on retainers for the duration of the recording process. Laying out the bill to the English media, bassist Fieldy explained “We moved to Phoenix and rented five houses for $10,000 apiece for four months. We came to LA, rented five more houses for $10,000 apiece for four more months. We went to Canada and rented a house for $8000. That’s a week, not a month.” The album went on to sell an impressive five million copies, but as its predecessor, 1999’s Issues, topped 13 million sales, this wasn’t exactly champagne cork-popping news for the nu-metal pioneers.

No-one knows exactly how much it cost Def Leppard to record the follow-up to the hugely successful Pyromania, but given that guitarist Phil Collen has gone on record to say that the Sheffield group needed to sell five million copies of the album just to break even, we can assume that it was no chump change. Though some issues arising during the recording process were beyond the band’s control - chiefly drummer Rick Allen losing his left arm in a horrific car accident - an entire year’s worth of material recorded with Meatloaf producer Jim Steinman was consigned to the bin when long-time collaborator Mutt Lange returned to salvage the process, and Lange’s perfectionism is perhaps best illustrated by the fact that three months were spent mixing just one track, Armageddon It, earmarked as the album’s fifth single. The attention to detail ultimately paid dividends though: at the time of writing Hysteria’s worldwide sales stand at a none-too-shabby 25 million.

Whatever one’s view of Chinese Democracy as an artistic statement, it’s indisputable that no-one will ever make an album as expensive again. A ridiculous 14 years in the making, Guns N’ Roses’ follow-up to the expansive Use Your Illusion double set cost Geffen Records a jaw-dropping $13 million in production costs alone, understandable when studio hire weighed in at $50,000 per month, guitar techs were being paid $6000 per month and the album’s recording software engineer was taking home $25,000 per month. Beyond that, there were miscellaneous expenses accountants never factored in originally: who knew, for example, that eccentric guitarist Buckethead would demand a bespoke chicken coop to record in, or that Axl Rose’s personal guru, nicknamed Yoda, would have to approve each track before it was signed off. Don’t hold your breath awaiting the follow-up…