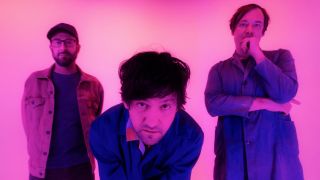 The last fortnight has been relatively quiet after the last few instalments of My Chemical Romance-mania, and honestly, maybe that’s not the worst thing. Us ageing emos need to be somewhat careful with our hearts, after all. Still, they haven’t all actually been taking time off: the Netflix adaptation of Gerard Way’s The Umbrella Academy teased its second season, while Frank Iero and the Future Violents dropped a video for new song Basement Eyes.

While it’s been a quieter couple of weeks, it’s not been entirely dead as far as the emo and pop punk revival is concerned. Here’s what has gone down:

The Used announced a new album...

On February 6, The Used dropped the mouthful of a single, Paradise Lost, A Poem By John Milton. They also announced a new studio album, the band’s eighth, with the very emo title Heartwork. It features massive names, including Mark Hoppus, Travis Barker, and FEVER 333’s Jason Aalon Butler. In a statement on Twitter, frontman Bert McCracken revealed that the new album is tending towards the emo side of things: “The new album plays on the emotions, the sincerity, and the vulnerability of the first record and In Love and Death” he said.

The Used are currently on tour in the US and will be visiting the UK surrounding their stint at Slam Dunk in May. A tracklist for Heartwork reveals some other literary references, like 1984 (Infinite Jest) and Gravity’s Rainbow.

...and sent fans into meltdown by cancelling their European tour dates

We mentioned in the last instalment of Moral Panic that The Used's Bert McCracken had whipped fans into a frenzy by suggesting the band would be supporting My Chemical Romance on their summer tour dates – later to deny it all and insist he was joking.

However, today the band announced that they're cancelling their European tour dates as "an opportunity has arisen for The Used that we absolutely couldn’t turn down", and that there's a "big news update to be revealed ASAP". That has been evidence enough for most to assume it's because they really are joining My Chem on the road. Could it be that McCracken wasn't joking at all?

Now, obviously, neither New Found Glory or Simple Plan are strictly emo bands. But really, who is? They are, however, through and through pop punk bands, a genre which is enjoying a comeback on its own.

The bands announced a joint tour with a funny little video on Twitter on February 11th. The video shows New Found Glory’s Jordan Pundik and Simple Plan’s Pierre Bouvier running into one another outside Pundik’s home while wearing one another’s merch. After fanboying a little, the pair decide to go on a tour: the Pop Punk’s Still Not Dead tour to be specific – if a little on the nose. No UK dates as of yet, but hopefully they’ll sort that out.

Not to be biased, but this very much is saving the best ‘til last. After announcing a full-blown comeback complete with new music in January, Bright Eyes sent all of our little hearts into overdrive. Never ones to disappoint, they’re one of the only bands coming back for a UK tour that won’t set us back hundreds in a 30,000+ capacity venue (sorry MCR). The tour, announced earlier this week, includes dates in London, Manchester, Glasgow, Dublin and Birmingham at smaller venues. You can buy tickets here from February 21st.

Tickets for all Bright Eyes European + US shows are on sale now. 🎫 Full list of dates + ticket links can be found at https://t.co/o8HVo3mYJZ pic.twitter.com/Y9HypVUCTuFebruary 21, 2020