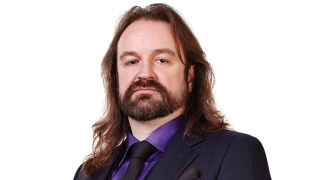 I live on a boat, so home can be absolutely anywhere. At the moment I’m in Oxford, but I do move around, and I just love it.

I was at a school friend’s house in Portsmouth, and there were these pictures of this guy on the wall, shaking hands with Prince Charles and stuff. My mate’s dad said, “That’s my other son, he thinks he can sing.” It was Roger Hodgson – turned out he was my friend’s brother!

First prog record you bought and where?

Supertramp’s Breakfast In America, in Southsea in about 1980.

Gary Numan at Guildford Civic Hall in December ’84. It was my very first gig. I’d drunk a lot of orange juice before, I went right to the front of the crowd, and vomited. This huge pool of orange…

My first Tascam four-track recorder. I was on that thing all day long for years. I don’t keep anything, but I’ve still got that.

The silver suit I bought for the Prog Awards [2014], to present Arjen Lucassen with his Virtuoso award. It wasn’t that expensive, but for me it was pretty extravagant.

The Boerderij in Holland. It’s got such history and it’s a homely venue, for me and so many others.

Other music. I’m never happier than when I’m by myself on my boat with my guitar and a cup of tea. That’s when I become me, it’s my meditation.

Black plastic bags, ever since the toilet leaked on the Threshold tourbus all over all our clothes. The black plastic bag is essential, I have a lot of them.

Talk Talk’s Spirit Of Eden. I listen to the radio and stream music a lot, so it was a long time ago.

In 2014 Ruud Jolie [guitarist from, Within Temptation] and I went to see Yes play Close To The Edge, at the 013 in Tilburg, Holland.

I went out with Heather Findlay [pictured below] for a while, hopefully that counts?!

Journalists. They’re the best drinkers. My first choice would be your editor, Jerry Ewing.

Hawkwind’s Silver Machine. I sang backing vocals on it on record with Dave Brock and Arjen. One of the highlights in my life.

A prog album to get you in a good mood?

Anything by my friends, John Wetton, John Mitchell, Dave Bainbridge. Then there’s Frank Zappa – Why Does It Hurt When I Pee always cheers me up.

I don’t listen to Dream Theater much, but I saw them at the Hammersmith Apollo and they really blew me away.

I’m blind as a bat, dyslexic and I’m no good with stories, so it would probably be any book on playing poker. It’s a mug’s game, but I love poker.

Rick Wakeman’s No Earthly Connection. It’s got this little silver thing that you roll up and so you can see the picture properly. It’s not one of the classics, but I like it.

I’m rehearsing with Adam Wakeman for some shows in February and March, and then in April Headspace are doing some tour dates in the UK and Europe. I’ve finished my work on the next Threshold album, and I’ve got a new, non-prog solo single out, called Impossible.

Threshold to release concept album in 2017