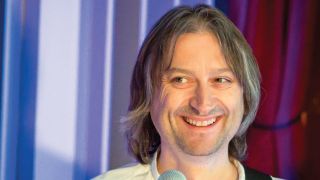 I’ve lived in Bournemouth for 25 years but I was brought up in Sutton Coldfield in the Midlands, and that will always feel like my proper hometown.

In 1977 my brother came home with Genesis’ Selling England By The Pound. He’d play it extremely loud in the house. I was 12 and the minute I heard it it hit home as something unusual and beautiful, I’ve never forgotten that.

First prog record you bought and where?

Steve Hackett on his Defector tour at the Birmingham Odeon in June 1980. I remember it well, I was blown away.

Apart from my iPad, I recently bought a Darkglass B7K preamplifier that gives me a lovely bass sound.

Ernie (The Fastest Milkman In The West), by Benny Hill. I loved it as a kid, and still do.

Either Van der Graaf or Genesis. Or failing that, Anglo-Saxon History.

I flew to Prague to see Genesis on their reunion tour in 2007, because I hate stadium gigs and that was the smallest gig on that tour. It was a great way to say goodbye to them.

Birmingham Symphony Hall. I saw the Blue Nile there a few years ago. I’m very keen to play there, once we can be sure we’ll sell it out.

History and archaeology, I’m forever dragging my wife around old ruins and castles.

Peter Hammill. The best wordsmith in prog and a lesson to us all about making music without compromise. I met him at the Prog Awards and he was a lovely guy.

What do you collect?

I buy too many books, the house looks like a library. I do have a Kindle but it’s just not the same. I’m a bookworm by nature.

Yes’ Tales From Topographic Oceans, Steven Wilson’s remix. I never really rated it but the remix is great, it’s made me re-think that album completely.

I was on holiday in New York in September and saw Haken at the Marlin Room. Their singer is a Bournemouth lad, it’s a small world…

No, but I was in Tokyo with my wife a few years ago and took her to Yes. She got a bit twitchy during Close To The Edge, but she enjoyed it…

David [Longdon] and I set the world to rights and plan things over a couple of pints of beer. And we all went out with Steve Hackett recently in Brownsea Island, which was really good fun.

The Unthanks, they’re a folk band with a slight prog bent. They’ve got an incredible vocal style that I think would fit with us very well.

In the early 80s I used to travel down to the Marquee Club in London to see bands like Solstice and Twelfth Night. I was a young guy and it was such a great, exciting scene.

Red Shift by Alan Garner. I read it when I was 13 and it’s still one of my favourites. A captivating, beautifully written book, very prog.

I love Peter Cross’s artwork for Anthony Phillips, especially Private Parts And Pieces II: Back To The Pavilion.

We’re recording the new album, Grimspound, which’ll be released in April. We’ve got mixing booked in January so we’re trying to get it all ready, I’ve been on a lyric writing frenzy. We’ve been doing lots of interviews [for Folklore], it’s been a good time for us.