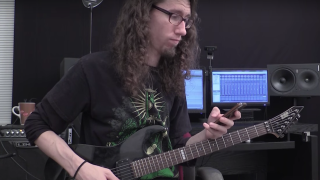 YouTuber ToxicxEternity regularly uploads covers of video game themes, including Pokemon, The Legend Of Zelda, Sonic The Hedgehog and Skyrim.

But ol’ Tox – who is actually called Jack Fliegler and plays guitar in Phoenix tech death metal quartet Singularity – seems to have exhausted all the memorable video game songs and has now turned his attentions to the most heinous of all sounds, the ringtone.

It appears that he loves the default ringtone on his iPhone so much that he’s written a song based around it. If you try and ignore the origins of the melody – tough, considering it’s seared into your memory forever after one listen – it actually could pass for Killswitch Engage.

Could this be the start of a new scene called Applecore? The answer is no.