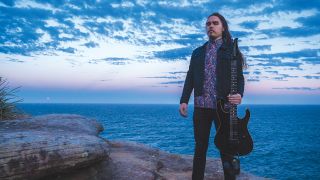 It turns out that James Norbert Ivanyi lives two minutes down the road from another rising Australian instrumentalist. “Plini and I went to see The Aristocrats here a few weeks ago,” says the 29 year-old from his Sydney home. “We’re not super close, but I actually played at his very first gig, so there’s history there.”

Over the past few years and four EPs, Ivanyi has been gaining his own international reputation as an axeman to watch, but he’s wary of the guitar god label. “I’m trying to not make a ‘guitar record’. I care about songs, sounds and music first. I’ve got more progressive over time, but I do like slamming drums, that’s what keeps the metal fans happy.”

His latest three-track EP, Denalavis is a cohesive blend of classic rock and tech metal. Opener Pray Darkly comes in on a Jon Lord-like overdriven Hammond, before those slamming drums and riffs kick in. He’s eclectic too: he reckons James Brown’s funk vibe informed the record, an etiolated take on Satie’s Gnossienne No 3 opens Malignant Inhabitants, and Petrucci’s shadow is cast over Terraform Diminution.

Ivanyi discovered Pantera and Opeth in his late teens, but really cut his teeth on his dad’s records – Led Zeppelin, Pink Floyd, Rush, Genesis and Yes. Tragically, his dad was murdered at his home in Indonesia when Ivanyi was 18. Traumatised, he dropped out of school and immersed himself completely in music. It was his mother who got him enrolled in the Australian Institute Of Music, where he could get both a degree in music and his High School Certificate. “She saved me,” he says now. “I came to realise that people go through terrible things every day, and death is part of life. Dad was an artist, and within his own niche scene, he was very well respected.”

So there’s a parallel between father and son. Ivanyi has opened for the likes of Katatonia and Soilwork in Sydney, he played this year’s inaugural Guitar Collective concert in Anaheim and at UK Tech-Fest in July (his first visit to Europe), and he’ll tour Australia again in August. “Australia’s the size of North America, but with five major cities,” he says. “It’s a big investment to fly a band around, but there’s a love for music here – it’s well worth it.”

All Around The World: Meet Jug Bundish, the Costa Ricans who dig far-out sounds

All Around The World - Jupiter Hollow from Canada