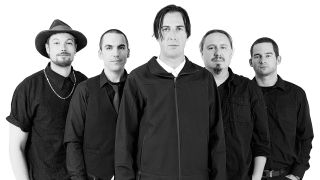 From 21st Century Schizoid Man’s tirade against the Vietnam War, through Pink Floyd and Marillion, right up to Steven Wilson’s recent crossover hit, prog artists have long addressed sociopolitical issues, with lyrics going far beyond the stereotype of songs about hobbits and wizards. The grand scope of progressive music has proven to be fertile soil in which to plant lyrical seeds of doubt, despair and hope.

London-based band IT (pronounced ‘it’) released their fifth album We’re All In This Together back in March, the latest in a trilogy which meets the modern malaise head on. Frontman and lyricist Nick Jackson faces down austerity and inequality on the album.

“I come from a political family,” he explains. “My father’s a political science professor. I grew up with politics around me so my style of writing is more socially conscious.”

He laughs self-deprecatingly. “Trying to put the world to rights!”

The Canadian started IT as a solo psych-pop project in 1993, recording two cassette-only releases. After a period of touring multimedia performances with guest musicians, the first official band release came out in 2002, with Jackson’s prog influences coming more to the fore. This release, Over And Out, flows as one song, a self-confessed “Floydian pastiche”, replete with newsreel excerpts, voiceovers and gospel vocals.

2009’s Departure saw the arrival of Andy Rowberry on guitar, and the newly forged writing partnership resulted in a more aggressive sound suited to its vitriolic attack on the Iraq War.

The spark for follow-up We’re All In This Together was ignited by 2011’s London Riots. “When that happened we were still doing interviews for Departure,” explains Rowberry. “It was on the news while Nick was doing a Skype interview with some lady in New York. She was seeing it on the news. We were having a text conversation with each other. ‘This was happening up the top of my road! It’s on my doorstep.’ Suddenly you think, ‘Now we have something to focus on.’”

Jackson adds, “That was the catalyst and the symbol of the entire record. Departure was lyrically much more about global events whereas We’re All In This Together is more England-focused, localised. It really brought it home for us.”

The album pre-order included a lavish deluxe edition with bonus DVD. Visuals have always been an important concern for IT, even from those early live performances. The aesthetic of the deluxe package fed symbiotically into the music.

“It was a collaboration between myself and Melissa Connors, a photographer friend in Canada,” says Jackson. “We flew her over and she and I went to Liverpool and got all those street scenes of abandoned houses. Melissa and I started working on images for the different songs even while I was still finishing verses, which is great because it helped me to get an overall visual and would help me focus.”

“It’s not just there to look pretty, to cover the fact that we’re all ugly,” jokes Rowberry. “It all ties together.”

IT all ties together very well, Andy.

Stray From The Path: Nazis, death and politics