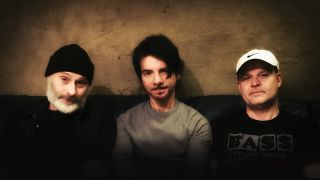 Prog is by no means a formula-free musical genre, but the greatest bands always seem to defy easy categorisation. Stockholm’s Brother Ape may occasionally exhibit an unapologetic debt to the giants of 70s prog and the big riffing grandeur of Led Zeppelin and Deep Purple, but the amount of musical ground covered on their new album Karma indicates a much more adventurous mindset: those recognisable tropes arriving embellished with all manner of fascinating stylistic quirks and unexpected detours.

“The wonderful thing with this band is that we think the same when it comes to music,” says singer/guitarist Stefan Damicolas. “I guess it’s just a little bit easier this way. I would describe it as if we were on a musical journey. We make the music that inspires us at this moment, no matter what style or mood it is and no matter what people say. As time passes, ideas and feelings change and we adapt to that. The idea of staying in some sort of confined space is both impossible and rather stupid! You just end up with half-hearted stuff that way.”

The creative freedom that Brother Ape enjoy as a matter of principle means that songs on Karma often sound like they are expanding and evolving in real time, as simple ideas blossom into grand but elegant sonic landscapes. Perhaps unusually, striking that balance between meticulous songcraft and freewheeling abandon seems to come naturally to the Swedes.

“There was a time when we just went into our studio, the Monkey Cave, and just improvised, jamming all the time, developing our musical skills in both listening and playing,” Damicolas recalls. “The improvisations could go on for hours. There are always new things to learn and we are learning all the time and that’s what makes it all so exciting.”

Veering from the artful hard rock of Sixteen and the fidgeting funk of Let The Right One In to the skittering beats and pop pomp of Hina Saruwa, Karma showcases a notably different sound from the one established on earlier Brother Ape albums, albeit one still familiar enough to fans to avoid alienating them entirely. As Damicolas explains, the album’s diversity was an inevitable result of some very modern modes of disseminating new music.

“After the release of [sixth album] Force Majeure in 2013 we got into some heavier stuff, inspired by our oldest heroes like Zeppelin and Purple,” he explains. “It was fun to make those kinds of tunes and it was a bit of an adrenaline kick for us. We decided to release them as an EP, only available through the internet. Then we released another two EPs, each with another four songs. The third EP was more progressive and we used that one as the body for Karma, added songs that had the right mood from the other releases and I wrote two new songs in that same spirit. I think it still sounds Brother Ape overall.”

Although the new album has some dark moments, it’s an otherwise pointedly uplifting affair, full of spine-tingling dynamics and revelatory moments where melancholy erupts into joy. Given the tense and fractured state of the world at this point in history, Brother Ape’s simple but strong message of positivity, unity and wide-eyed spiritual enlightenment could hardly be timelier.

“Our philosophy? We are a truly positive bunch and most of our songs have a positive message,” Damicolas concludes. “Each song on the album has, in one way or another, something to do with karma. The song You Are is my version of ‘What you give is what you get’ and the song Karma is about the way we treat our planet. If we don’t treat it well, the karma will be devastating. Brother Ape stands for the equality in all of us on this planet. Not only brothers, though… sisters too!”

Sounds like: Immaculate, exploratory prog rock with shades of jazz, pop and everything in between

Current release: Karma is out now on Freia Music

Limelight: Why is soundtrack composer Steve Gibbs moving over to prog?