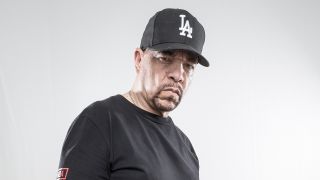 In 1992, Body Count courted the wrath of the media and the government with Cop Killer, a song written in protest at the escalating levels of police brutality towards young black men. Twenty five years later, we ask Ice-T whether politicised metal will take centre stage again.

Do you think the state of the world in 2017 will lead to more political statements in metal?

“It happened in the 60s, man. It happened in the 80s. It happens when politics is so real that you can’t get around it. When the Vietnam War was going on, it was kinda hard to sing, ‘Don’t worry, be happy!’ Shit was too real. When shit gets real, I have to address it. My opinion about political shit is that everybody should be political.”

How important is it for you to make political statements in your music?

“I think I would get bored if everything was political. Everything I do is very something, you know? Ha ha ha! If it’s sexual, it’s very sexual. If it’s violent, it’s graphic and extreme. So if I get political, I’m gonna get extremely political. The way I remain sane is that I try to channel all the things I’m dealing with, whether that’s personal shit or my love of horror and action movies, and I talk about politics, too. But I’ve never been as political as, say, Public Enemy, because then I’m not allowed to do a stupid record or a fun record, because I would get pigeonholed.”

Do you have to brace yourself for criticism when you get political?

“Every once in a while you’re gonna get someone on Twitter that says, ‘Just stick to acting and stay out of politics!’ There’s an overall view that celebrities shouldn’t be making political statements. I’m like, ‘OK, and plumbers should?’ Ha ha ha! At the end of the day, when celebrities make statements they’re taking a risk with their careers and I think they should be applauded. If I come out and say ‘Fuck Trump!’ I’m polarising myself. If I really cared about the money, I wouldn’t say anything. It doesn’t matter what the fuck you do, someone’s gonna argue with you, so you might as well say what you feel.”

Does metal feel a more natural home for your political songs than hip hop?

“Hip hop has basically turned into dance music. It turned back into disco. Radio doesn’t want us saying anything. They won’t play the big political records. But I think everything moves like a pendulum. You can only make fun party music for so long before it has to claim back that political element. What we need is a young, 19-year-old Public Enemy. We need metal bands that are in their 20s and talking shit. It can’t be us anymore because I’m as old as your dad! We need that new blood of activism in music and we need it badly.”

What would you say to people that argue that you’re a rich man, so you shouldn’t be speaking out on social issues…

“The question is: where is your heart? Rich is a state of mind. You lack compassion and you don’t care about shit. So if someone says ‘Fuck Ice-T! He’s no longer one of us!’ Ha ha ha! Man, I’m black! The cops will snap me out of the car and shoot me dead in the street. If I was rich, why would I make Body Count records? Why would I ruffle feathers if I didn’t give a fuck? Why not just kick it on the golf course and chill?”

Do you think people underestimate the power of lyrics in heavy music?

“You should always take advantage of power when you have it, because a lot of people don’t have it. When I first started rapping and making music, I didn’t know I had power. I didn’t realise that my words mattered. Then I sold a million records and my next album was called Power! Ha ha ha! I’m now aware that what I say matters so I always put the lyrics with the record so people can see what we’re saying. If you’re doing death metal growls, at least give me a lyric sheet so I can growl along with you.”

What’s the secret to writing political songs that have credibility?

“You know what it is? I can see life from two different sides. I saw it from the broke side and I lived my life with a lot of broke people. There’s a lot of anger and there’s a lot of aggression against the wealthy. Then you get some dollars in the bank and you find yourself around people with money and they make you even more angry, like, ‘No! That’s what you think, for real?’ So I’ve seen it from both sides and that’s why you get a more educated view from me than just saying ‘the cops hate black people’. They’ll beat up a poor white kid in some trailer park, too, because they know there’s no repercussions. That’s deeper than racism.”

We’re guessing that you’re not a fan of Donald Trump. Fair?

“You know what he is? When people say they don’t like rich people, that is who they’re talking about. People who think they’re better than everybody else. The fucked-up thing about Trump is that he wouldn’t let any of the people that voted for him into one of his hotels. He wouldn’t even make eye contact with ’em. He’s just a piece of shit! Ha ha ha! He’s not a nice person. He wants to be king, you know? Like I say, the pendulum swings. Bush was a reaction to Clinton, Obama was a reaction to Bush. Give it three years and he’ll be out of there. His fans will turn on him, trust me.”

What advice do you have for young bands that want to take a political stand?