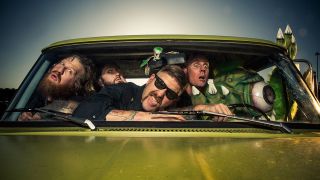 This is Mastodon’s debut appearance at Bloodstock. How does it feel to go straight in as Saturday night headliners?

It’s pretty amazing. When they told us it was like… [laughing nervously], “Are you sure?” It’s really exciting, but at the same time I worry. Oh, man.

Which of the other acts will you watch?

Gojira, definitely. Paradise Lost and Fear Factory are also there on our day. We’ll be pretty drunk by the time we go on.

How is work going on the follow-up to the Once Around The Sun album?

We’re about five months in to the new album, and right now it’s still at the jamming and improving things stage.

You and guitarists Brett Hinds and Bill Kelliher recently appeared in an episode of Game Of Thrones. What kind of reaction did you get?

[Laughs] I had forgotten to tell a lot of my friends, so there were a lot of text messages. The gist of it was: the biggest and coolest show on television – how the fuck did you get on to it?!

And the answer is?

There are a lot of metalheads on that show. We played Sonisphere one year and a lot of the cast members were there. One of the writers, Dan Weiss, is a huge Mastodon fan. They were filming in Ireland and our tour started there. We got to spend a fourteen-hour day dressed as wildlings.

After three Grammy nominations and with each album more anxiously awaited than the last, how do you avoid that becoming a pressure situation?

It’s okay to have pressure. It’s not necessarily a bad thing. It keeps you in check a little bit. The bottom line remains the same: we still want to create something amazing, and that never goes away.