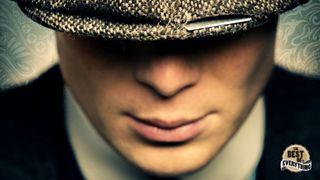 An epic gangster saga, centred around the fortunes of the Shelby family in Birmingham, Peaky Blinders is one of the sharpest, best-written and most enthralling drama series ever seen on British television. Laced with copious amounts of sex, drugs and brutal violence, it also features the finest soundtrack ever to grace a BBC production. As the series returns for a third season, here are ten of the best songs scoring the Shelby clan’s rise from the gutter.

NICK CAVE & THE BAD SEEDS – Red Right Hand
(Peaky Blinders Theme)
First appearing as the soundtrack to Peaky Blinders’ iconic opening scene – with a suited and booted Thomas Selby riding a black horse into a post-World War I Birmingham slum – Nick Cave’s doomy, ominous 1994 single from the superb Let Love In album could hardly be a more perfect fit for the series, with the lyric “On a gathering storm comes a tall handsome man, in a dusty black coat with a red right hand” offering a portentous glimpse of the drama set to unfold. Cover versions by Arctic Monkeys (originally recorded as a B-side for 2009 single Crying Lightning) and PJ Harvey (recorded exclusively for the show’s second season) also feature in the series.

THE WHITE STRIPES – Black Math
(Season 1, Episode 2)
When news spreads that Thomas Shelby is fixing races for his horse Monaghan Boy, the residents of Small Heath can’t hand over their money to the Shelby family’s illegal bookies quickly enough. This rollicking, hard-riffing cut from The White Stripes’ fourth album Elephant serves to capture the frenzy in the backstreet gambling den.

TOM WAITS – Time
(Season 1, Episode 5)
When a visit from the Shelby’s long estranged father ends in betrayal, his eldest boy Arthur is so distraught that he attempts to hang himself in a backstreet boxing ring. Tom Waits’ haunting Time, recorded for 1985’s Rain Dogs album, offers an almost unbearably poignant background to the scene, not least with the lyric “It’s raining hammers, it’s raining nails, it’s true, there’s nothing left for him down here.”

JACK WHITE – Love Is Blindness
(Season 1, Episode 6)
Jack White pretty much owns season one of Peaky Blinders, with multiple tracks from The White Stripes and The Raconteurs scattered through the series, but arguably his most affecting contribution is his cover of Love Is Blindness, a cover of the closing track on U2’s Achtung Baby album. White’s version was originally recorded for a tribute album commissioned by Q magazine, and later appeared on the soundtrack to The Great Gatsby, but it’s never sounded more powerful than here, introduced as Thomas Shelby types out the words “I learned long ago to hate my enemies, but I’ve never loved one before….” on a letter to his duplicitous girlfriend Grace.

JOHNNY CASH – Danny Boy
(Season 2, Episode 1)
Beloved of maudlin Irish drunks, though written by an English lawyer, Danny Boy is perhaps one of the most cloying, overly sentimental songs ever written, but when covered by Johnny Cash on his final studio album, 2002’s American IV: The Man Comes Around, it acquired a new-found dignity and gravitas. In the opening episode of series two, it’s employed for the lingering minutes Thomas Shelby hides in the shadows of a steelworks, before popping a bullet in the head of one Eamonn Duggan, under instruction from the IRA.

ARCTIC MONKEYS – R U Mine?
(Season 2, Episode 2)
Bearing the influence of their friends Queens of the Stone Age, this cut from the Monkeys’ 2013 album AM plays over a ‘the story so far’ recap montage at the opening of an episode which sees the Shelby family extend their operations into London.

ROYAL BLOOD – Out Of The Black
(Season 2, Episode 3)
The most troubled member of the Shelby clan, plagued by hellish memories of World War I, Arthur Shelby’s dependence on drink and drugs is a constant worry for his family. Royal Blood supply the soundtrack to Arthur enjoying a breakfast of cocaine and whiskey in his bar, The Garrison, before being confronted by a gun-toting, grieving mother. Just another standard day for the family.

PJ HARVEY – Long Snake Moan
(Season 2, Episode 4)
Just as Jack White’s music dominates season 1 of Peaky Blinders, season 2 belongs to PJ Harvey. In this episode, Peej’s filthily grinding Long Snake Moan is used to accompany a scene in which Thomas interrupts his elder brother Arthur during a drug-fuelled sex session and gets a revolver pointed at his head for his ill-manners.

RADIOHEAD – You And Whose Army?
(Season 3, Episode 1)
With Peaky Blinders now a huge international success for the BBC, details about the eagerly awaited third season, set to air tonight on BBC2 (and Netflix in the US) have been as closely guarded as Shelby family secrets. Having attended a screening of the first episode however, TeamRock can reveal that the action has moved on two years from the thrilling climax of season 2, opening with Tommy Shelby’s wedding to the love of his life. In true Peaky Blinders fashion, trouble is perilously close at hand, however. The episode’s dark denouement is soundtracked by Radiohead’s You And Whose Army? from 2001’s Amnesiac album, with Thom Yorke’s lyric “Come on if you think you can take us all on” entirely apposite for a series which will see the Shelby family imperilled as never before.

Peaky Blinders airs on BBC 2 on May 5 at 9pm. All six new episodes will be available to stream on Netflix from 31 May.