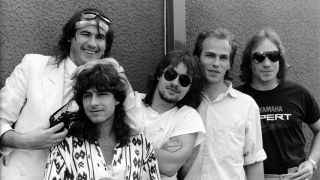 If progressive rock bands are supposed to be boring, nobody told Marillion. The making of their classic album Misplaced Childhood – in early 1985, at Berlin’s Hansa Studios – was effectively one almighty bender. Singer Fish led the debauchery, blowing his wages on hookers, sampling heroin for the first (and last) time, stripping naked in a bar to win a bet, crashing a car in a race round the city, and throwing bricks over the Berlin Wall in an attempt to set off landmines.

Marillion might have been inspired by the music of Genesis and Yes, but they could party like Guns N’ Roses. Formed in Aylesbury, Buckinghamshire in 1979, the band were originally named Silmarillion after a posthumously published work by JRR Tolkein.

The name was shortened in 1981, the same year that charismatic Scotsman Fish (born Derek William Dick) joined the group. After signing to EMI the following year Marillion released four studio albums – all of them UK Top 10 hits – before Fish left for a solo career in 1988. His replacement Steve Hogarth, formerly of The Europeans, has now been Marillion’s frontman for over three decades.

Yet Hogarth will always be considered ‘the new guy’, such was the impact of the music that Marillion made with Fish, especially Misplaced Childhood and its hit single Kayleigh, a song which had the singer credited for inventing an original name. As he recently commented: “I’ve got used to signing autographs for 13-year-old Kayleighs.”

In the Fish era, Marillion were standard bearers for progressive rock, but with Hogarth the band have been progressive in the broadest sense. Their music has evolved far beyond those primary influences, and after being dropped by EMI in 1996 Marillion created a new, internet-based business model that has seen them thrive as an independent cottage industry. Eight years before Radiohead sold In Rainbows exclusively online, Marillion financed their album marillion.com by inviting 30,000 fans on their database to pre-purchase the album before it was even recorded.

It’s ironic that a band once derided for sounding like the dinosaurs of 70s rock should prove to be pioneers of the internet age. But this forward thinking has secured Marillion’s future: 2016's Fuck Everyone and Run (F E A R) was a new creative peak, and the following year the band sold out London's iconic Royal Albert Hall in minutes.

In the finest progressive rock tradition, Marillion’s greatest work is a concept album. It started with an acid trip: an hallucinating Fish envisioned a child in soldier’s uniform, and from there flowed a narrative that ranged from the personal (old love affairs, rock star ennui) to the global concerns of the Cold War.

It inspired a brilliant ensemble performance from the band. And, despite initial concerns from EMI over the dated ‘concept album’ format, Misplaced Childhood was a huge success. Their only No.1 album, it produced two hit singles in Kayleigh and Lavender. Artistically and commercially, Misplaced Childhood is Marillion's Dark Side Of The Moon.View Deal

“All the songs were drawn from inspiration on the road or from bars,” said Fish of the album that proved to be his last with Marillion. Consumed by booze and drugs, the singer became alienated from the rest of the band, no puritans themselves.

But from his stated position – that lonely place “at the end of the bar” – Fish wrote the finest lyrics of his career. The cocaine itch in Hotel Hobbies, the transparent revelry of Incommunicado, the desperate homesickness in Sugar Mice, all were brutally honest entries in the diary of a lost soul. The music was wonderfully atmospheric and beautifully weighted.View Deal

Released at a time when Genesis were having mainstream pop hits, Marillion’s debut was a homage to the Genesis of old. Four of the six tracks stretched over eight minutes, incorporating smart-arse time signatures, while Fish adopted the stagy mannerisms of Peter Gabriel to deliver his wordy poetry.

Garden Party was an uproarious satire of class snobbery, Forgotten Sons a searing indictment of the British army’s presence in Northern Ireland, the epic title track was a frank admission of romantic failure. At a stroke, Fish was a cult hero and Marillion were Top 10.View Deal

At times, FEAR (Fuck Everyone And Run) suggested that Marillion had taken all the most emotionally potent and fervently dynamic moments from this line-up’s 27 years and moulded them into some new, exponentially emboldened form.

From wonderfully fluid opener El Dorado to the incensed sprawl of The New Kings, FEAR is both deeply moving and quietly thrilling: the sound of a veteran band completely engaged with their music, their world view and their reasons for giving a shit.View Deal

Marillion without Fish? It didn’t seem right. Many diehard Marillion fans were sniffy about Steve Hogarth: he’d been in pop bands. But Seasons End put the doubts to rest. Hogarth had his own style, more naturally melodic than Fish, and if his lyrics (co-written with friend John Helmer) lacked his predecessor’s idiosyncratic edge, there was a sly dig at Fish in The Uninvited Guest.

Musically, Seasons End was a subtle progression, peaking with the elegant Easter and a green-themed title track developed from Beaujolais Day, a song the band demoed with Fish in 1988. Seasons End charted at No.7.View Deal

Famously, Marillion’s self-financing model was cited by writer and social psychologist Malcolm Gladwell as the moment when a new proposition for the music industry began to emerge. He would be pleased to know that 17 albums into their career, the band were still bursting with ideas.

The songs drip with longing and regret, and no one delivers those emotions quite like Marillion. In 2012, Sounds That Can’t Be Made was voted Album Of The Year by readers of Prog magazine, also finishing in third place in the corresponding writers’ chart.View Deal

After 1991’s pop-oriented Holidays In Eden alienated some long-standing fans, Marillion went back to their roots with Brave – a concept album, no less – inspired by a news story about a young woman who had been picked up by police on the Severn Bridge and either did not know her identity or refused to reveal it.

“I thought it was a great first page to a mystery story,” said Hogarth, who subsequently constructed a “fictional documentary” of the woman’s life. This weighty subject matter was matched by some of the most complex and emotionally charged music of Marillion’s career.View Deal

Marbles was conceived as a double album, but even as a single CD, minus four tracks, it’s stunning. Thirteen-minute opener The Invisible Man is a modern progressive rock classic, combining the lyricism of Wish You Were Here-period Floyd with the dark ambience of Massive Attack.

There are fine songs throughout, with You’re Gone and Fantastic Place both sounding like a subtler U2. The title track is full of quintessentially English black humour. And to finish, there’s another brilliant extended piece, Neverland.View Deal

With the noteable exception of Oasis’s The Masterplan, B-sides albums are mostly rubbish. Marillion’s, however, is mostly good, and includes two of the band’s best-loved cult-classics. Market Square Heroes was actually an A-side, the debut single, left off the first album but always a live favourite. The B-side to it was Grendel, a 17-minute, Rush-style epic based on the Anglo-Saxon poem Beowulf.

In honour of this song, the band invented the lethal ‘Grendel’ cocktail, coloured bright green by crème de menthe, heavily laced with various spirits, and – alarmingly – always served by the pint.View Deal

Marillion went straight for the mainstream with the second album of the Steve Hogarth era, and in truth the results were mixed. The rockier songs – Holidays In Eden, This Town – were uninspired, and The Party, Hogarth’s study of lost innocence, lacked the incisive quality of Fish’s Warm Wet Circles.

On the plus side there were several fine songs that benefited from Christopher Neil’s slick production Three singles were released – Dry Land, No One Can and the U2 rip-off Cover My Eyes (Pain And Heaven) – but none reached the Top 30. Clearly Marillion were not cut out to be pop stars.View Deal

Not many bands can still cut it when they’re 25 years into their recording career. Marillion are one of the few who can. Their 14th album received widespread acclaim. It was quite a turnaround for a band whose profile had slipped so low since the mid-90s that Steve Hogarth admitted, only half-jokingly: “Most people thought we’d split up in the 80s!”

Somewhere Else features some of the most beautiful songs the band has ever recorded: Faith, Thankyou Wherever You Are, and the expansive title track. “Marillion deserve a fair hearing,” said one critic. Oh, the irony.View Deal