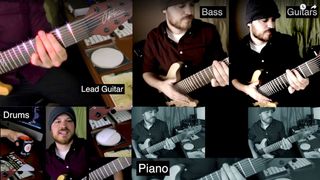 Renowned internet axe hero Rob Scallon is back with his latest musical adventure, and this time he’s tackling Queen’s Bohemian Rhapsody armed only with his trusty guitar, a computer mouse and a coffee mug.

Using an original 13-second sequence in which he plays a note on his guitar, thumps his mouse mat, taps his mouse on the table and slams that coffee mug down, Scallon painstakingly assembled his cover of Bohemian Rhapsody note-by-note, speeding up or slowing down the audio in order to hit the right notes.

“The sound and video edits here were actually done separately for the sake of sanity,” says Scallion. “But everything within the audio is from that first 13 seconds of footage using pretty minimal audio editing. Each note is just speeding up or slowing down that original note to get different pitches, hence why the high notes are so short. The drums had some EQ to them, and everything got reverb and a bit of mastering.”

The end result, assembled with patience-testing skill, has a Bontempi-esque feel that’s a world away from Queen’s multi-track original, but it does have a large amount of primitive charm.

Rob Scallon: you’re a nutter, but we love you.