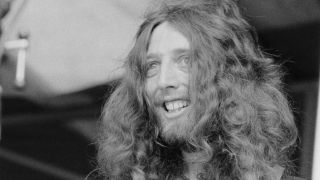 “I lived in a hippie household as a kid and from a very early age I loved prog rock. I grew up listening to Jimi Hendrix and Led Zeppelin and progressed onto Mahavishnu Orchestra, Chick Corea and Return To Forever. John McLaughlin was one of my all-time favourite guitar heroes to begin with, then I discovered and absolutely fell in love with Steve Hillage. His stuff had amazing time signatures, linked in with bleepy keyboard stuff and superb guitar solos. My best mate and his family introduced me to Gong and Hillage when I was about 14. I was immediately captivated by him.

"I saw him quite a few times; the most memorable was at the Rainbow Theatre in ’77. He’d just brought out Motivation Radio and was playing with Joe Blocker, who set his drum kit up side-on so you could see the drumming from a different angle. It was an extraordinary gig, he was at his peak, his pomp.

"I left Hillage behind after Open, his System 7 stuff wasn’t for me. But I did see Gong when they played The Forum in Kentish Town in 2009. I went to school with Chris Taylor – the most extraordinary left-handed drummer I’ve ever known who went on to play with Roachford – and I heard he was in Gong. I contacted him and he invited me along to their show. So then I got to meet my all-time hero! It was really lovely, Steve was such a gentle man… what struck me was how soft his hands were. That sounds mad! Miquette Giraudy was thrilled to bits to find that me and my life-long best mate Johnny Rutter had been at that ’77 Rainbow gig, she remembered it well as a really good gig. She was touched that there were still some people out there who had seen them play at the Rainbow.

Meeting a hero can be disappointing. But I’ve had some retweets from him on Twitter and it makes me go all goosebumpy, but I wouldn’t tell him that! It would be a dream come true to play with him but he’d have to be gentle with me. It would make a very happy man old, ha ha! He’s under appreciated and such a talent.”